A few photos from a ride I did in South Africa October 2018.
I rented a BMW G310 and toured Johannesburg to Cape Town ten days.

Riding through Leslotho was incredible.

Sani Pass was some of the more challenging riding I have done, glad to be on a light bike on the very steep loose surface.
Alas I lost (had stolen) most photos from the descent.

The scenery was fantastic every day. The weather mostly good but colder than I expected.
The roads and riding however were better than I expected. Food was cheap, top shelf South Africa wine at very low prices.
Some towns were safe, some edgy and some completely lawless and dangerous. I had some trouble but was lucky.

Oh my; those beaches.
OK, bucketlisted.
Good to have you with us Iron Chef.

Hello chef.
You had your camera stolen?
Do you mind detailing your 'edgy', 'completely lawless' and 'dangerous' observations? Places to avoid perhaps.
What was your overall impression of the G310?
Best wishes.

2wheels said:
Hello chef.
You had your camera stolen?
Do you mind detailing your 'edgy', 'completely lawless' and 'dangerous' observations? Places to avoid perhaps.
What was your overall impression of the G310?
Best wishes.
Click to expand...

I've ridden all over the world but some places in SA were sketchy. But it was beautiful and I absolutely will return to see more and ride Namibia and other counties to the north. But I will join a group. I was asked probably every day "you are riding alone!?". To mention a few things that happened.

I had my iPhone stolen while held with knife at my throat in Port Elizabeth. The short version - I was outside an apartment hotel waiting for someone to open gate when two black men attacked me and demanding my valuables, then a car arrived and they moved away pretending nothing was happening. I ran, jumped on my bike and took off with helmet in hand.

City highway traffic lights men are loitering and when I stop on bike they get up and walk towards me holding items like blankets and steel pipe or small knives. I had to gas it and run the lights couple times, fortunately not hit by other traffic. I started to stop 200 metres back from lights and wait for them to turn green.

In some regional towns I went to try find a place for lunch but middle of town is not safe and had thugs come at me if I stopped even at intersection. I switched to waiting for a big town that had a supermarket that was inside a gated compound. Seems that is where the white people shop and eat.

I tried to walk to pub for dinner in a couple of regional towns as I had chosen B&B's quite close but was told it's too dangerous, ride your bike. I parked it at one pub then a group of black men went back and forth, asked bartender can I push it in courtyard. Sure enough 10 minutes later they came back holding huge steel pipes then in a rage the bike was not there went down road smashing things. Never saw any police in any regional towns.

Cape Town seemed not bad in daylight so after dark I thought I would walk two blocks to KFC , but at night everything was shuttered and the place suddenly looked like a movie set on 'Escape from New York'. I soon had men come at me from shadows and I quickly retreated to my hotel. Well fortunately the room service was good and the South African wine terrific. In Johannesburg I rode that hop on/off bus and went to visit the tallest building but staff from bus said I had to wait and they would escort me as not safe, indeed in the CBD some streets had like snow of broken glass on the footpaths and looked like ghetto.

You should go if considering but crime is considerable and brazen.

The G310GS was fun. Light is right off road (for me) and I was so glad I chose that to descend the Sani Pass not something heavy. On the highway I think it is not so good, fuel range plummets once riding at 120kph which was nearly wide open throttle. But on the twisty roads it handled well and fuel economy was good at lower speed and on the gravel it was very easy.
A

Thank you Iron Chief for you contribution.
South Africa looks like a great country in which to ride! Pity about the crime situation.
It is a shame it is just another example of a failed "Post-Colonial" state - so particularly common of Sub-Saharan Africa.

Thanks for the details Iron Chef.
Prior to Wuhan I had everything ready for a three week solo ride there, which has been put on 'hold'.
Your info is making me reconsider.

Are you able to tell me from what company you rented your BMW?
Use private message if you prefer not to go public.

Crime is everywhere, for instance during Memorial Day Weekend 2020 (May 29-June 1), in Chicago, Illinois when 85 people were shot, 25 killed.

Three journeys through RSA for me since 1998 I've escaped serious crime. In 2017 I accompanied a "wannabe motorcycle adventurer" who was so fearful of crime on his person that some days we would travel less than 25 miles, his running to and hiding in gated and secured hotels he'd booked on the Internet where he would hide in his room for 12-15 hours, much of that time spent of the Internet connecting to his base and family in the USA. His fear of crime was so great I could smell it coming off him when following him on his motorcycle. He abandoned me and changed his flight back to the "good old safe USA" near Chicago and departed Cape Town early. IMO he should have never left his "motorcycle adventurer womb," having spent most of his time in RSA and southern Africa shaking like a scared bunny when on the Internet.

Pic #1 was when he forgot the advice given by the rental company owner: "Don't be trying to make Facebook friends by talking with the locals." In the photo below he'd engaged in conversation with a local who said after several minutes, "I want your motorcycle." I then told him, "Put on your helmet and let's go, quit jawing and trying to make a new Facebook friend," which he did. I then looked skyward and asked, "Why hast Thou forsaken me?" 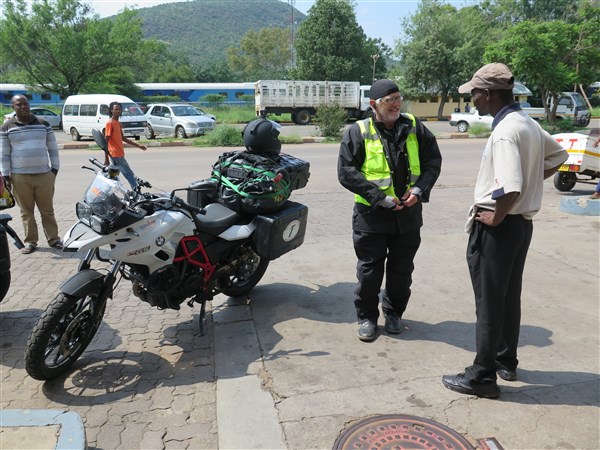 I rented this BMW GS from Africa Rentals & Tours - Adventure Bikes, www.gsafrica.com After considerable research of the numerous rental companies in RSA they scored the highest on my personal scale, with offices in Joburg and Cape Town. Pictured below, Petreaux and daughter Candi-Lee had paperwork and motorcycle in perfect order with a good safety net in place when I arrived. Husband Paul was a wealth of usable knowledge and advice which he shared freely, before we left Cape Town, like "Don't be trying to make Facebook friends by talking with the locals." 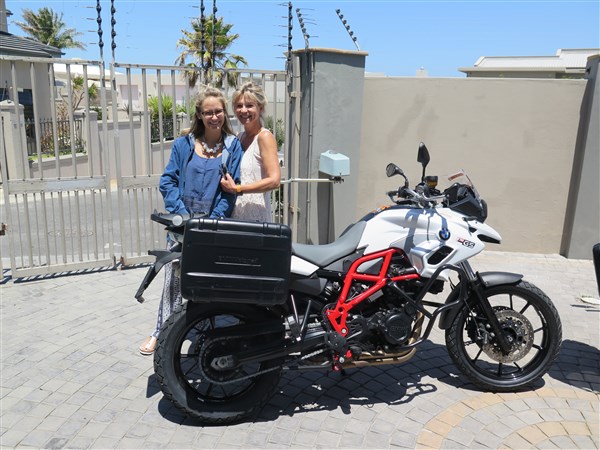 I mounted my own gear, as seen below 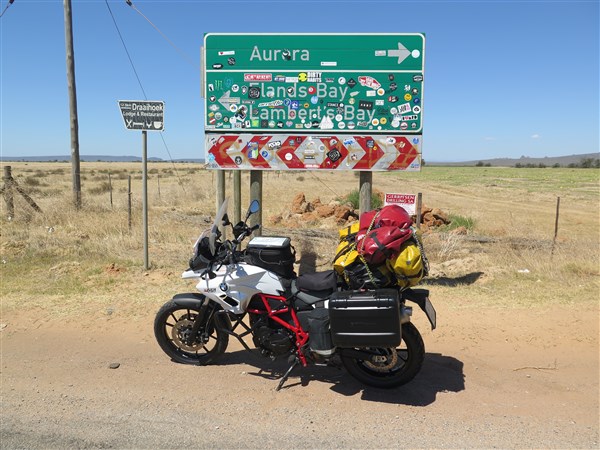 I look forward to another adventure in RSA, and will again rent from GS Africa (they also rent Harley-Davidsons). I'll again go solo, long ago having learned for me there was greater risk when traveling in the perceived safety bubble of a duo or group.