After a lot of hunting and very serious thought (especially about that gorgeous black 2000 model already in Chiang Mai) I've made my purchase, so here she is! 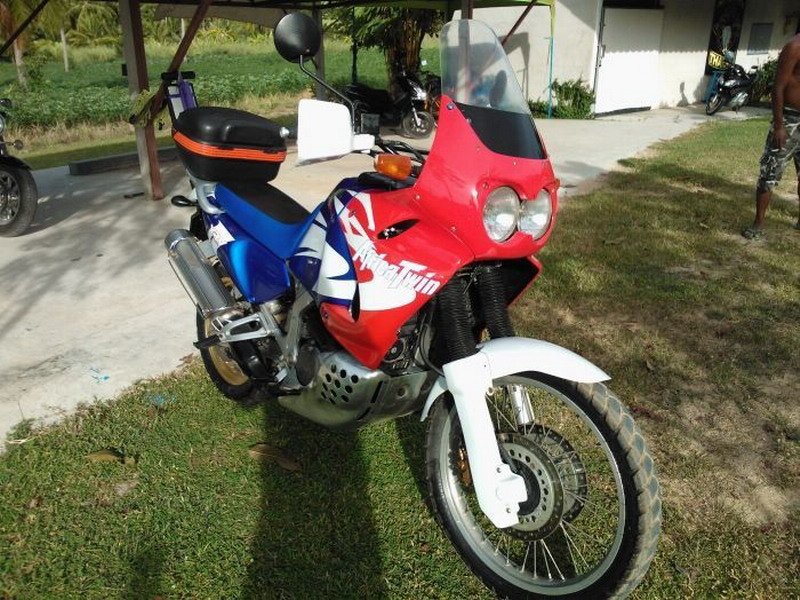 Also as you can see she has the later design body plastics which I believe were introduced in '93 (prior to that they had the "squared off" tail light assembly, remember?) so, as I have yet to find an accurate way of decoding an 11 digit VIN (17's are easy!) all I can say is she's either a late '93, or a '94 or '95 model. She's also been given a year 2000 design paint job which makes 'er a bit sexy, no? I have no idea of the why's and wherefore's about mis-matched rims..... the previous owner didn't either. Hopefully it wasn't anything serious: she's running good and true now.

) ie. the (stamped) number plate matches the book and the 11 digit VIN on the neck matches the one in the book, so there's a good start anyway!

Hopefully I'll be able to register her in Chiang Mai with minimal problems (previously Chonburi registered) and, after she's had a good once-over I'll be introducing her to all the wonderful twisty bits and rough roads the "Top End" has to throw at us! At least it'll save beating the crap out of the Electra Glide: she can earn a nice semi-retirement just doing smooth cruising from here on in!

And yes, I've changed me avatar to match!

I would say when it comes to dating bikes here, vins have a tendency to be less reliable due to being modded to fit available books.. Always go by the evidence of the parts moreso..

Congratulations, you've bought yourself a Bullet proof bike. Last year met a Japanese guy here in CM, on the exact same bike (exept no paint at all left). He was on his way home, after doing South America up and down, Africa up and down, and crossed all of Eurasia to Thailand. What would you call that as a movie, without a support team?...."Bloody long way round"

OlafJass said:
Congratulations, you've bought yourself a Bullet proof bike. Last year met a Japanese guy here in CM, on the exact same bike (exept no paint at all left). He was on his way home, after doing South America up and down, Africa up and down, and crossed all of Eurasia to Thailand. What would you call that as a movie, without a support team?...."Bloody long way round"
Click to expand...

Good choice Martin.
Mine was great and now the new owner is thoroughly enjoying it.
Happy rides!

Well, she's bought and paid for and now happily residing in 5 star air con comfort in a new-build Swedish resort in Laem Mae Phim, waiting for me to get my arse out of this fly-blown dump Cairo and get her up to where she belongs...... Chiang Mai!

Funny how I'm gettin' really frustrated at not being able to get me grubby lil mitts all over her...... it's usually the "sao sexy" I miss too much doing a 28 stretch (but I always have Nit and Noi with me!) but now all I think about is getting back and getting the Africa Twin sorted....... thanks to Phil and LR on another thread about a good fabrication shop in CM, I'll be getting a decent set of crash bars made up, and I hear the Army surplus store north side of the moat may have some military spec hard cases so I may need pannier racks making too.

Anyone in CM stock decent wrap around hand guards? Cheers.

Nut / Nat at piston shop sometimes has and can order decent hand guards, the higher value name brand ones.. I also know Keld ordered an expensive set right before he wrote off the Beemer, and had them surplus to requirements also.

Lek put a set of strong enough no name ones on my old wr for cheap.. Maybe 800 baht or so..

Glad you found what you were looking for Martin and nice to meet up with you at Downunder.
Kawasaki has some decent hand guards here in CM too as well as Nae`s MX shop next door to Riders Corner. I got a set from the "other" MX shop that i`m happy with for 800 baht.

KTMphil said:
I've got a new boxed set of Moose hand guards you can look at if you wish when you're back
Click to expand...

Sounds good Phil, what colour and what you asking for them? Similar to any of these models?

MartinThai said:
Sounds good Phil, what colour and what you asking for them? Similar to any of these models?
Click to expand...

Its just the quality alloy guards, i presumed you wanted to use your existing plastic.

Spotted in the Chiang Mai traffic this morning....

You got the good side

Took the bike round to the Thai guy on Montri road (off Charoen Muang, opposite the Bridgestone place) and he's got the whole fairing, gonna fix the damaged left lower and all the old hairpin cracks on the other parts, cut a new windshield etc, be about 3 weeks till finished. Then I'll be looking for a good spray/graphics person to bring Big Daddy up nice and shiny again!

Cheers for the intro to Joe Phil, shame he was so busy...... with me working offshore for 28 days it's ideal to give someone the bike for a 4 week period to get all the work done.
You must log in or register to reply here.
Share:
Facebook Twitter Reddit Pinterest Tumblr WhatsApp Email Link
Top Bottom