We decided to leave early and try to ride from Chiang Mai, Thailand to Luang Prabang, laos in 1 day.
It's about 470km to the Laos border at Nan and then a 150km dirt ride through the mountains to Luang Prabang, Laos. You have to add on about an hour and a half to get through the border crossing formalities

This was the dirt route from the Thai Nan - Laos Muan Nguen border to Luang Prabang, Laos

We knew that Auke had done it in 12 hours in his pick up (& dave had done it a few years back by road on his Ducati), but with the smaller engine bikes only really liking a cruising speed of 100km an hour it would be interesting to see if it could be done.

Small problem with Alex s paperwork at the border - the Thai side had transposed the registration plate number and the Laos side wouldnt accept it, so Alex had to go back over to the Thai border and get it corrected. Once this was done, off east into Laos to meet up with Steve in Hongsa.

About 1km east of the Laos muan Nguen checkpoint there is a PTT fuel station that will take Thai Baht, currently they are using 250 kip as the exchange rate , it should really be something like 265 kip (8th May, 2011).

Time was still looking good, we had the option of sleeping in Hongsa but decided to give Luang Prabang a shot. It s a fantastic ride over the mountains to Luang Prabang, 150km of fantastic views and 6 water crossings, here steve going through one of them at dusk.

We had to ride the last hour on dirt roads towards Luang Prabang in the dark, it was a relief to get to the ferry across the Mekong river. here we ve just got on the ferry and the city of lpq looked fantastic reflecting in the Mekong.

One of the many beautiful Wat's in LPQ at night

The Blue Lagoon in LPQ looks like a nice spot, will try this out next time i'm there

The Philalak GH in LPQ only had 2 rooms left, so I stayed at the GH next door which wasn't great value for 100k kip

Con getting a morning Baguette in LPQ

The Oriental hotel in LPQ which is on the main street by the night market is an excellent choice if you want luxury hotel, rooms are about USD$ 65 a night

Looked like we may have some rain coming from the SW , you can see the Mekong river to the right

We then had pretty heavy showers coming through, these kind locals lent me the shelter in front of their house

Alex, Steve, Con & Don found a bigger shelter. Locals all very interested in the bikes, not a well trodden route.

Further SW down the trail, we found this piece of land for sale on the Mekong river

Don (midnight mapper) taking some shots across the Mekong

We then stumbled on this cool old Russian truck

Towards the southern end of the trail, we bumped into this guy with an AK 47, we asked him where he got it, he told us there were loads floating around from the Vietnam war.

The rain showers were now becoming more frequent and the rainwater wasnt disappearing as it was before, you can see the moisture lifting in the distance from a shower just passed

A dryer spot with Con coming passed in the mirror

The rain was now pretty constant and the mud silt covering was snowballing, sticking on the tires. Because it became so slippy we couldn't build up speed to create enough centrifugal force for sticky mud to fly off.

I was stuck, steve was stuck, Don & Alex pushed ahead as from Don's GPS map he knew their was a villiage ahead, hoping to find maybe an iron buffalo that could get us out. they sent out some villagers to try find us but they never did. Don and Alex rode back about 11pm as the rain was slowing and in the pitch black after cleaning the bikes we managed to get to the next settlement.

Steve had flattened his battery with the constant stalling with the bike weighing twice as much with the accumulated mud, to bump start it he had to get his rear tire cleaned to get some grip
all being done in pitch black, now about 11pm

The hut we slept in is behind the white XR250

Con had gone ahead earlier and managed to get passed the 5km area of sticky mud before the rain had settled in, it seemed there was a critical time to pass this area, he somehow managed to find his way all the way back to Luang Prabang by following the power lines.

Midnight mapper awakening in the settlement, now wishing he hadn't sampled their "laos khow" (rice moonshine) the night before!

The villagers were extremely friendly, made us very comfortable under the circumstances (we thought it was a day trail ride, so all of our hammocks and camping gear was left in LPQ). The next morning the fed us sticky rice and canned fish with local hot tea.

we got all the bikes in there 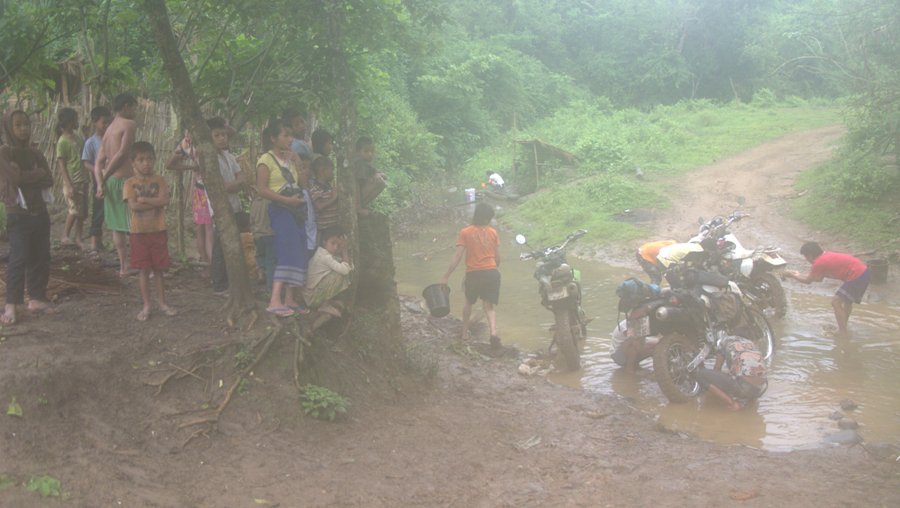 It was a soupy mud ride back to LPQ, once back and cleaned up we went for dinner at a sushi restaurant in LPQ where the menu was the length of the table. (here Don, Uh & Quinn (Jim's wife))

Con had been freaked out about driving on the right , nearly killing himself and booked a boat back upriver to Pakbeng for him and his bike to go back to Thailand, now there were only 4 of us left.

Con and a bamboo bridge 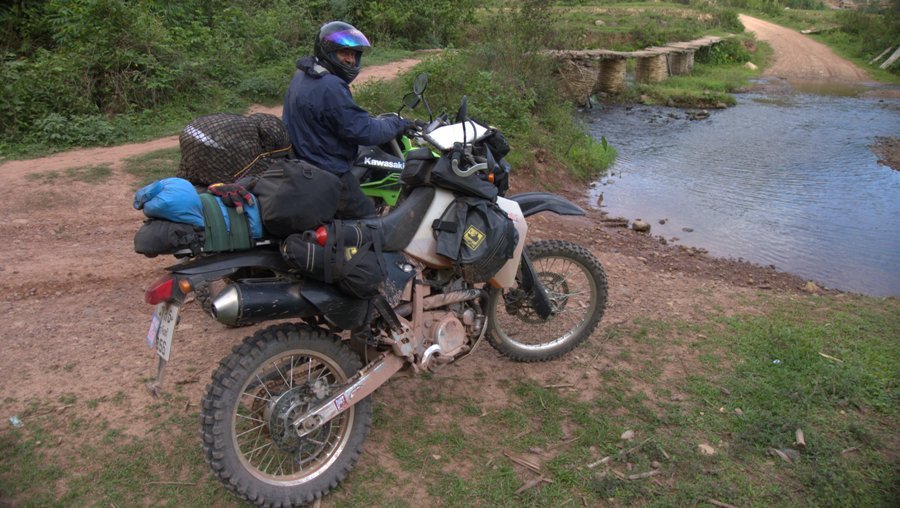 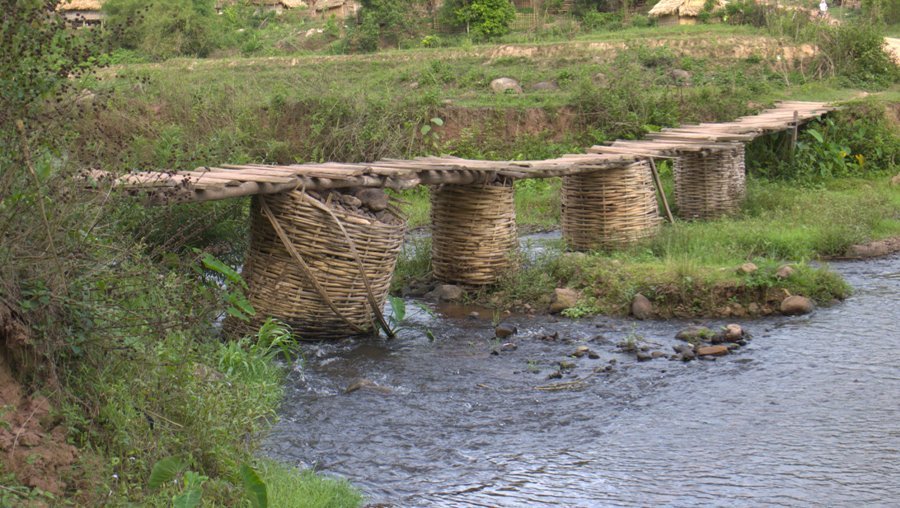 The next day we left LPQ and headed east on trails. Don knew of a fabulous trail that went north of the trail up a very steep rocky track to a ridge line. It was really steep everyone fell except Alex.

I stopped at a critical point and fell

It started to rain and after the previous days experiences we decided to show the mountain some respect and headed back down to the main trail and head eastwards.

The track down to the main trail had a beautiful suspension bridge at the intersection, this is about 40km east of lpq 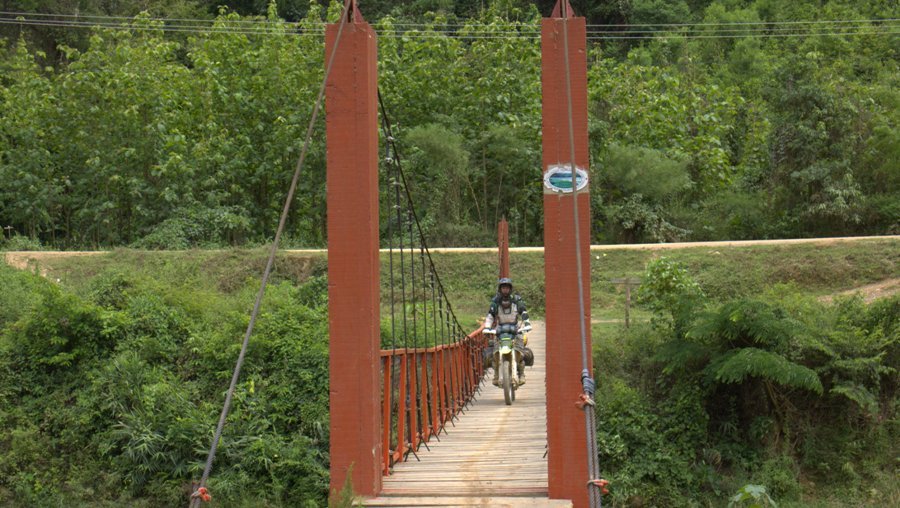 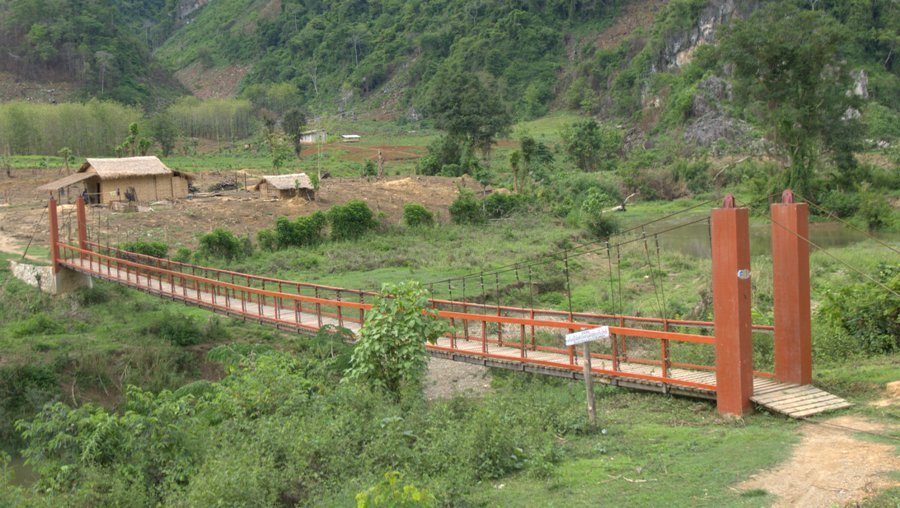 There were many villages on the trail and plenty of fuel can fuel stops along the way. Late afternoon we arrived at Phonxay where they have a government GH for 40,000 kip a night.

With a couple of hours of daylight left we went off exploring south of the town Don's gps map showed that there were some interesting trails in the mountains. The small bridge wasnt an issue the bamboo bridges are amazingly strong.

Don at a hill tribe village we visited south of Phanxay

The views in the mountains south of Phanxay were magical, you can just make out a village in the valley

The electricity shuts down in Phonxay at 4pm so be careful with your phone (shut it off at night). Food options were limited here, we managed to find some sticky rice and chicken.

MORE TO COME WHEN I GET A BETTER INTERNET CONNECTION

Fantastic ride. I really need to make it back to Laos to explore the north. Good to see your DRZ with her dirt wheels on!
P

Excellent report & pics and a whole heap of respect to the five of you for what looked like a very tough time.

Maybe a slideshow at RC when you are back Phil?

It didnt get any better Jeff! im in laos working on part 2 now. Con was smart to pull the rip cord (joking).

Pikey said:
Excellent report & pics and a whole heap of respect to the five of you for what looked like a very tough time.

Maybe a slideshow at RC when you are back Phil?

Nice trip. What a great country for riding. Did Jim @ RA help plan this?

No, we planned it all ourselves using Don's new Laos GPS map


ThePoMoBro said:
Nice trip. What a great country for riding. Did Jim @ RA help plan this?
Click to expand...

Am amazed you rode with Don. Everybody I know would be afraid to ride a " Don track",
much less ride with the crazy man himself !!

: Loved the muddy tire pictures. Same thing happened to me in Borneo, the mud was so sticky it would jam the tire on my 1150 GS. Spent the night in the jungle wrapped up in a bike cover with pouring rain, looking like a burrito by the side of the road.... While riding just before I got stuck, it was interesting to me that the more it rained , the less the mud would jam the tires as the rain reduced the stickiness. Look forward to the Sam Nua section.

SEE PART 2 OF OUR TRAIL RIDING IN NE LAOS MAYHEM

SEE PART 2 OF OUR TRAIL RIDING IN NE LAOS MAYHEM

Rock Hill, the gateway to one of the most dramatic riding trails in Laos!
This is the steepest section, Wet clay and slippery limestone rocks make this a tricky climb!
Whith 3 of the 4 bikes laying on the trail, (including mine) and rain approaching, the wise decision to return to the main road.

I think this was the steepest toughest trail ive ever attempted

Wow what a great looking adventure you all had I'm keen to get in on trips like this. Unfortunately I'm a bit of a novice when it comes to exploring other countries on a dirt bike. Hope I can learn the tricks of the trade from you guys at some point.

That is a lovely bike john.

Drew sent me a photo of one of the river crossing between on the dirt road between Hongsa and Luang Prabang. It looks like a bridge has gone in there in the last week, it wasn't there 2 weeks ago when we went across: 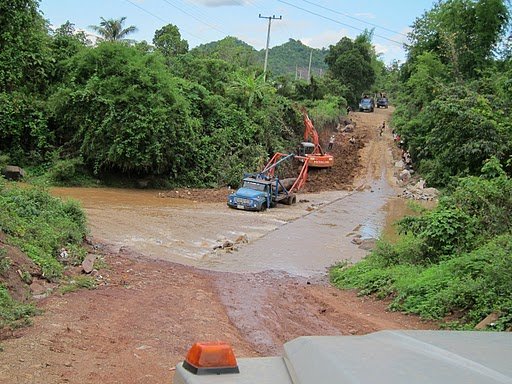 Looks like he has a sweet ride for Laos (and for in Bangkok), one of my favorite jeeps of all time. 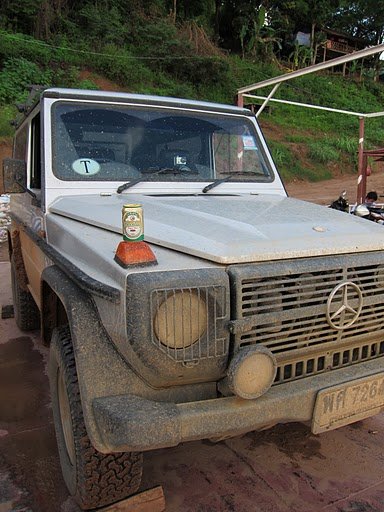 KTMphil said:
Looks like he has a sweet ride for Laos (and for in Bangkok), one of my favorite jeeps of all time.
Click to expand...

It is a very rare Beer Lao Edition

nope, it is a petrol. the next one will be diesel.

Been getting asked how many KM's we did when we rode in 1 day from Chiang Mai, Thailand to Luang Prabang, Laos (at the beginning of this thread / 1st day). The answer is 545km

Then from the Muan Nguen. Laos border to Luang Prabang via the 4B unmade road - 165km = 545km total.