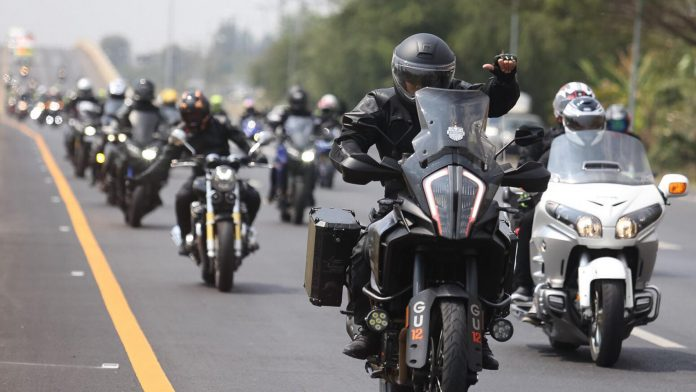 The Ministry of Transport on Tuesday said it plans to ban riders of “big” motorbikes from weaving between cars, as part of a broader suite of efforts to reduce casualties on the road.

The ban on lane splitting would affect individuals riding high-powered motorcycles (defined by an engine size of 300 cc or more), known as “big bikes” in Thailand, deputy permanent secretary for transport Chirute Visalachitra said on Tuesday.

“The ministry is planning to intensify road safety measures, especially with regards to motorcyclists, as 74 percent of accidents are related to motorcycles,” Chirute said.

Under the proposed regulations, big bike riders will be treated like regular car drivers: they will have to follow the vehicle in front of them, except when overtaking. They will also have to wait behind other vehicles before traffic lights or in congestion, and limit their speed to 80 kmph in urban areas.


Chirute added that big bike riders will also be required to take special tests when applying for “big bike” driver’s licenses. Ride simulators will be introduced to evaluate handling skills and safety mindsets in critical situations.

Another aspect of the proposals will target foreigners by forcing them to show a driver’s licence when renting motorcycles, which previous regulations only required them to present a passport.

Although the new regulations have yet to pass cabinet approval, Chirute said some of the measures could be effective by the end of the year.

Thailand was ranked by the World Health Organization as the ninth deadliest country for road safety in 2018. According to statistics from the national police, 8,361 people, 141 of which were foreigners, died from a total of 103,515 road accidents reported last year.