Nepal – The quintessential adventure riding destination……. or is it?

I decided to join 4 people from Australia and do a 5-week motorbike trip in Nepal. We chose to rent bikes and plan our own route(s) around local conditions and time available taking in a few specific places we wanted to see, no group tours and no guides.

March 25 to 29
Arrived in Kathmandu with 4 days to kill while waiting for my compatriots to arrive. It was quite a culture shock, Kathmandu is dirty, dusty, polluted, hectic and expensive for what it is. I couldn’t get my bike early as it wasn’t available, so I just walked to get around Kathmandu. The 4 days passed slowly as I had a serious case of food poisoning on the first day and chronic diarrhea for a weak after. March 28 and my friends finally arrived, we organized all our gear, picked up the bikes, loaded them up and we were on our way. The ride out of Kathmandu was horrific, klm’s of traffic jams, trucks, buses, mud, dust, roadworks, cattle, pollution, garbage etc. However, after a few hours we were finally into the foothills of the mountains and leaving Kathmandu behind. 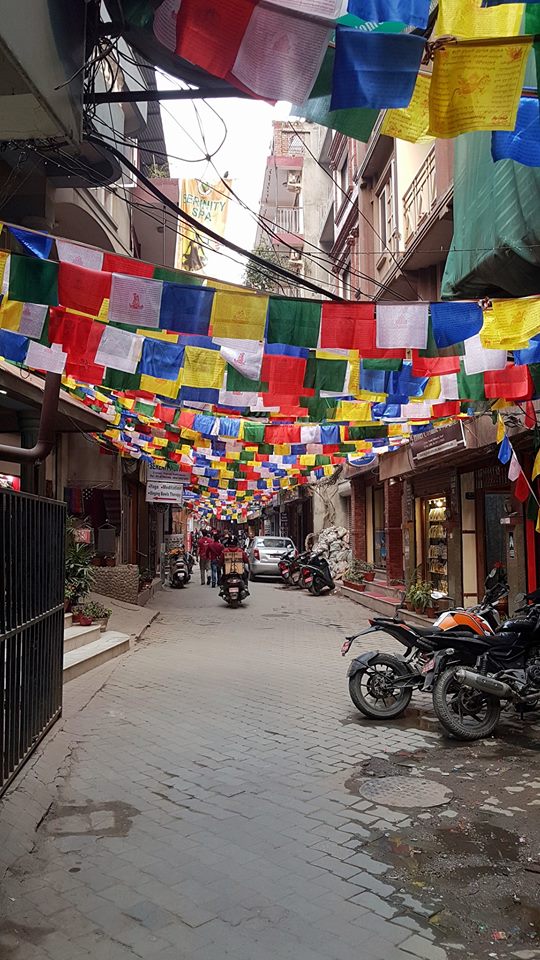 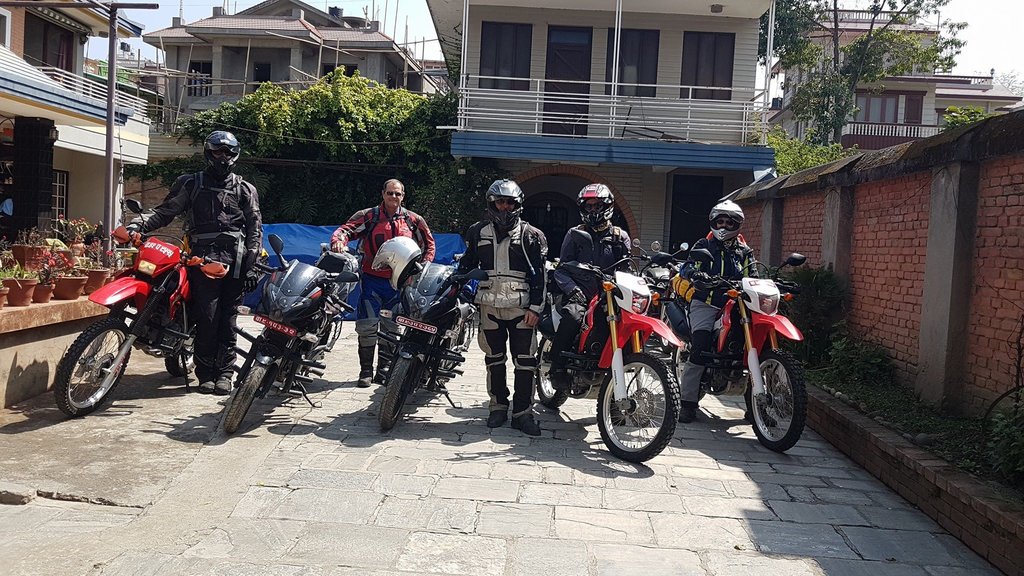 March 31 to April 6
The first week was tough going with food poisoning, diarrhea and a burned-out clutch on my bike on the first day of riding. We did manage to find a beautiful village (Old Bandipur) in the foothills of the Annapurna Range to spend 2 nights waiting for the Baja bike shop to open in Pokhara. After Bandipur we took the back roads trying to stay off the main roads to get to Pokhara, but we were hit with some massive storms every afternoon which made for difficult and sometimes dangerous riding with flash floods, rock falls and land slips. We eventually made it to Pokhara and had the clutch replaced on my bike, we also picked up some basic supplies and enjoyed a few days getting ourselves and our bikes in order before the next leg of the trip. A beautiful ridge walk and look out over Bandipur 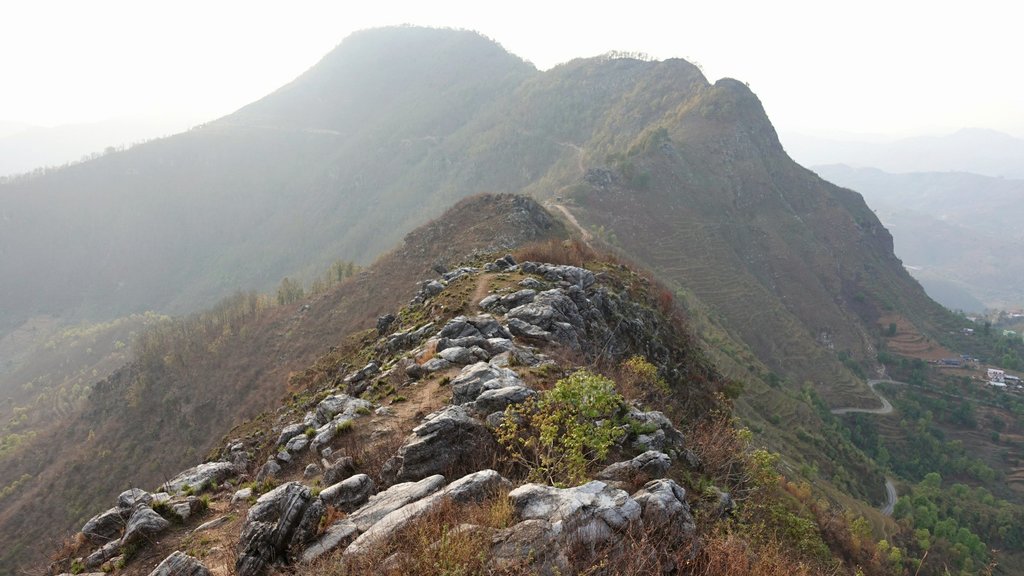 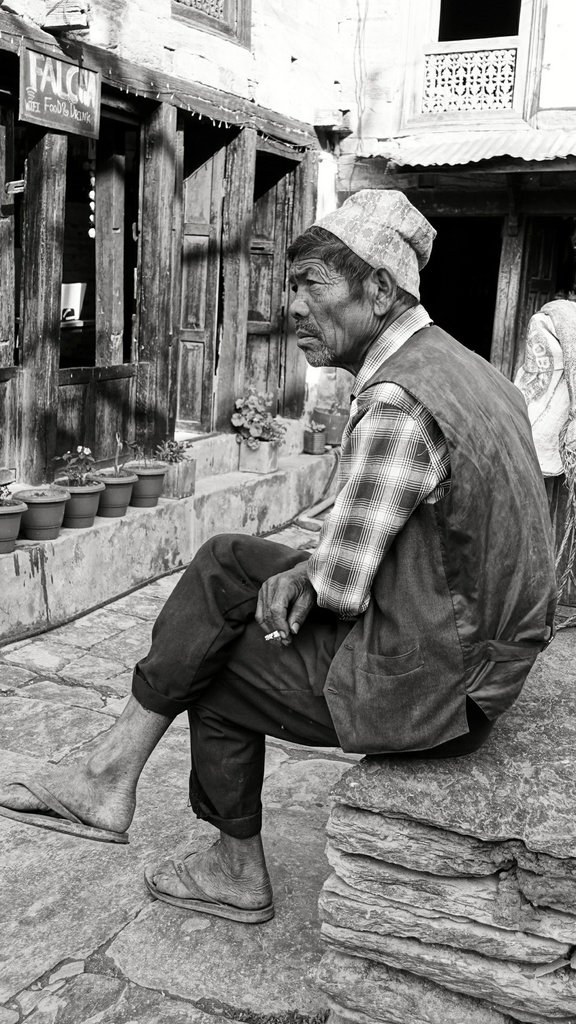 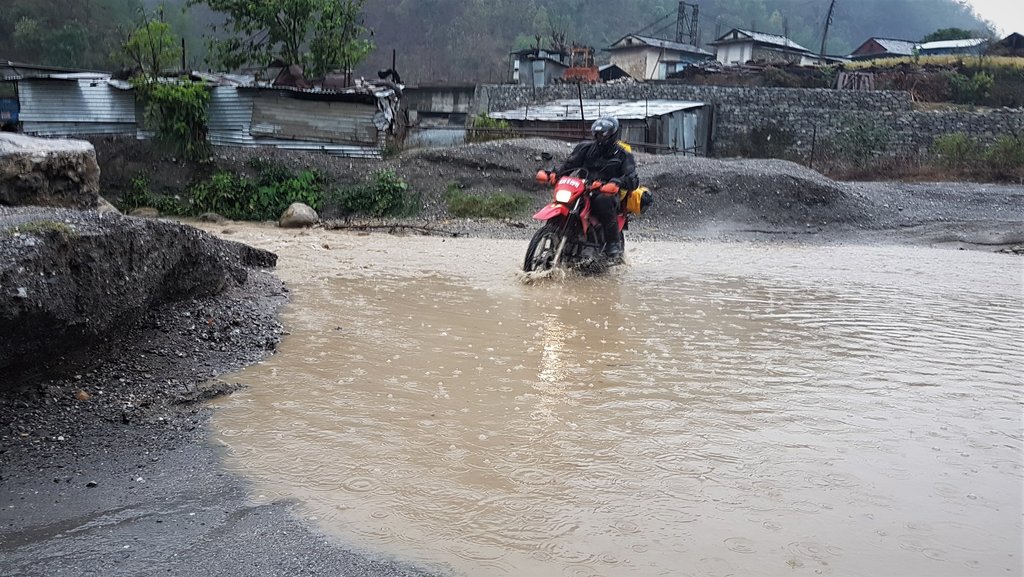 New clutch, I can finally ride up a hill without rev-limiting lol April 6 to 11
While in Pokhara we were pulled over at a police check point and although we had all the paperwork we were given from the rental company the police threatened to impound our bikes and delayed us for a considerable amount of time, most likely in an attempt to get a bribe which I refused to hand over. They eventually relented and sent us on our way, much to our bemusement. The plan after leaving Pokhara was to take the back roads across to Jhula via Kushma and Burtibang about 4 days of riding but again we were hit with flash floods, heavy afternoon storms and the roads were in terrible condition. Most main highways in Nepal are unsealed and difficult on a good day so the back roads were becoming a grueling test for us and the bikes. After a few days of pushing hard, covering very little distance and not seeing any of the mountains due to pollution and low cloud we finally decided to head south and get on to a reasonable road and head to Lumbini and Bardia National Park in the hope the weather will eventually clear and we could head back in to the mountains. Lumbini is the birth place of Buddha but has sadly become another tourist trap, all the same it was an interesting place to tick of our list of places to go and see. At Bardia National Park we took a safari tour, we didn’t see any tigers (even though 57 of them are supposed to live there) or elephants but we did see 2 rhinoceros and quite a few different species of deer. It was really another lackluster experience that we would become very familiar with as our trip went on. 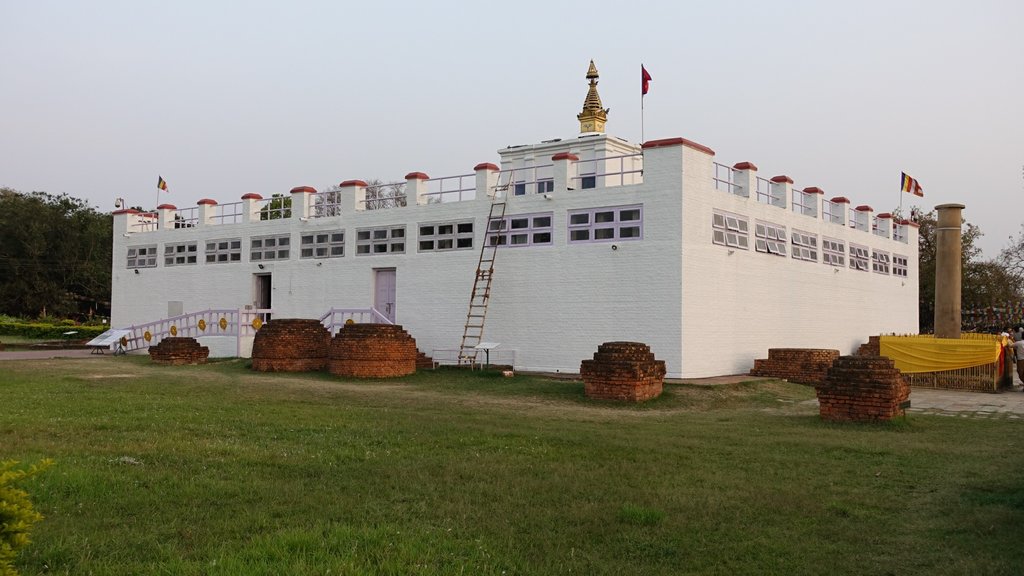 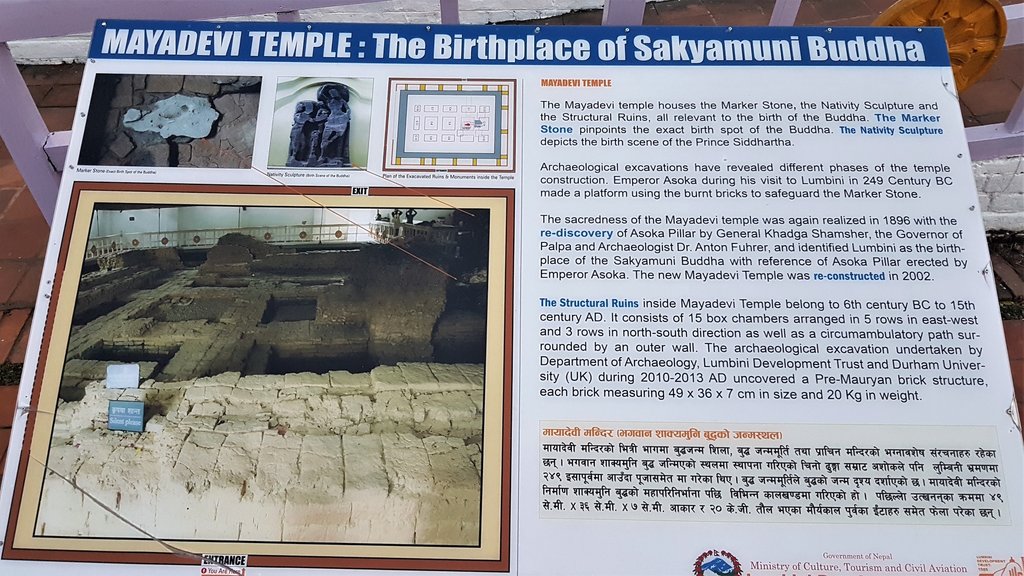 April 11 to 17
The next leg from Bardia NP to Rara Lake was a difficult 3 days ride, reaching heights of 3,300 mtrs and mostly on unsealed rough roads that in some parts were washed out with the recent storms plus a few rock falls and land slips. Although the riding was difficult, and we encountered more rain, the scenery was impressive as we followed a deep gorge cut by the Karnali river. Arriving near Rara Lake were told that there was no access and no accommodation available as the Prime minister of Nepal was due to visit in the next day or 2 and most of the area is in secure lock down. We managed to find a hotel across from an airstrip where we stayed for 2 nights but there was no vehicle access to the hotel/village because of the runway so it was a long walk with a lot of gear and expensive parking to leave our bikes outside the area, it seems they always found a way to make things difficult and expensive. The next day we headed to another lake access point, but they wanted $12US to park our bikes in a paddock, $30US park entry fee (despite already paying $46US for our trekking permits) and it was a 6 klm walk to the lake (even though there was vehicle access). I can’t walk 6 klm’s because of my disabilities so I asked how much to rent the ponies they had and that was going to cost another $30US! Fuck that I’m not paying about $110US to see a lake in the middle of nowhere so I turned around and went back to the hotel while my friends payed through the nose and went to the lake, which they said really wasn’t worth the money. Besides having to get use to lackluster experiences we also had to get use to being charged excessive fees. It was 5 days ride to get back to Pokhara from Rara where we based ourselves for a few days rest, new chain and sprockets for my bike, get supplies and prepare for the next leg from Pokhara to Muktinath. 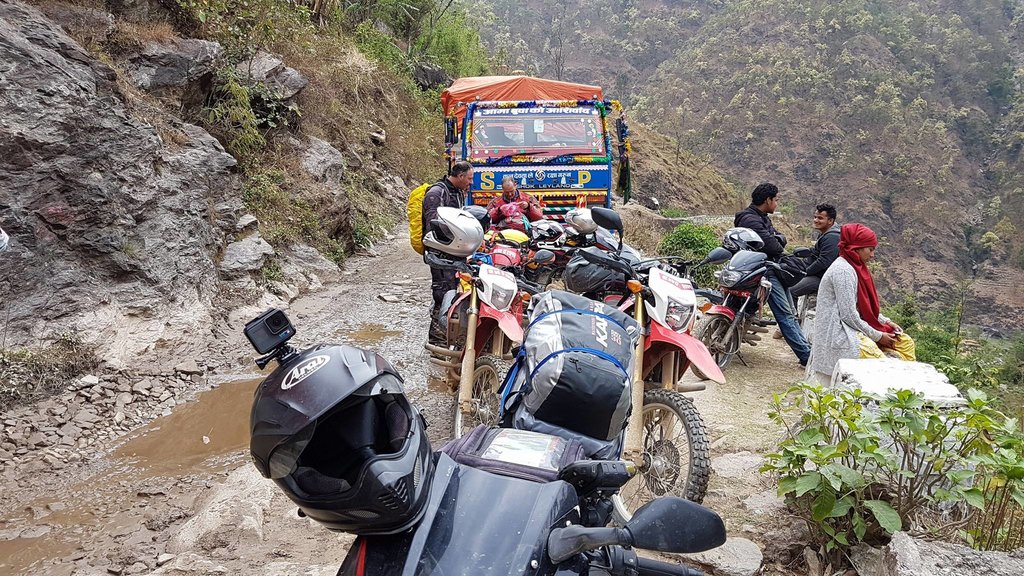 Morning mist from our hotel belcony Quite a view over the airstrip and mountains from our hotel How they carve a living from these mountains is beyond me 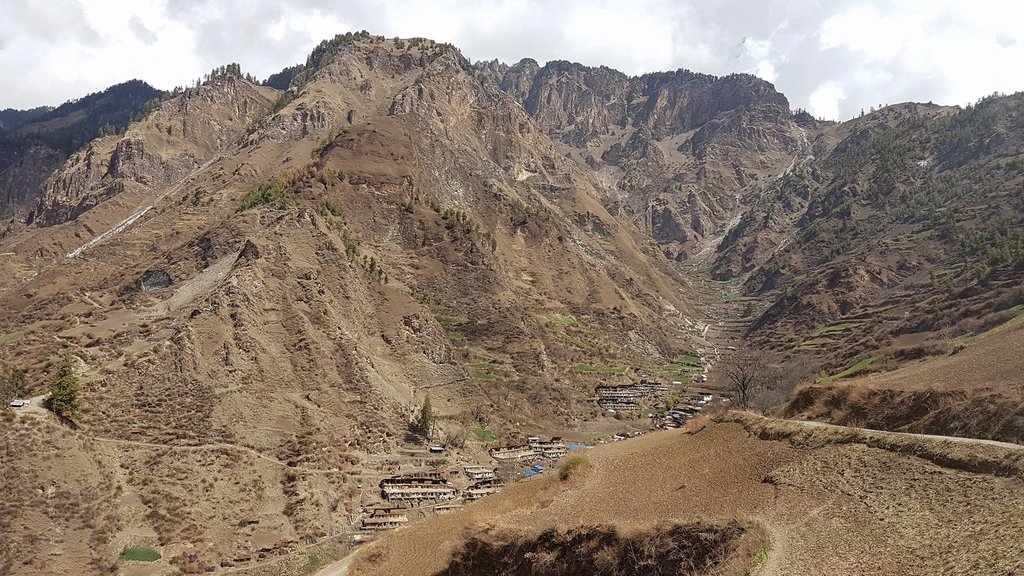 Nanna hamming it up for the camera 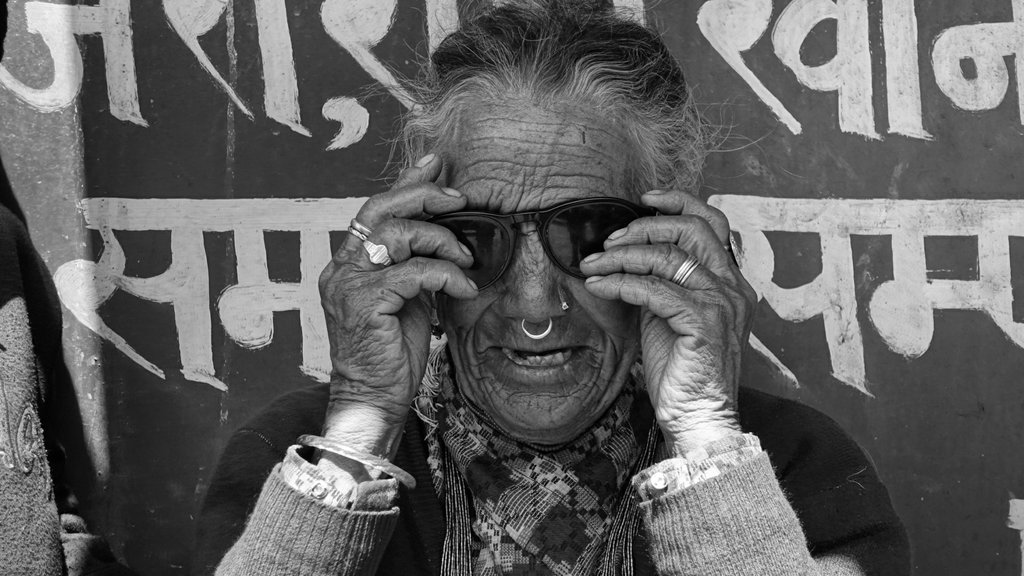 Hard to beat the views We met this gentleman in a remote village in the mountains, he's 72 years old and still going strong.
He managed to scam me out 60 rupees for 6 bananas but before we left he gave me another 6 for free A big turn out in a remote village to inspect the foreigners and their bikes. 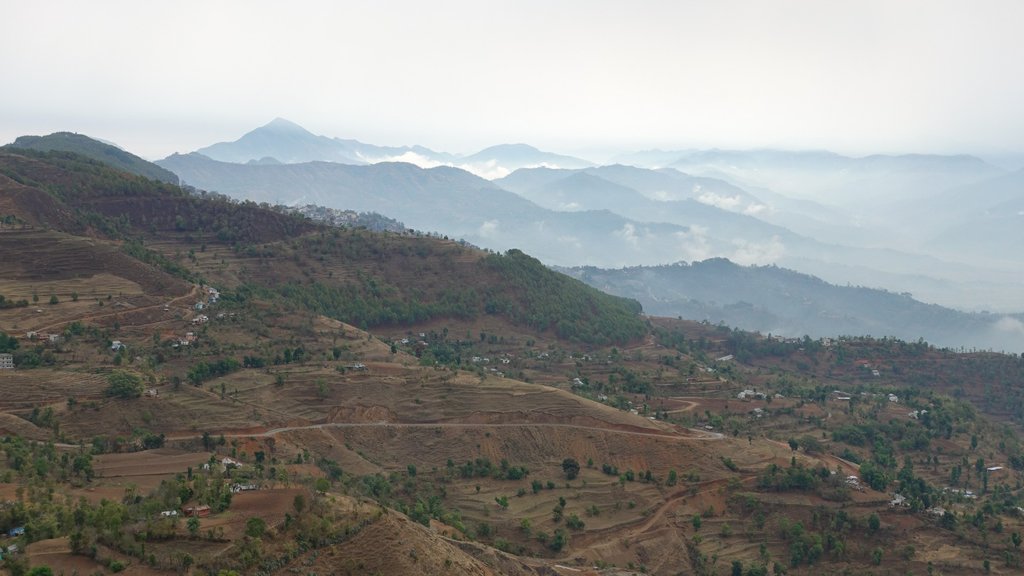