Nepal – The quintessential adventure riding destination……. or is it?

April 18 – 24
The ride from Pokhara to Muktinath was stunning in places with the Annapurna and Dhauligiri Ranges on each side of the gorge. After 3 days we finally made it to Kagbenni at an altitude of 2,800m, surrounded by 5 and 6,000m peaks. We found a good hotel with wifi, hot water and reasonable food and the views were simply amazing particularly watching the sunset over the high peaks. The next day was a day wandering around the Muktinath at 3,800m, the desolate moonscape like hills and valleys are due to extreme cold and low snow/rain fall caused by the 8,000+m Annapurna and Dhauligiri Ranges on each side catching all the snow and rain first. From Muktinath we took a little-known track that traversed old glacial moraines and across wind swept high plains deserts finally hand railing down the Kali Gandaki river to our hotel at Kagbenni. The next morning we left early to get to Lake Begnas south of Pokhara. 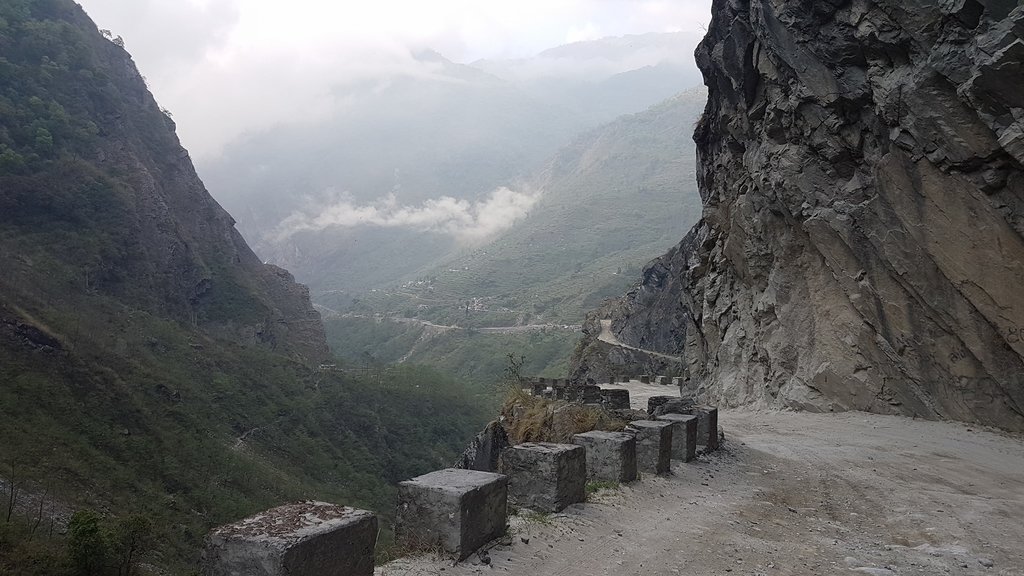 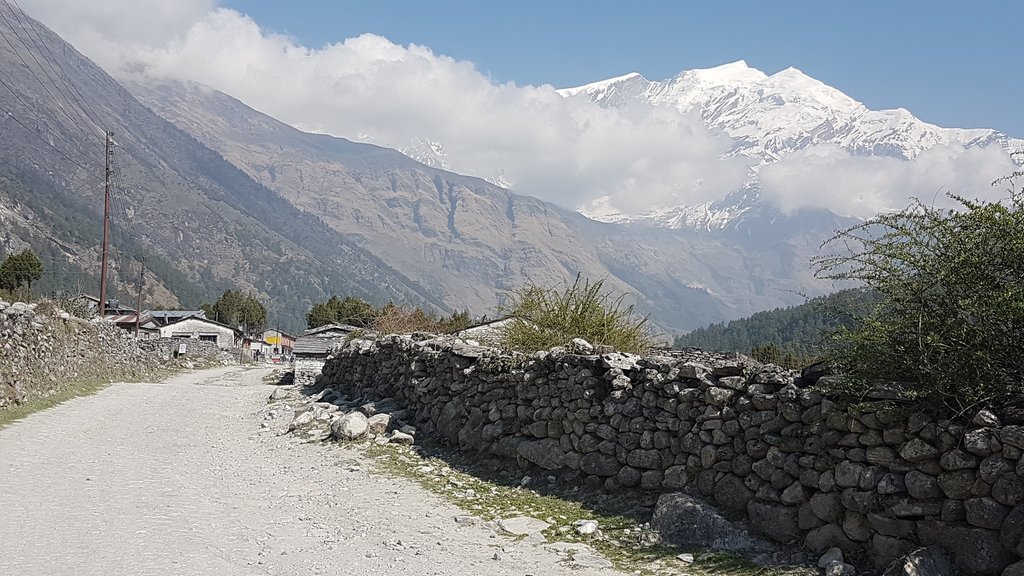 Incredible sunset over the big peaks 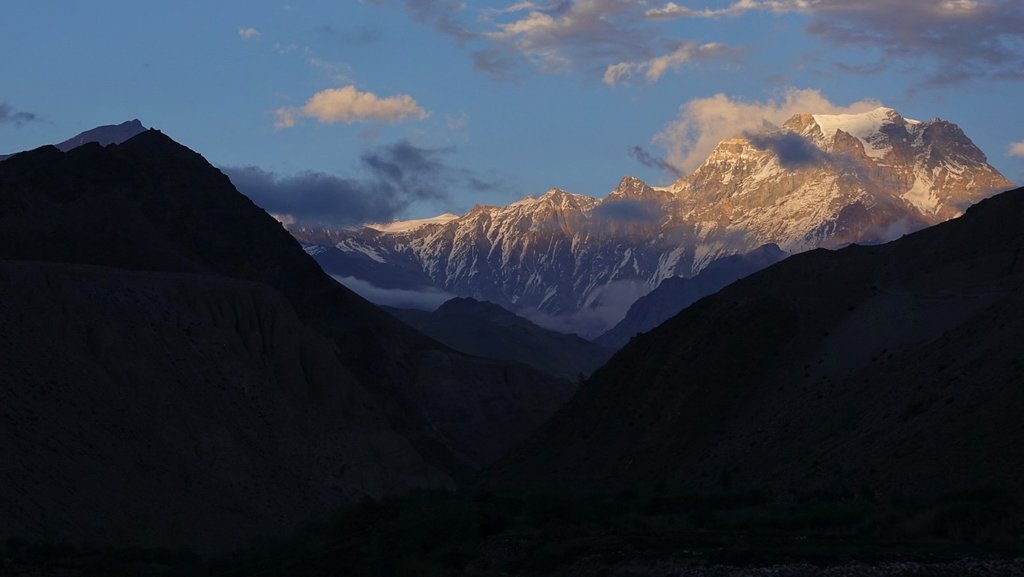 And amazing sunrise on the Annapurna Range 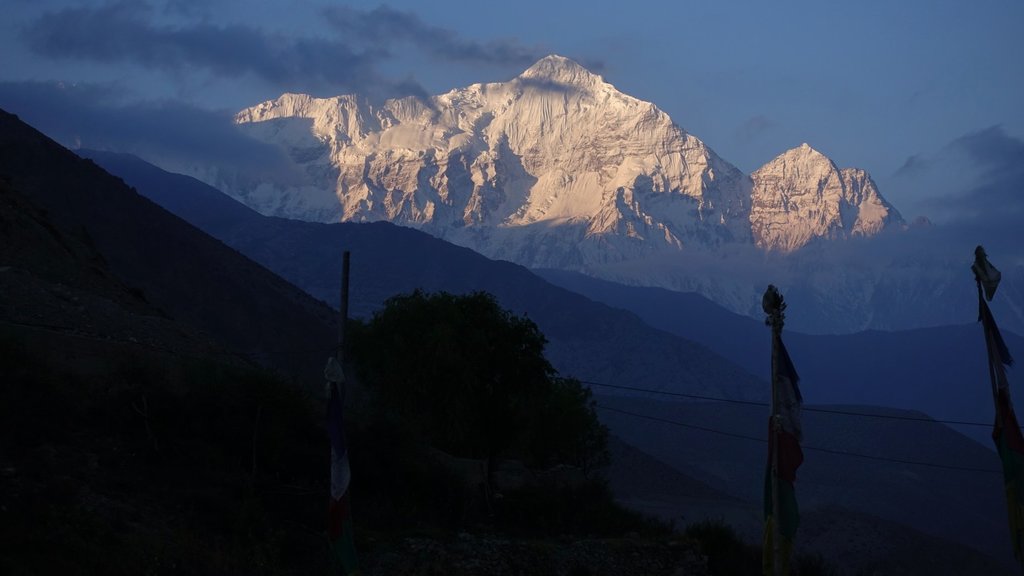 The surreal village of Muktinath 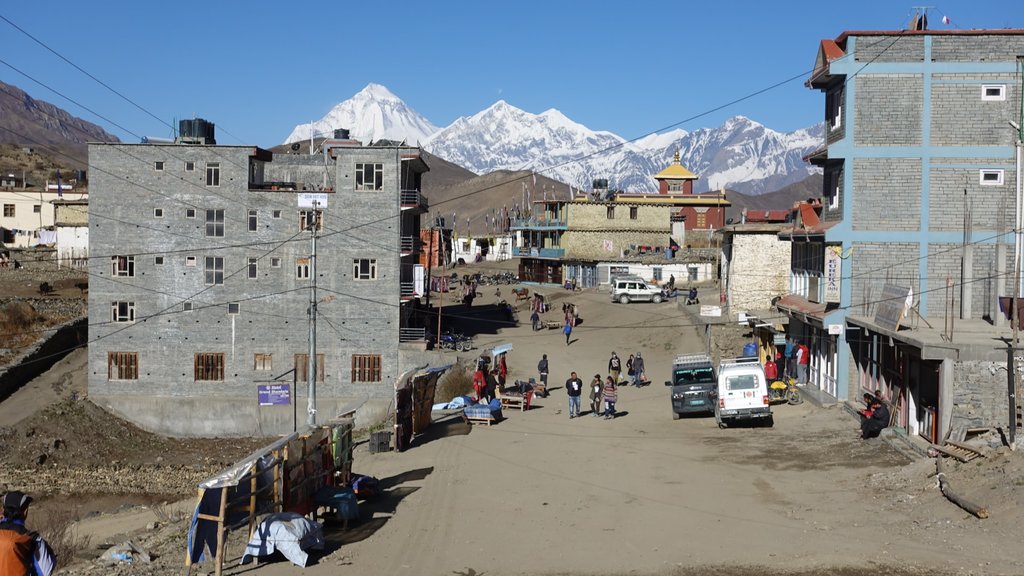 A moment to savour The stark landscape of the lower mustang 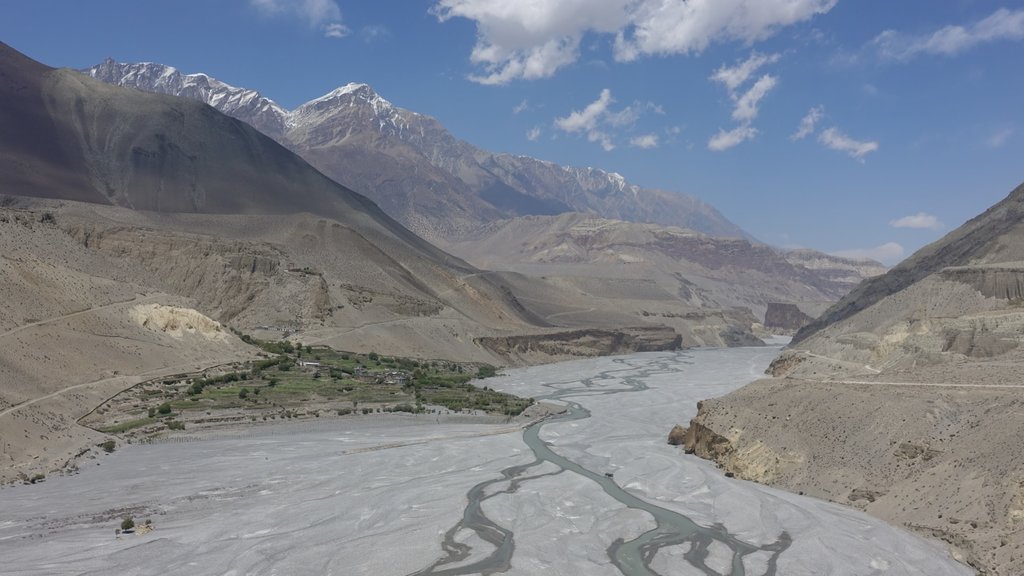 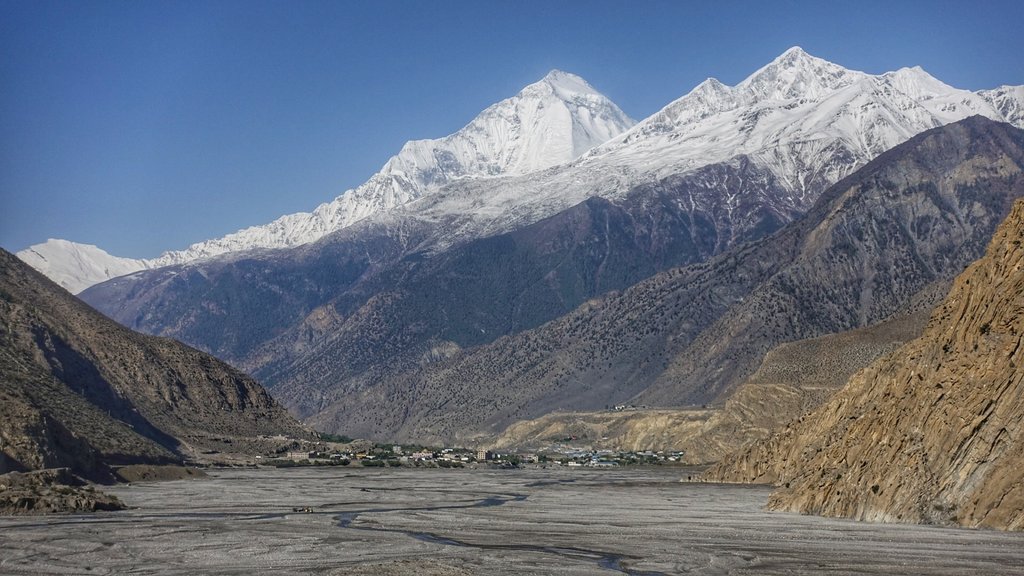 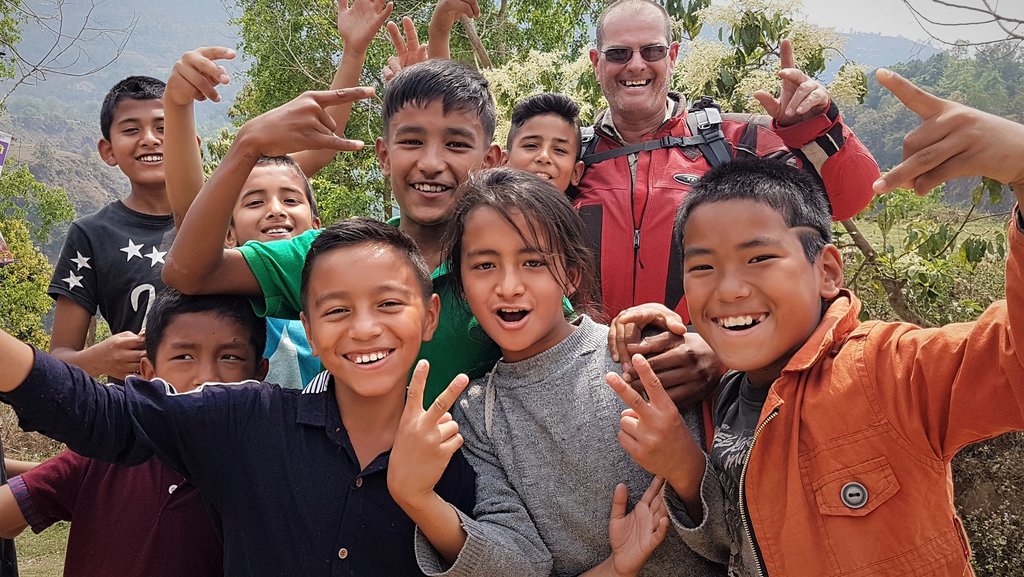 April 25 – 27
From our hotel at Begnas Lake, over breakfast, we watched the morning sun light up the snowcapped 7,000m peaks, albeit through the haze at a distance. It wasn’t long after this and we were making our way to Gorkha on some nice roads with some great corners through the foothills of the Annapurna Range. Gorkha is the cradle of modern Nepal with a history of some 800 years where there is an ancient palace with bizarre rituals that are still practiced today. Such as slaughtering goats and dragging the bleeding carcasses all over the hundreds of palace steps as a purification and a blessing before butchering and selling the meat. Monkey gods and monkeys are watching you as you wonder through this medieval, macarb and mildly disturbing place that harks back to a more sinister time. However, some of the architecture, wood carvings and stone work are simply stunning which made it all quite a unique experience. Sunrise over Fishtail Mountain and the Annapurna Range 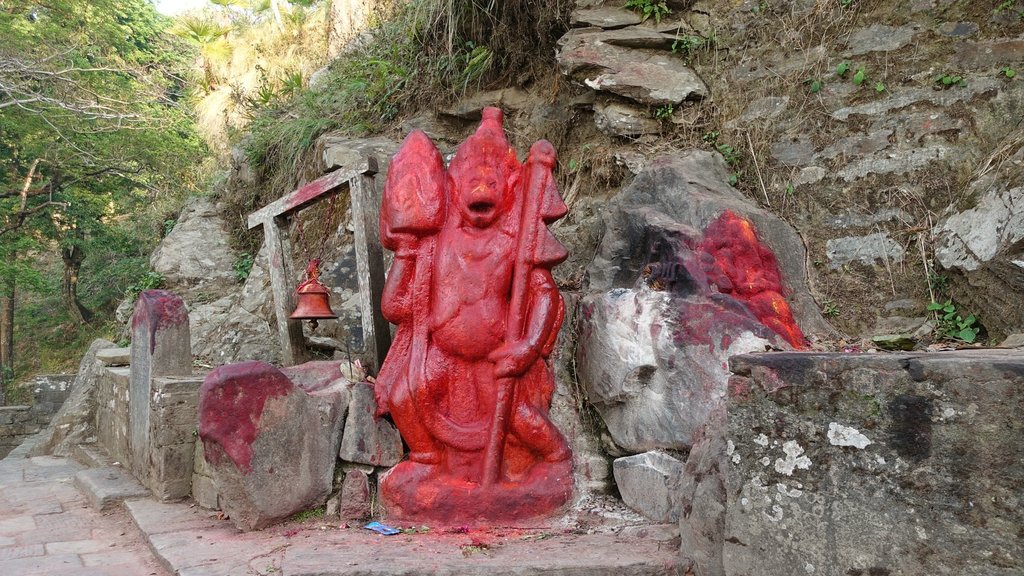 April 27 – 28
We then headed up the Pasang Lhamu Hwy towards the Nepal/Tibet (China) border where another military controlled National Park check point wanted another $36US to ride the remaining 80 klm’s to the border. No amount of negotiating made any difference, they wanted their money and were forthright about it. I decided I had spent enough so I decided to turn around and head back while my friends decided to pay the fee. There had been a few times in the past weeks where the social scene was fragmenting and deteriorating so it was probably time to head off alone anyway. So we parted ways and I spent 2 days heading up to another Nepal/Tibet border. After passing through 2 police and 1 military check point without being stopped things became weird, the next 30 klm's there were no vehicles, no people and deserted villages. Then it became obvious from the devastation that the whole area has been abandoned since the major earthquakes 3 years ago. I got as far as the Tibet border where the road had a high gate stopping any further access. Probably a good thing as the Chinese military had already taken a keen interest in my movements. The abandoned Kodari village, Tibet (China) is on the right side of the river 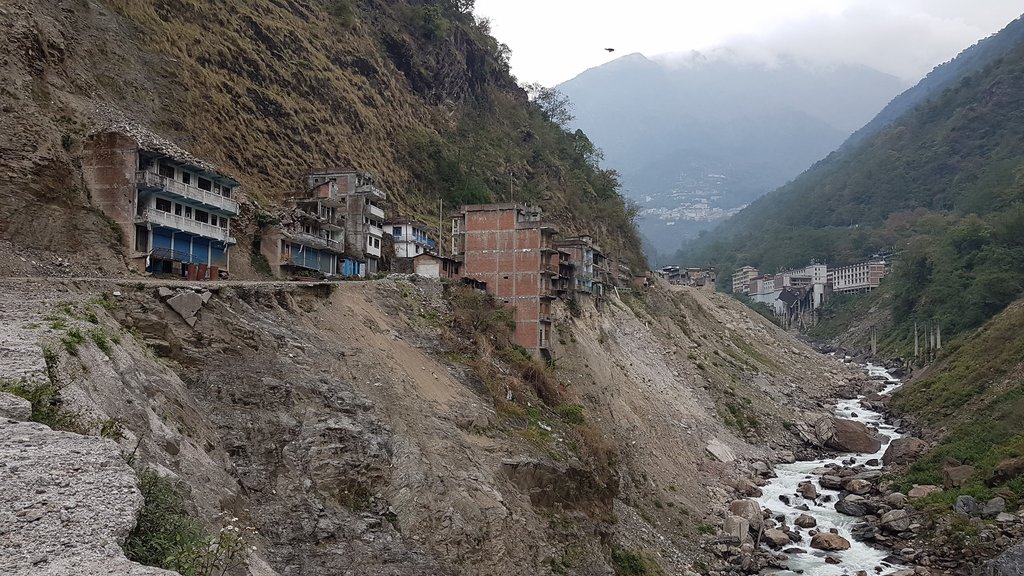 April 29 – May 2
After Kodari I ended up at Bhaktapur a beautiful 400-year-old village that provided quite a few photo opportunities along with a decent hotel, reasonable food. It was just a short ride from Bhaktapur to Kathmandu where I returned the bike, indulged in a few beers, half reasonable food and cleaned and packed my gear for the return flight. 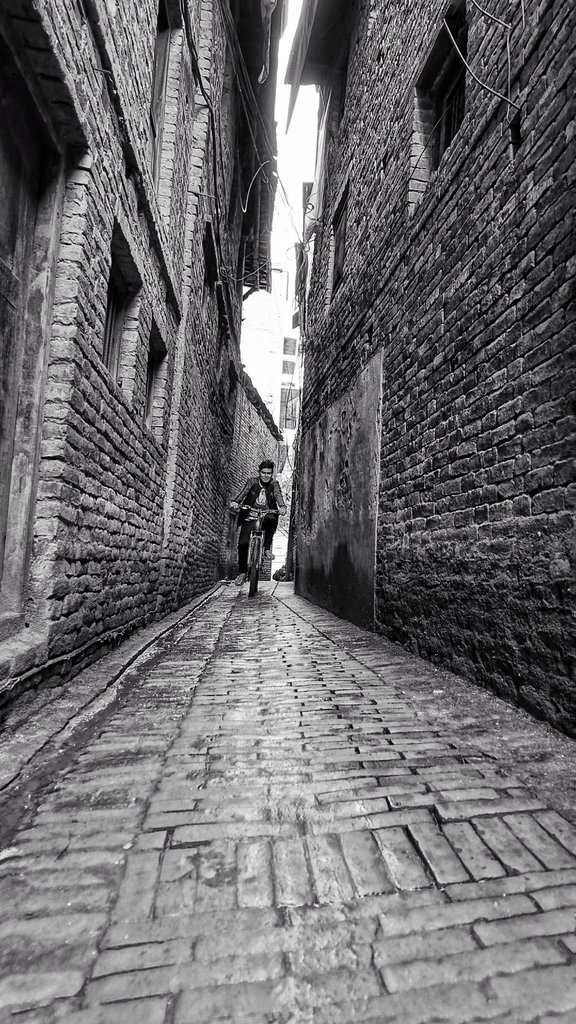 Nothing like having a chat and watching the world go past This window has seen it all And so has this tree 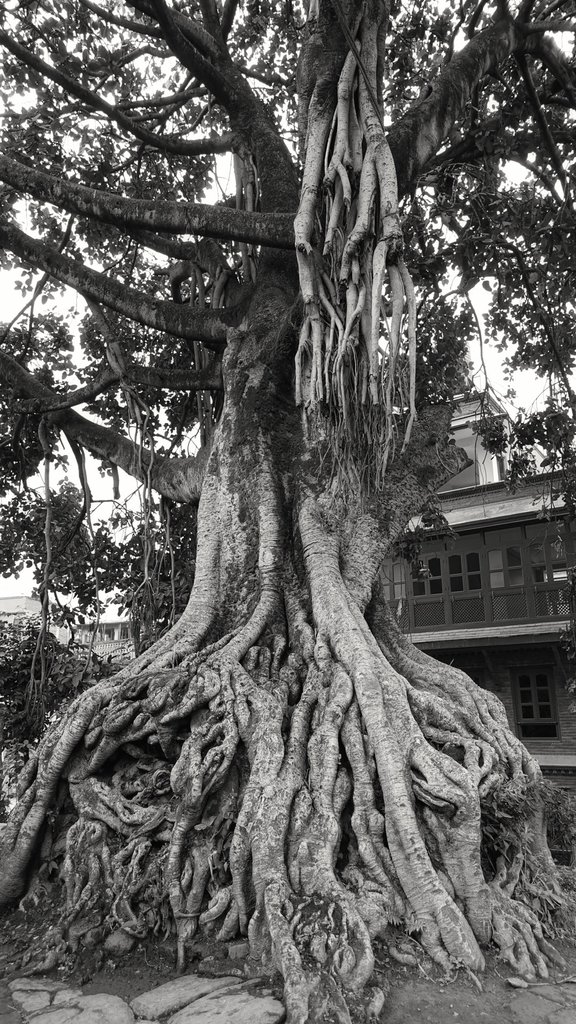 I’m just going to be blunt and honest about my experiences on this trip.

Disclaimer – The opinions and views expressed in this report are based on “my experiences”. My judgements and conclusions are based on decades of travel to numerous countries and living and travelling in southeast Asia for the past 5 years. If you’ve had a different experience in Nepal and do not agree with my views and opinions then that’s exactly what you had, a different experience, it doesn’t make me wrong and you right or vice versa.

Currency – Nepali Rupee or $US at popular tourist areas.

Weather – We went in April (spring), we had 2 flash floods and storms nearly every afternoon for more than 2 weeks. We hardly saw any of the big peaks due to heavy air pollution and low-level cloud. It was surprisingly hot in the lowlands and down to single figure temperatures at night above 2,500m.

Bike rental – Pulsar (Indian made, single cylinder 220cc), $12US p/day, I couldn’t afford the $70US p/day they wanted for a CRF250. I’m not even going to mention the name of the motorbike rental company I used to rent the bike. The clutch died on the first day, they reluctantly refunded my money for a new clutch but accused me of abusing the bike. The chain and sprockets needed replacing after the first week and they refused to refund the money that I paid. They were condescending, arrogant and unhelpful once they had our money.

Roads – Left hand side driving/ridding. Beyond the major tourist areas, the roads and highways are a mixture of some nice sealed roads but mostly broken up pot holed black top or unsealed and extremely rough roads with river and quarry rocks embedded in the mud and dust, cattle wandering around, garbage and even sewage everywhere. The dust and truck/bus exhaust smoke was horrendous, even wearing a mask it caused nausea, sinus/respiratory infections. Most drivers/riders were responsible and safe, some were on a death wish.

Hotels – Reasonable standard of hotels at popular tourist areas, $20US to $200US. Very poor standard in most other areas, $15US to $50US. Poor standard meaning intermittent or no - power, no wifi, no hot water, unclean/torn beds/linen, exposed electrical wires, broken lights, no TV, mold, insects, cracked/broken tiles, toilets, windows, run down, unmaintained etc.

Food – Boring and often dangerous due to poor food hygiene, preparation and a lack of refrigeration. Most of us suffered mild to severe diarrhoea and nausea every week!

People, culture & customs –
A mixed bag, some were friendly and helpful, others were opportunistic scammers. I was over charged for bike maintenance, parts, hotel rooms, food and other day to day items, dual pricing was common. Most people were indifferent or worked hard at being deceptively friendly to get to your wallet. Tourist areas were relatively clean, however, beyond these areas the garbage was appalling, roadsides and waterways are all used for garbage/waste/sewage disposal. It’s mind blowing that they haven’t sorted waste disposal in such a small country with 29M people that promotes itself as an environmental adventure paradise!

Would I go back to Nepal or would I have done it differently knowing what I know now? –
Despite the pretty photos and videos I will never go back to Nepal! All the issues I experienced have well and truly cured my illusions of Nepal! But if I was to advise someone who wanted to go then this is how you should do it. Take 2 weeks, fly to Pokhara, rent a bike from a company like Hearts & Tears bike rental and tours. Ride to Muktinath, enjoy the mountain scenery, do some of the back roads and some trekking, ride back to Pokhara and fly home. You aren’t really missing out by not going anywhere else, in fact if you took the big mountains out of Nepal you would have absolutely no reason to go there.

Thanks for the fine report and great pics Johnsy.
I also appreciate your frank summary.

2wheels said:
Thanks for the fine report and great pics Johnsy.
I also appreciate your frank summary.
Click to expand...

Thanks for your positive feedback, seems most people don't like an overly honest report lol

Johnsy said:
Thanks for your positive feedback, seems most people don't like an overly honest report lol
Click to expand...

Well, I certainly do!

I love your insight.

Great stuff Steve warts and all love it, no need to dress it up if you didn't like it why flower it up people should applaud your honesty mate.

A warm welcome back to the forum too.....

Thanks mate much appreciated

bsacbob said:
Great stuff Steve warts and all love it, no need to dress it up if you didn't like it why flower it up people should applaud your honesty mate.

A warm welcome back to the forum too.....
Click to expand...

Thanks Bob it's good to be back, I like the new software for uploads btw....... nice work

Thanks for the informative RR. I'm going in September-solo. I like the "tell it like it is" approach. Some people may want to go back for 3 months. They turned left when you went right. Seeing a place on a sunny day verses a gloomy day sure makes a difference to me on if I liked it or not. You can't help that. Viewers can read all RR's and decide for themselves. I've been to a lot of places and don't have high expectations anywhere. Tourism companies can describe a garbage dump and make it sound like a MUST SEE point on a trip. I value your opinion. Thanks again.

Captain_Slash said:
A great report Steve and good to see you back posting on here again
Click to expand...

Thanks mate, you enjoying that new 310GS ?

Doogle said:
Thanks for the informative RR. I'm going in September-solo. I like the "tell it like it is" approach. Some people may want to go back for 3 months. They turned left when you went right. Seeing a place on a sunny day verses a gloomy day sure makes a difference to me on if I liked it or not. You can't help that. Viewers can read all RR's and decide for themselves. I've been to a lot of places and don't have high expectations anywhere. Tourism companies can describe a garbage dump and make it sound like a MUST SEE point on a trip. I value your opinion. Thanks again.
Click to expand...

I hope you have a great trip mate, I should have done it solo too

Thanks for taking the time to write the report Steve.

Johnsy said:
Thanks mate, you enjoying that new 310GS ?
Click to expand...

I sure am Steve

Thanks for the report.
I did a ride there in April also, but different route.
I've ridden the Himalayas in India so decided to ride a loop to the south.
Kathmandu downtown was the typical tourist trap but once I left there people were super friendly wanting to talk with me, take photos with me, I was invited for lunch had mum try to marry me off to daughters and lots of friendly banter about cricket.
For sure I'll return, but late in year for clear air and no rain and as you suggest I won't rent out of Kathmandu next time the roads are so bad.
You must log in or register to reply here.
Share:
Facebook Twitter Reddit Pinterest Tumblr WhatsApp Email Link
Top Bottom