We're getting reports that after the shootings near the Indian border that Myanmar is currently shut to foreign vehicles.

As you can imagine causing havok with foreign vehicles in Thailand

GAUHATI, India (AP) — Heavily armed rebels on Thursday killed four Indian police officers in an ambush on a highway they were guarding hours before the visit of the top elected official of an insurgency-wracked northeastern state, police said.
Another three officers were wounded in the attack in Lokchao area in Manipur state close to India's border with Myanmar, according to the police control room.
Manipur state Chief Minister Okram Ibobi Singh postponed his visit to the region following the attack. Last month, Singh escaped unhurt after shots were fired at him and his entourage as he was getting out of his helicopter at the Ukhrul helipad in a nearby district.

On Thursday, the militants opened fire on the police patrol with assault rifles, killing one officer on the spot. Another three wounded officers died in a hospital later, police said. An exchange of gunfire lasted several hours in the region, 70 kilometers (45 miles) south of the state capital Imphal.
Hours later, the insurgents attacked another patrol in the area, wounding one more police officer, police said.
Police blamed a faction of the National Socialist Council of Nagaland for the attack. Separatist groups accuse India's government of exploiting the region's rich natural resources while neglecting local development.
Most of the main rebel groups in Manipur state are not engaged in cease-fire talks with the Indian government, unlike those in other remote northeastern states.
The mountainous region, known for its natural beauty, has been battling insurgencies for decades.

We have been told that one vehicle has been offered an alternative detoured route to transit Myanmar around the problem areas at a higher cost.

Did some checking and looks like transits still possible. An agent at the border yesterday 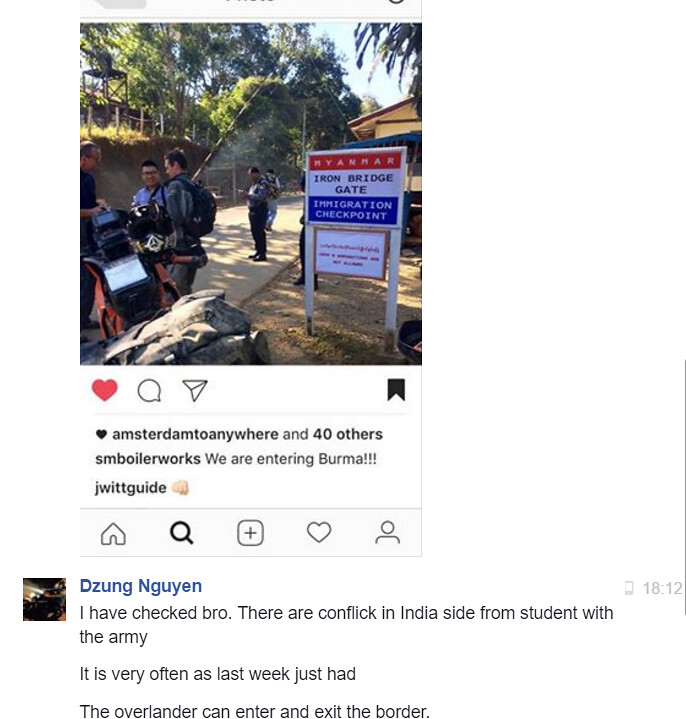