(CNN) &mdash; At least 47 people were killed in a Lao Airlines plane crash in the southern Laotian province of Champasak on Wednesday afternoon, witnesses said, according to the country's national news agency, KPL.

The plane was headed from the country's capital, Vientiane, to the provincial capital of Pakse, an official with the Thai Foreign Ministry said. The official, who did not want to be identified, said Thai nationals were among those on board.

Witnesses said bad weather appeared to be a factor in the crash of the ATR propeller aircraft, according to KP

BANGKOK, October 16, 2013 (AFP) - A Lao Airlines plane carrying 44 people from the capital Vientiane to the southern town of Pakse crashed killing all on board on Wednesday, a Thai foreign ministry spokesman said.

"I can now confirm, according to our reports, that all 44 people on board have died, including five Thai," he told AFP.

An official at the South Korean embassy in Bangkok told Yonhap news agency that three of their nationals were also among the dead.

Pakse is a hub for tourists travelling to more remote areas in southern Laos.
A Lao Airline official in Vientiane confirmed the crash, but was unable to provide further details of casualties.

She told AFP that the plane had set off from Vientiene on time at 2.45pm (0745 GMT) and was supposed to arrive in Paske just over an hour later.

Thailand's English language Bangkok Post reported that the plane had crashed into the Mekong River in bad weather at it tried to land at Pakse airport.

Pictures on Thai television showed a small plane, half submerged in the river, with what appeared to be bodies lying on the banks.

An official at the Vietnamese Embassy in Laos told AFP on condition of anonymity that all on board the plane had been killed.

Founded in 1976, the carrier operates a fleet of ATR-72 turboprop, Airbus A320 and Chinese-made MA60 planes, serving domestic airports and destinations in China, Thailand, Cambodia and Vietnam, according to its website.

It has a chequered safety record.

Eight people died when a plane operated by the airline -- then called Lao Aviation -- crashed in remote mountains in the
northeast of the country in October 2000.

Communist Laos, landlocked between Thailand, Vietnam, Cambodia, Myanmar and China, is a closed country with a secretive one-party government.

The nation of about seven million people is one of Asia's poorest countries and is highly dependent on foreign donors.

The economy is relatively insulated from global trade and financial networks, though Laos has become a popular tourism destination and mining has played an increasingly important role in growth.

Lao Airline operates domestic flights as well as a limited number of international flights to other regional countries.

The carrier recorded some 900,000 passengers in 2012 and is expected to exceed 1 million people this year, according to a report in the Vientiane Times in March.

It said the country's tourist arrivals reached 3.3 million in 2012, an increase of 22 percent compared to the previous year.

(CNN) -- A Lao Airlines plane crashed as it prepared to land during poor weather in southern Laos on Wednesday afternoon, killing what witnesses said were dozens of passengers, according to the country's national news agency, KPL.
Witnesses said at least 47 people were killed in the crash near the Champasak provincial capital of Pakse, KPL reported, though Laotian authorities have yet to release an official death toll.
The ATR propeller-driven plane was preparing to land when a wind gust appeared to push it away from the airport, KPL reported. The plane crashed on or near an island in the Mekong River, according to KPL.
Remnants of Typhoon Nari have been hitting the area. Pakse has received more than 3.9 inches of rain since Tuesday.

The plane was headed from the Laotian capital, Vientiane, to Pakse, an official with the Thai Foreign Ministry said. The official, who did not want to be identified, said Thai nationals were among those on board.
At least seven French nationals were among the dead, French Foreign Minister Laurent Fabius said in a statement Wednesday.
"Our first thoughts go to the victims' families and loved ones, to whom I address all my condolences," Fabius said.

Don Kho and the location of Pakse Airport 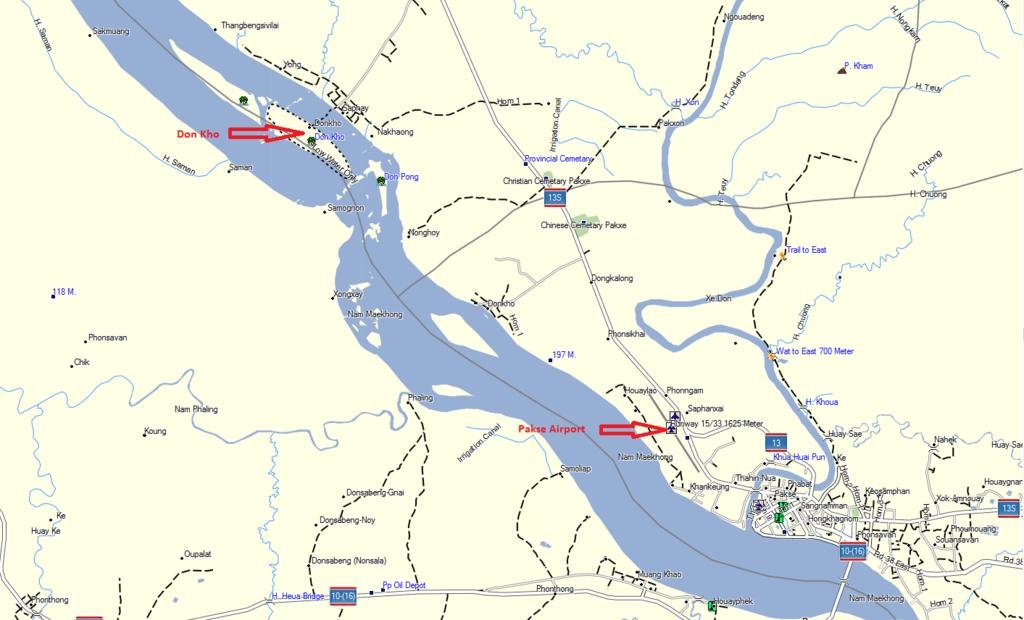 Six Aussies among the dead. May they RIP