Phil Evans with his Chinese guides for entering a 3 week crossing of China.

I was talking with Phil Evans this morning who has just ridden a Triumph Tiger Adventure XC from the UK to Thailand, link to his website below.

We got into the discussion about carnet de passage costs and deposits and he looked at me all puzzled. Every "ride the world" rider we have had come through here up to now has had a carnet de passage. This is a legal financial guarantee issued by a licensed guarantor (the RAC in the UK is one body that can issue one for instance), underwriting that your foreign registered vehicle is temporarily in "their" country and will exit in a pre-defined time. More here on carnet de passage http://en.wikipedia.org/wiki/Carnet_de_Passage.


Phil Evans has told me that he hasn't had or needed a carnet de passage in the whole 14,000km trip from the UK to Thailand, including crossing China. Details of his route are below:

This is the rough route I’ll be taking. Traveling through: 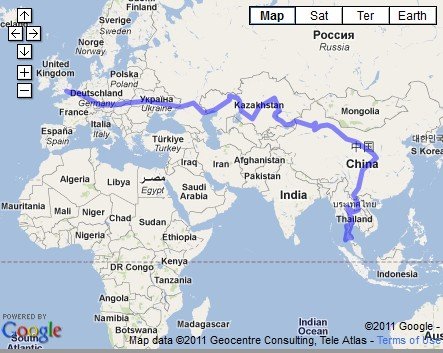 just wonder how much he spend going into china?


singaporedream said:
it is possible.

just wonder how much he spend going into china?
Click to expand...

Talking with some other experienced riders, it seems Iran is the one to avoid on this route if you want to do it without a carnet.


singaporedream said:
it is possible.

just wonder how much he spend going into china?
Click to expand...

"To Carnet" or "Not to Carnet" is part of the route planning process and part of the economic or budget strategy.

One Brit I met in Nepal had managed to get his GB registered motorcycle into India without a Carnet, but spent nearly two weeks securing letters of Guarantee from his embassy to Mumbai to free up his motorcycle from Customs to travel from there to Nepal. He had to pay storage for the motorcycle while in Customs. What is two weeks of time worth staying in a guesthouse/hotel, shuttling back and forth across town, emailing, and making phones calls compared to purchasing the Carnet? Once he got to Kathmandu he decided not to go through the hassle again because he had to go back through India and purchased a Carnet from GB which had to be sent to him be DHL or Fed Ex, another two week down time.

He has been the only motorcycle traveler I have met who managed to get into India without a Carnet, the other 99.99% had the Carnet.

I did India, Nepal, Bangladesh (and the Kingdom of Sikkim) without a Carnet, but only because I used a motorcycle I registered in India and selected a very remote border crossing to leave India for Bangladesh (so remote there was no road between the two borders exit and entrance - had to ride an unused railroad track, then ride the footpaths between the rice paddies ) and deal with a drunk Customs/Immigration official in the late afternoon. All a learning experience, not to be repeated. Had I been traveling with a Carnet I could have taken a much easier route/border crossing.

Paying for guides, fixers and a Carnet can make the overland trip much easier, but for me the general routes around the globe have usually been an economic function based on time and money.