We had a bit of a chat about heading to the Lampang Bua Tong field at last week's Ulysses Club Thailand meeting. With too much on over the weekend, and a crazy number of out of town holiday drivers on the road, we firmed up our plans whilst chewing on some ribs and watching the final MotoGP of the year - and put it up as a club ride for Monday.

Come Monday, we had a reasonable showing for such short notice. Self and Tum on the old Multi, Kevin on the Panigale V4S, Alex on the Monster, Gary on the Versys, Shaughan plus one on the Africa Twin, Lachie and Ow on the 500X and Deere and Aoy on one of the hire 500Xs.

There was still a crazy amount of traffic on the road, particularly noticeable, as we'd decided to head down the Superhighway, rather than our usual selection of backroads. We planned it as an extended figure eight loop, making loops at each end - through the Mae Moh area and again, 40km short of Chiang Mai on the return, we'd head up the delightful southern Canal section that Colin had found for us. Unfortunately Gary had to head back to Chiang Mai and peeled off just before the Lampang flats. We negotiated the ongoing construction in Lampang and out to the turnoff from Route 11 to the Mae Moh area.

Two of us on Ducatis were enjoying the nice straight when unfortunately a panel on mine decided to part company. My fault... someone else had fitted it that morning and I didn't check the lock mechanisms, which appear to have been overlooked during fitting. I'm fairly sure we were right on the speed limit when it let go. Let me say that again, I'm sure we were right on the speed limit. Oh, did I say that twice? Anyhow, I felt it slide past my knee - more of a tap on the knee as it flung off. It hit the road and then skidded up the Panigale's fairing and over Kevin's helmet. It didn't survive the experience. Deere managed to retrieve most of the pieces.... but they are beyond redemption.

Anyhow.... it was on to the Mexican sunflower fields

Past the power station on the right and the golf course on the left, around the smaller dam and up the hill to the viewpoint

There's a dirt loop through the fields which is worth doing 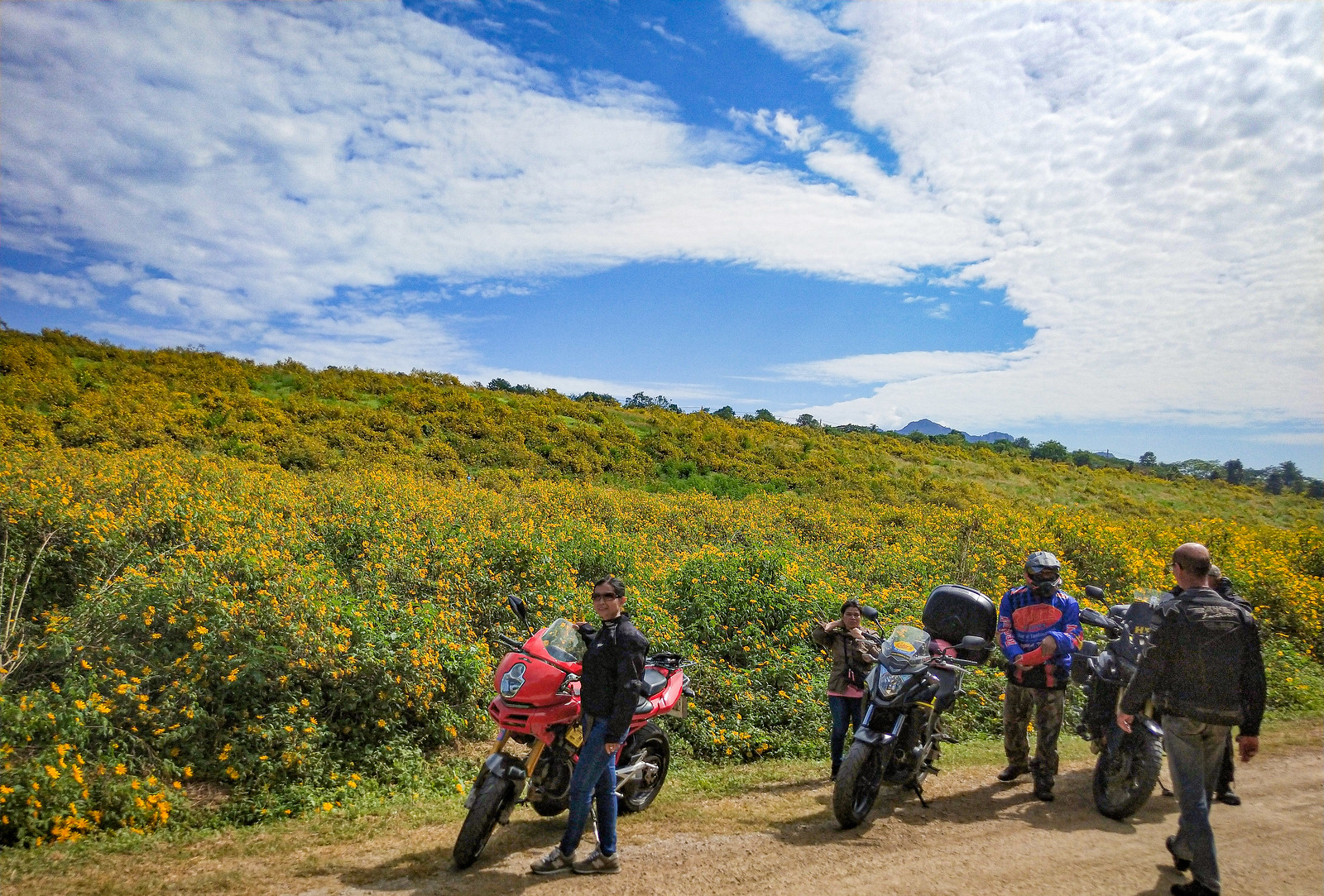 Deere showing off his plastic collection and Tum hiding the damage Never get between a Thai lady and a field of flowers 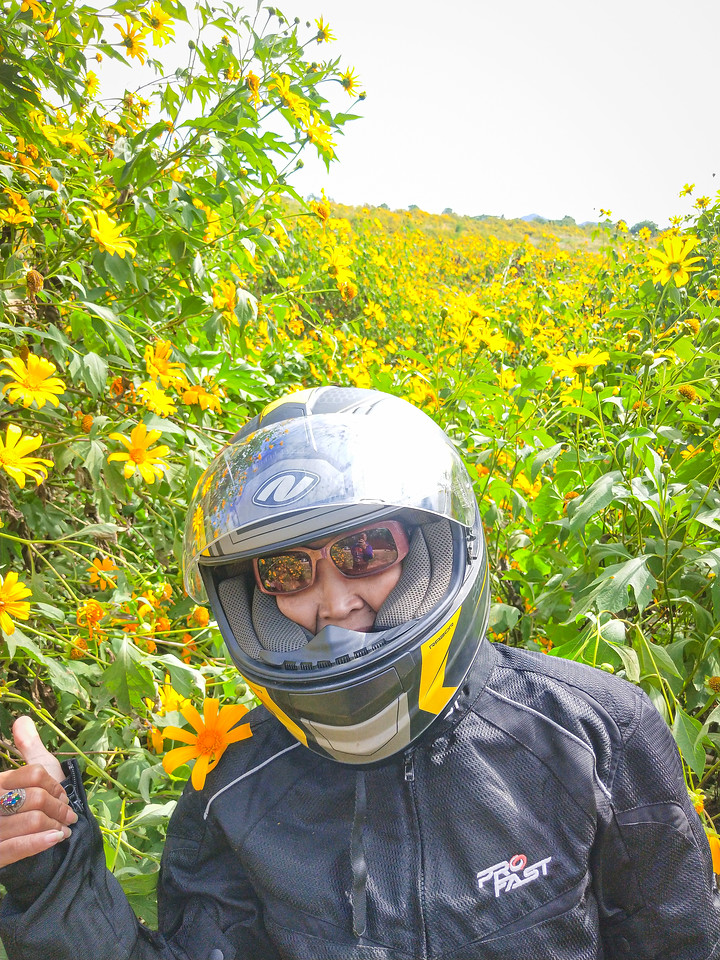 There's a viewpoint up top in this photo, which we headed to next Most of the view from there is the lignite mine. Big bloody hole in the earth

We'd probably have eaten at the restaurant up there, but after a couple of guys had ridden past the security guard who was waving frantically at the "no motorcycles" sign, we decided to eat in town. Cars are allowed in, not bikes. Cost 'em ten meals. 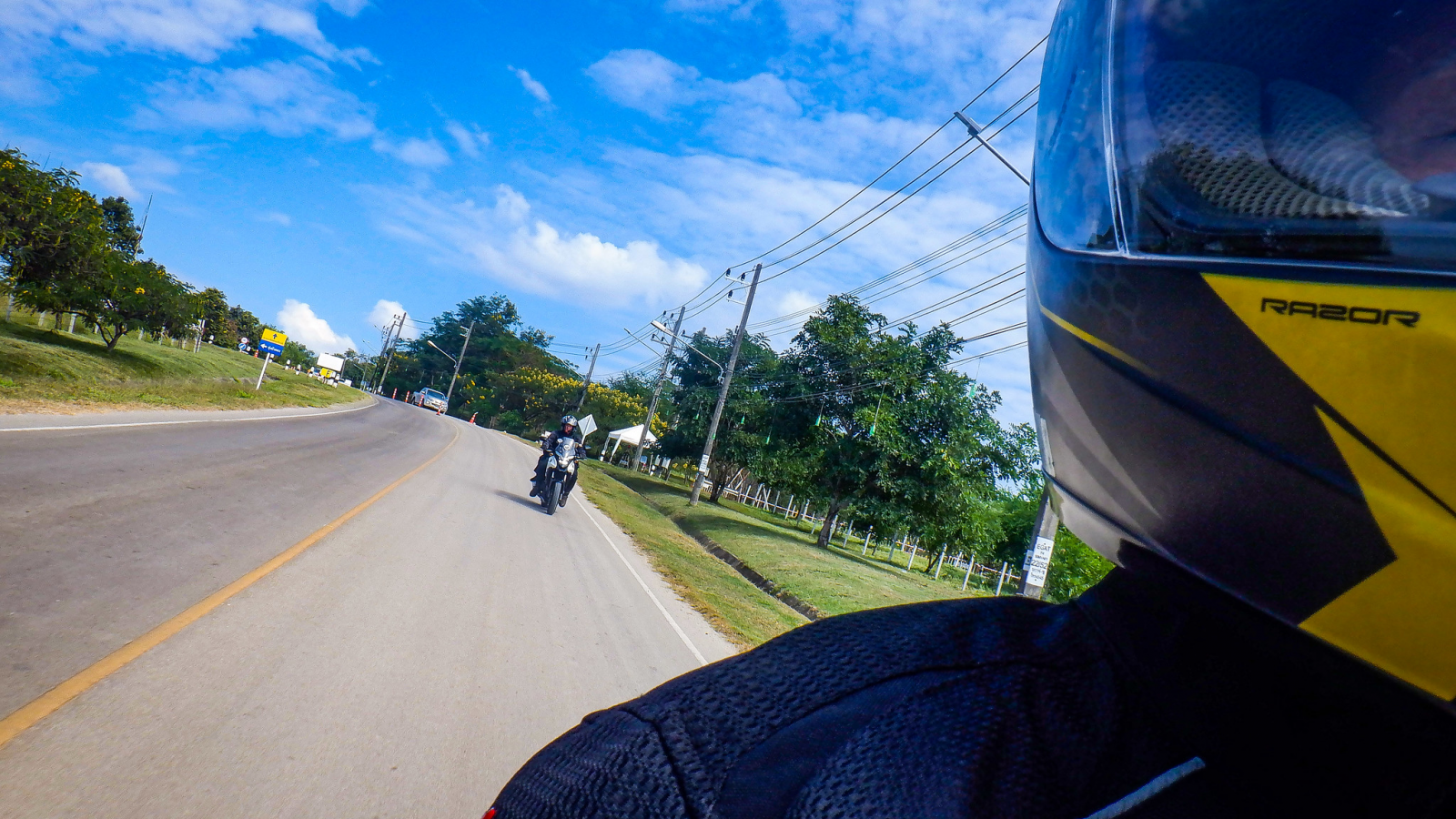 We headed back to the line of old shovels for a couple of pics. I did a worldwide study of the market for these things for the CSIRO about 20 years ago - they were developing mining software aimed at minimising the amount of shifting spoil. Quite an interesting project. These machines are small ones 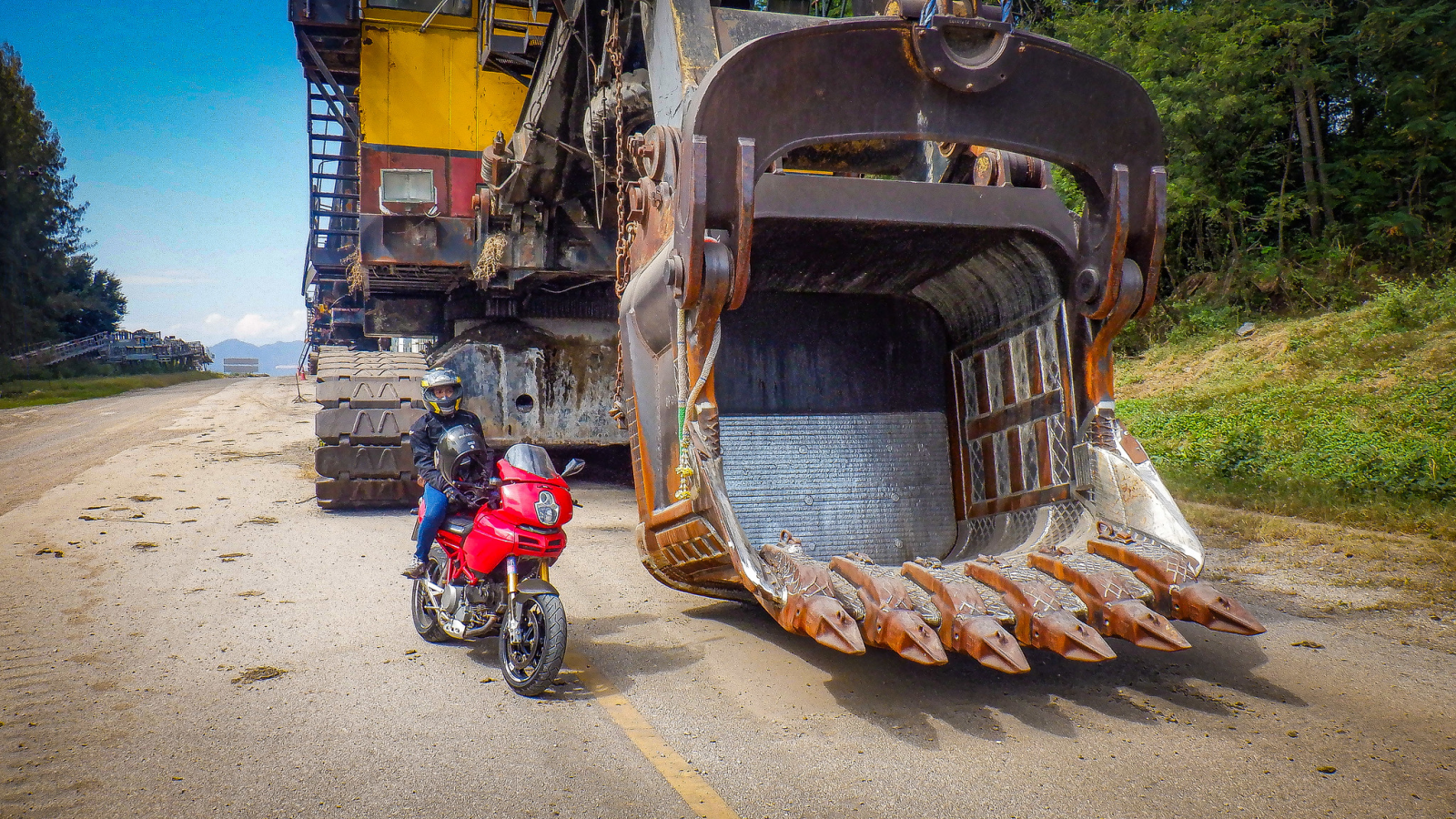 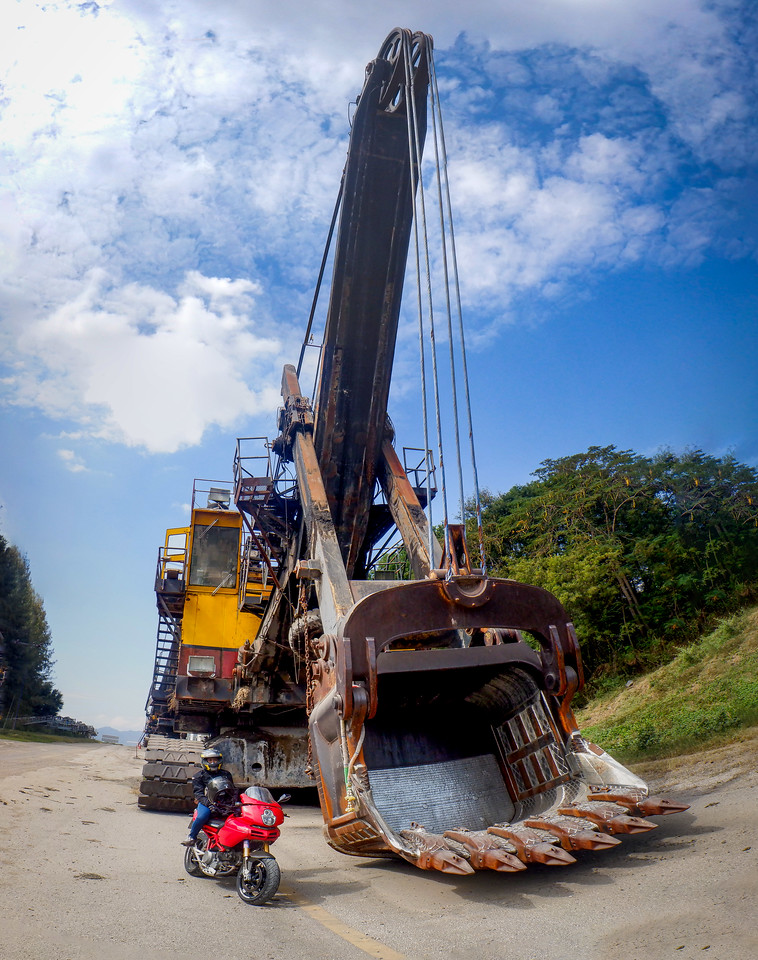 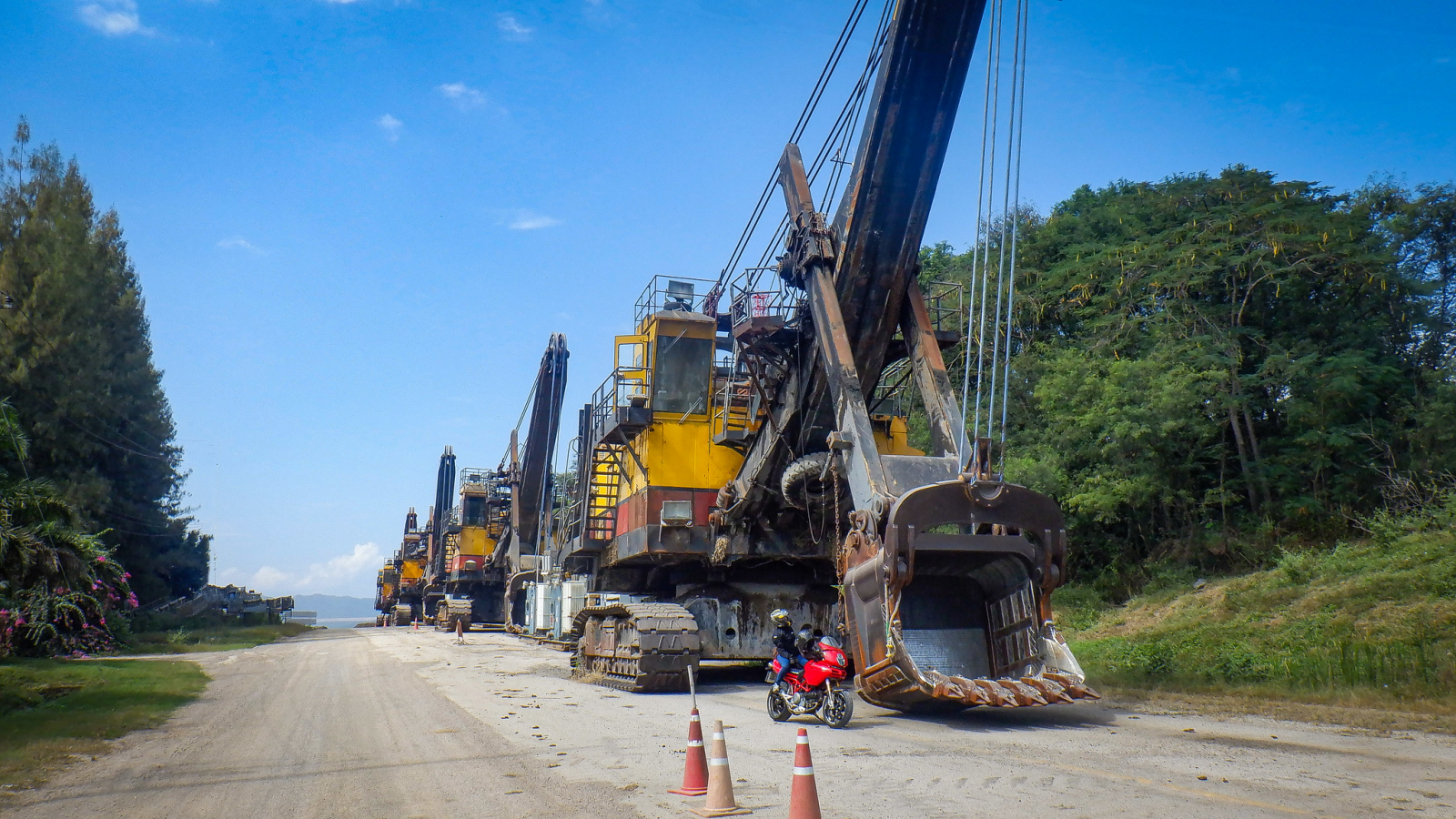 Notice anything on the jib? 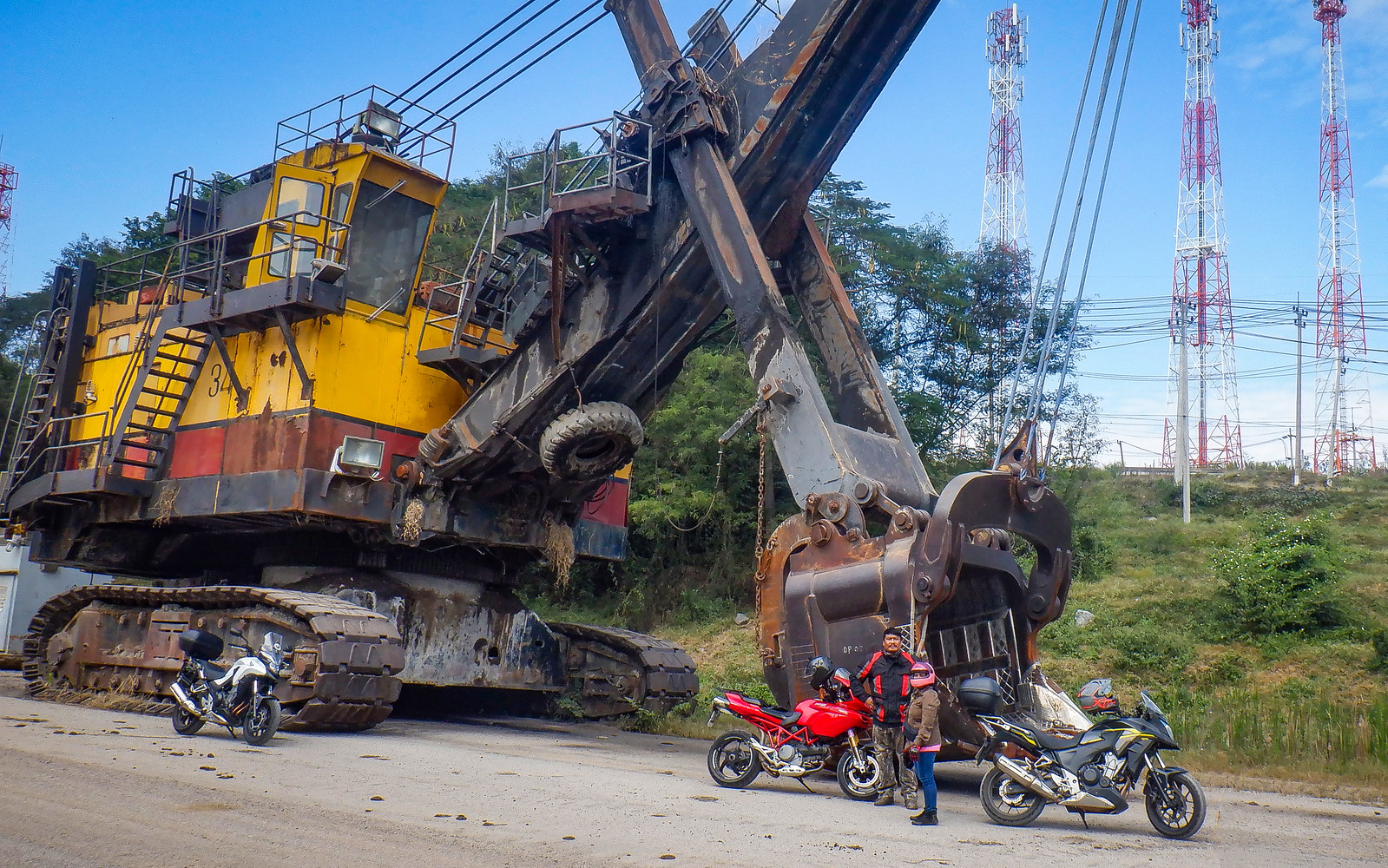 So - from there it was back into Lampang, to the Khao Soi lady's place... to find a sign saying she was opening at 3. Hmm. Nine meals missed there too... Kevin having headed straight back to pick up his kids from school.

It was down to the Riverside for lunch. Nice old Honda at another restaurant. Having had Deere's smoked ribs on Sunday night, with Tum's apple sauce, I thought I'd better try "Lampang's finest ribs" 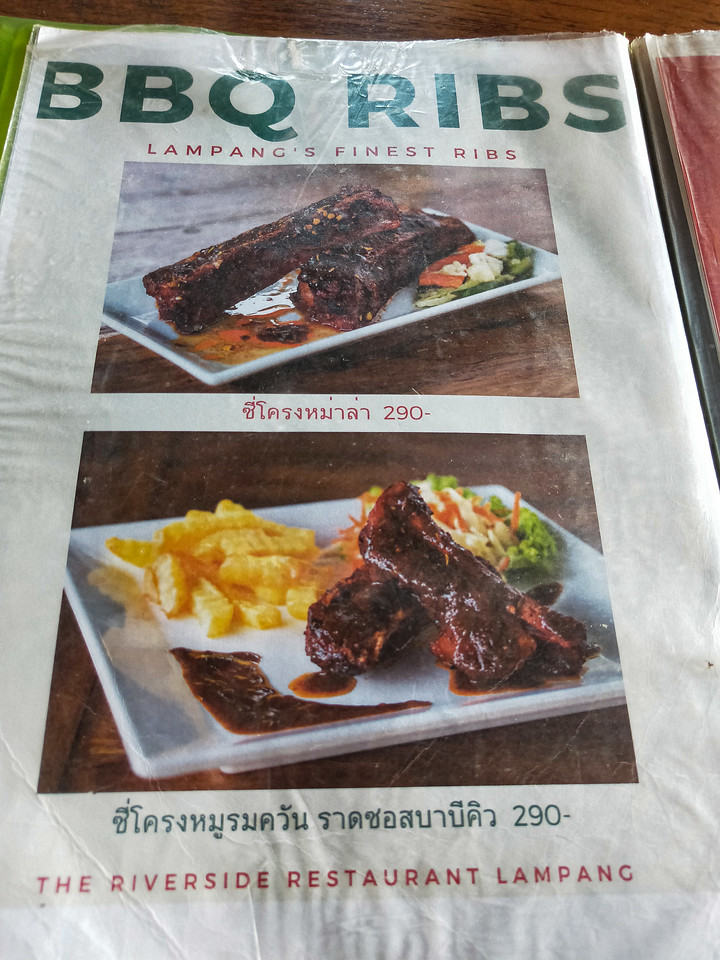 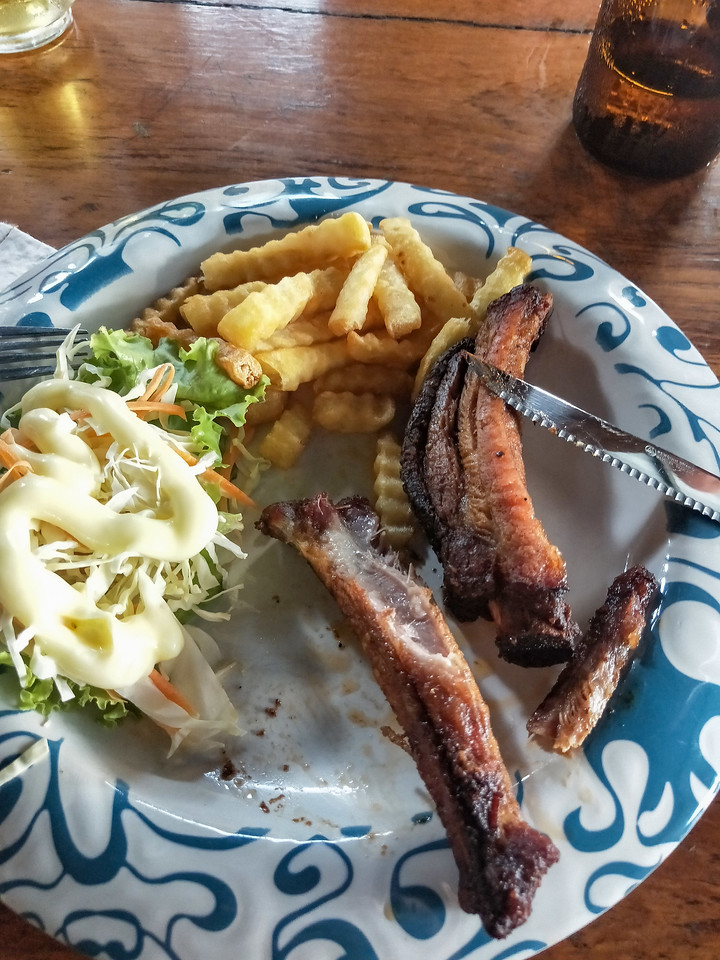 Oh well, the view was nice 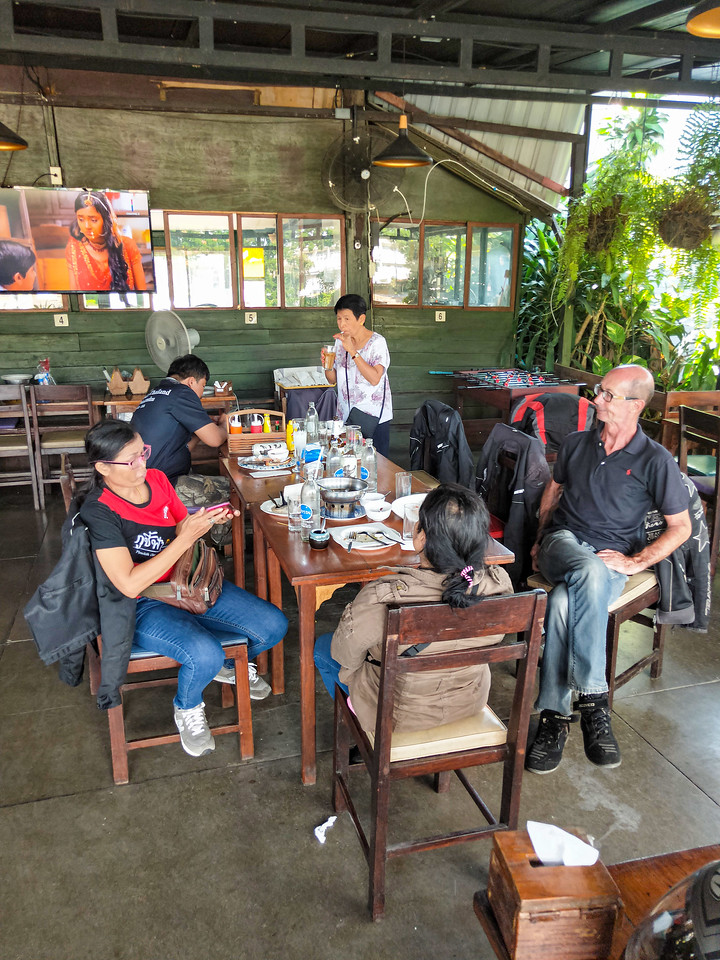 Back on the bikes. Clearly the trip was an eye-opener for Aoy (our cook) I should dig out some stills from the video along the canal... it's a great little road. Here's a p&s shot of the dam as we went past

....... and it was home for some ribs and smoked duck (menu refinement ahead of Thanksgiving on Thursday). So, that made it ribs for three meals out of four for me. It's Taco Tuesday today, thankfully. Can't eat ribs every day Oh yeah - the trip home wasn't without incident. This clown on the 1317 decided to pull left from the u-turn lane. No ABS on the old Multi, and she sure squirmed around a lot - I suspect there wasn't a lot of rear wheel contact at the time.

Relive link, with photos from Shaughan. He came home a slightly different route (same as Lachie and Deere, who he met along the way).

Nice ride report, I'm planning a ride with the wife around this way for end of January, could you tell me exactly where these old shovels are? wouldn't mind going for a look whilst in the area, if there still there that is.

Rudeboy said:
Nice ride report, I'm planning a ride with the wife around this way for end of January, could you tell me exactly where these old shovels are? wouldn't mind going for a look whilst in the area, if there still there that is.

EDIT found them on google maps :-)
Click to expand...

If you have a look on a google map of the area, turn on the satellite image and you will see them on the left, just before the golf course.
B

The Riverside Lampang is a personal favorite of mine when in town. It used to be owned by a Belgian lady but not sure if that is still the case. I had been absent from that part of Thailand for several years and after returning, it appeared as though the place had undergone a change of ownership, as I haven't seen her for over a decade now, but that could just be a coincidence.

blackwolf said:
The Riverside Lampang is a personal favorite of mine when in town. It used to be owned by a Belgian lady but not sure if that is still the case. I had been absent from that part of Thailand for several years and after returning, it appeared as though the place had undergone a change of ownership, as I haven't seen her for over a decade now, but that could just be a coincidence.

I think the belgian woman runs or manages the Riverside Guesthouse (situated just nearby in Talat Kao rd) nowadays but the Riverside Restaurant is owned by thais. I will ask my gf to inquire about the details and come back with updated info...
You must log in or register to reply here.
Share:
Facebook Twitter Reddit Pinterest Tumblr WhatsApp Email Link
Top Bottom