There has finally recently been some world media coverage and backlash to the proposed damming of the Mekong and its tributaries. Lets hope the Vietnamese can come to some agreement with the Laos PDR to stop the damming and find a solution to alternative income. Here is one new report from March and a map from 2008 showing the proposed areas, it is very scary.

BANGKOK – The first in a new series of 11 dams planned across the Mekong, Southeast Asia’s largest river, could break a special bond between two communist-ruled countries.

Critics in Vietnam are concerned over a 1,260-megawatt hydropower project planned by their smaller, poorer, land-locked neighbor, Laos. They call it an environmental disaster.

Laos, however, wants to be the powerhouse of the region – to sell power to its neighbors and earn enough to help the poor that are a third of its population of 5.8 million.

The dam in an idyllic hill setting in the north Laos province of Xayaburi (or Sayaboury), will be built by a Thai developer. Thailand is expected to buy 95% of its power to fuel its booming economy.
Environmentalists say the Xayaburi dam and 10 more such constructions planned on the Mekong’s mainstream, nine in Laos, make a Faustian bargain.

The potential threat of the US$3.5 billion dam in the Mekong delta, Vietnam’s “biggest rice producing and fish farming area”, has also been highlighted by The Saigon Times.

Such criticism goes against the spirit of a 1977 treaty of friendship and cooperation that binds them in a “special relationship”.

“The criticism reflects the concerns and the opinion of the public and the government,” said Nguy Thi Khanh, deputy director of the Centre for Water Resources Conservation and Development, an NGO based in the northern Vietnam city of Hanoi.

Vietnamese scientists have also said “the project should be stopped”, Khanh added during a telephone interview from the Vietnamese capital. “Vietnam’s silence about this dam has been broken.”

For its part, the Laotian government is sticking to its plan. “We are confident that the Xayaburi Hydroelectric Power Project will not have any significant impact on the Mekong mainstream,” officials from Vientiane (the capital of Laos) have explained in a note to the Mekong River experts.

Mekong experts from Cambodia, Laos, Thailand and Vietnam – the four countries that share the waters of the lower Mekong – are meeting in late March to approve the Xayaburi dam plans.

Laos has appealed to its neighbors not to place any blocks to the project. The government does not want to raise the political stakes to the point of being compelled to get its dam blueprint approved by ministers or even prime ministers.

“There will be no need for any extension of time and no need to forward this matter to the [ministerial] level,” revealed the note by the Laotian government to Mekong River experts.

This dam issue has become the first major test of environmental diplomacy for the four countries in the lower Mekong, members of the Mekong River Commission (MRC). An inter-governmental body that came up after a 1995 agreement, the Vientiane-based body aims to manage the development of the Mekong basin in consensus. Any plan to dam the Mekong has to be scrutinized for its cross-border impact under a special mechanism, formally known as the Procedure for Notification Prior Consultation and Agreement (PNPCA).

“This is the first time that we are going through the prior consultation process,” Jeremy Bird, MRC’s chief executive officer, told IPS. “Countries do not have a veto right [to stop a dam being built in a neighboring country] yet countries cannot proceed without consultation.”

The MRC’s members have to weigh the provision in the agreement that “a country cannot act irresponsibly to impact its neighbor” against every member’s “right not to agree” and ability to “take its own decision”, said Rudi Veestraeten, Belgium’s envoy to Thailand. MRC is funded by Belgium, along with other European countries, Australia and Canada.

Till now the 4,880-km long Mekong has remained free of dams along its journey through the basin, winding its way past Myanmar along the four MRC partners till it falls in the South China Sea in southern Vietnam.

But upstream, the river’s flow from its headwaters in the Tibetan plateau through southern China has been harnessed by four dams in China’s Yunnan province, part of a cascade of eight mega dams the Asian giant plans. Local activists, environmentalists and even government experts of the lower Mekong are alarmed.

The impact of the Chinese dams on the downstream countries has strengthened campaigns led by Towards Ecological Recovery and Regional Alliance (TERRA), a Bangkok-based green lobby. TERRA warns that dams on the lower Mekong will affect the lives of 60 million people who depend on food and their livelihood from the river.

“Laos has not helped its case because the government has refused to make public the EIA [environmental impact assessment] it has done for the Xayaburi dam,” Premrudee Daoroung, co-director of TERRA, told IPS. “The Laotian government says it is a secret document.” 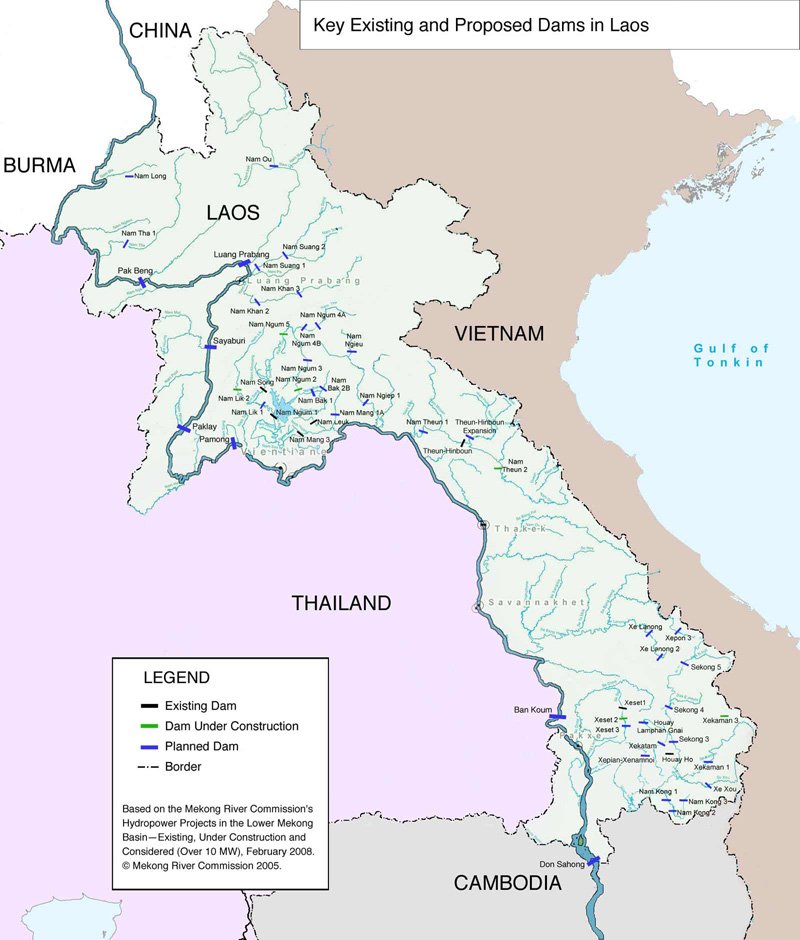 Go here for the big one!