Alternative to R 1B stone road NE Laos to Phongsaly

Alternative to R 1B stone road NE Laos to Phongsaly

Route 1B (in NE Laos), the 150km stone road that goes NE from Pak Nam Noi and joins to R 19 which goes NE to Phongasly is a bitch of a road.

An experienced rider in laos who has a Honda Baja 250 refuses to do this road now as his headlights come loose no matter how much locktite he applies to the fixings nuts.

It's hard on you but harder on the bike, something will come loose, my rear fuel tank which was locktited everywhere nearly fell off --first time ive ever had something come loose on the KTM.

Having dinner with the Guru of laos in Vientiane a couple of weeks ago, Midnight Mapper, he told me there IS an alternative. He tells me its a silky smooth trail that takes 2 days and bypasses the 1B stone road to the east. 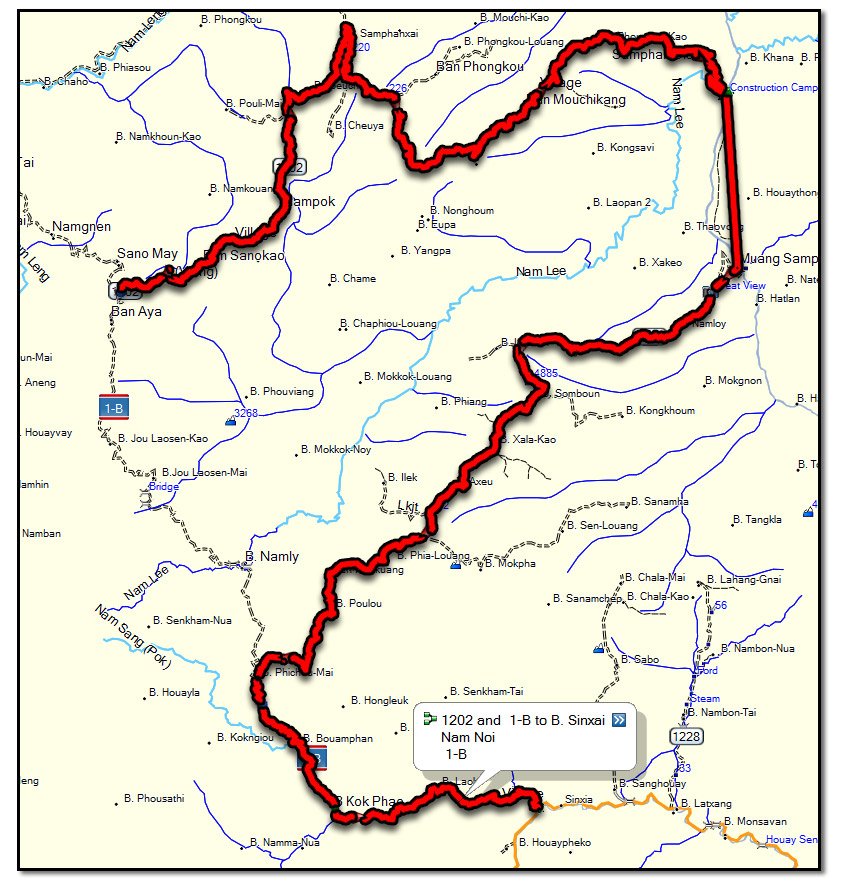 This is pretty interesting as its an unknown route and an excellent alternative to shaking your bike to bits. MM says its beautiful.

i hope to get there in a couple of weeks

Looks very interesting but according to my maps this would cut out only 35 km of the stone road from Phicheu-Mai to just north of Aya and certainly not the whole bad stretch.

By the way, I just saw in the Vientiane Times that they were asking for bids to upgrade the road - funding support from the World Bank.

According to maps I just got there should be an improved dirt road from Phongsaly to Muang Samphan. Will post this map later as I will have to join them first as each district has its own map.

Lone Rider said:
Looks very interesting but according to my maps this would cut out only 35 km of the stone road from Phicheu-Mai to just north of Aya and certainly not the whole bad stretch.

By the way, I just saw in the Vientiane Times that they were asking for bids to upgrade the road - funding support from the World Bank.

According to maps I just got there should be an improved dirt road from Phongsaly to Muang Samphan. Will post this map later as I will have to join them first as each district has its own map.
Click to expand...

I hope its the worst 35km part, looks like a very interesting trail.

Tried to merge the maps together but somehow could not get them to merge properly - so hereby the improved unpaved road (in green) according to maps prepared by the Ministry of Energy superimposed on MapSource which shows also the 2 day shortcut KTMPhil mentioned (in magenta) and the stone road and the asphalted parts (in Yellow) from the turnoff in Sinxai (Rd 2E) to Phongsaly.

It looks like the very north end of the road you have in green, where it intersects R 19 may come out where the 400 year old tea trees are? 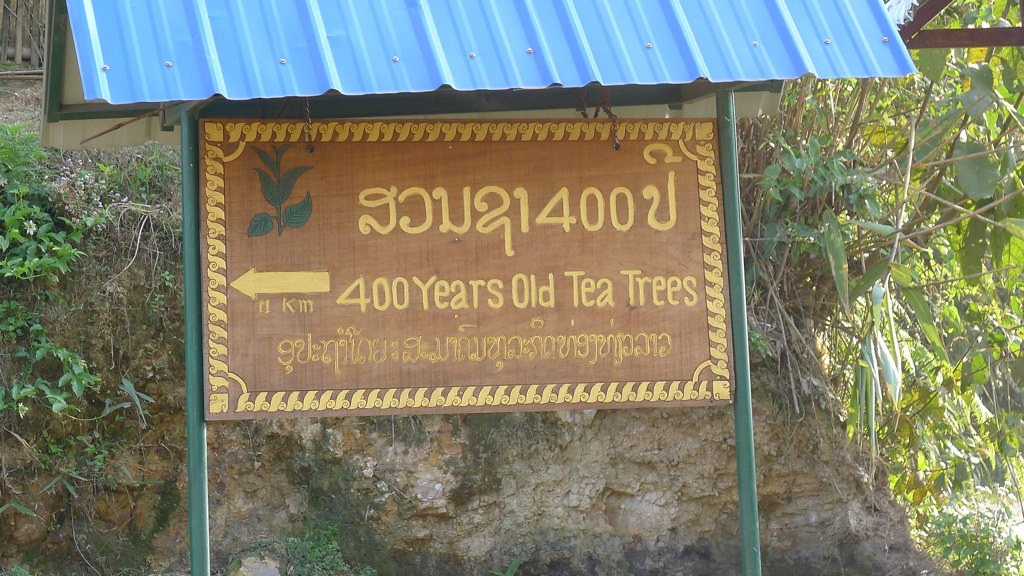 Midnight Mapper gave some more insight into this area to the south of Phongsaly:

"please notice all the roads run the ridge tops here. no roads run perpendicular to the moutain ranges, against the grain.
The green line intersects the "tea plantation road" which you drove. did you see a road running south off the valley?
There is a possibility of a link to this road network though from Pongsali? But no way the red line exists!" 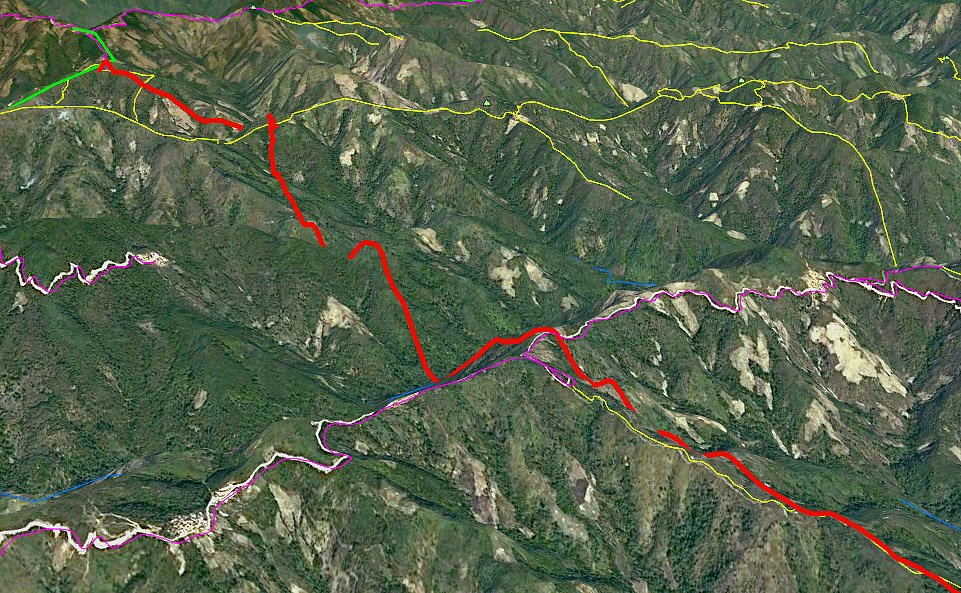 Midnight Mapper thinks this way "may" be possible

"This section looks "real" which would link these road networks, "Tea road" to The "American Road"

This is looking north with the 1st magenta track (that joins onto the northbound light blue track near the top of the picture)being the dirt road last leads to the 400 yr old tea trees (off of R1 19), the second magenta road right at the very top of the picture being the tarmac R 19 that leads ENE (to the right) to Phongsaly

I am not going to speculate - as I said this is what Laos Government maps are indicating with regard to roads. As MM said, this looks like nearly impossible going up and down the valleys and I agree with MM. Will be there in a few weeks and will let you know what I see "on the ground" - that is the best I can do at this point in time.

Alex, RobertH, Som (on her new DRZ 400!) maybe Midnight Mapper (you never know where he'll pop up) & I might head up there after Songkran is finished and see if this route exists.

I think Lone Rider may be headed there too.
B

Now this is what a community of enthusiasts generates, good stuff!!!

I'm loving to see the minds at work discovering new roads and tracks to discover. Its a true joy of living over here and having the opportunity to explore these areas that are off the main roads. All of the beady eyes scouring google earth and Lone Rider pouring over his wealth of contacts and maps, this is great stuff.

I should be landing the beginning of May and Joe will have the KTM back up and running so should be ready for a Laos ride before the rains hit too hard.

Did anything come of this discussion?

From Paknamnoy on the 2E you head north on the 1B then turn right onto the 1234 at Ban Phicheumai.
You follow that to M. Samphan then head north again until the 1202 then head West.
When you get to B. Samphanxai, you turn right & head North until you get to B. Phoumon
Looking at MM's map, you can get to Ban Phoumon & that's within 11klm's of Phongsali, then his map shows a "trail" leading into B. Phagnasi just outside Phongsali.

Looking on GE which is 12 years old, there's nothing north of the Ban Phoumon. It looks a bit dodgy as there's steep valleys & 2 rivers to cross.
You can see the magenta line is the "trail" from B. Phoumon to Phagnasi then the red is the road into Phongsali.

Does anyone know if that "trail" is actually there & is it rideable? 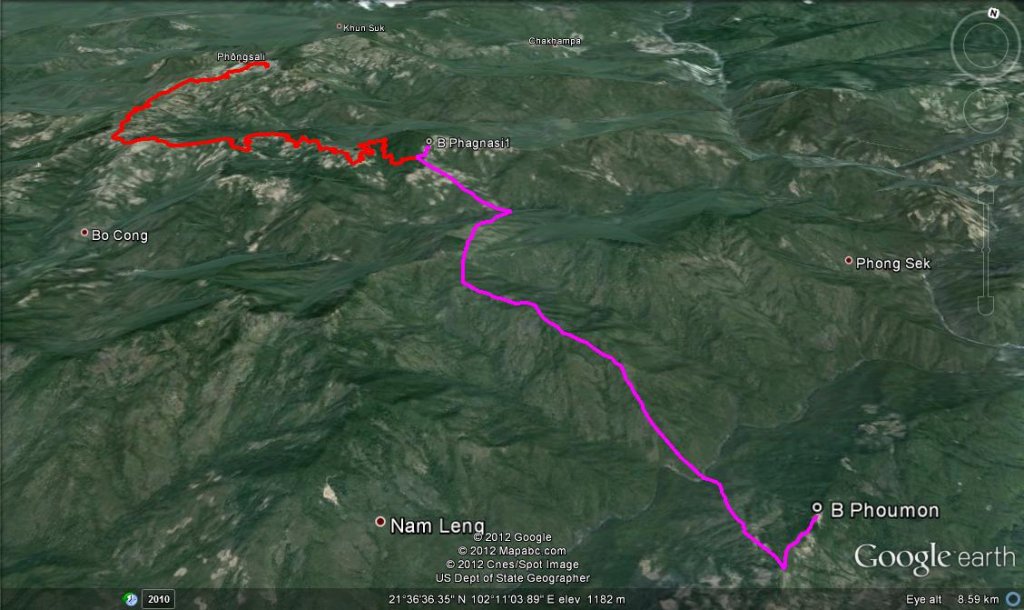 Pounce,
a great unexplored area to be sure. My last foray into that region, the normal weather was in place for Phongsali, Cool (cold) and a dreary misty rain. The kind of weather that is more conducive to sitting in front of a fireplace watching football. Plans for exploring those greasy slippery red clay roads were put to rest and a quick run down the mountain to better weather was the call. A few days later I tried from the eastern side but cold fog and drizzle sent me down the mountain in an Eastward direction.
Hoping to get up there again soon! When is your scheduled arrival?

We should get into Laos on December 1st. It should be dryish by then?
Check you PM's, I've sent you one a few days ago with a few questions.