421km high-speed railway from Vientiane to the Chinese bord

421km high-speed railway planned from Vientiane to the Chinese border 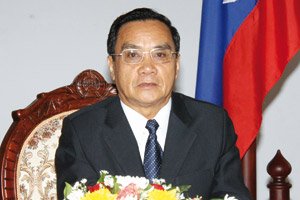 Laos will prepare for the construction of the high-speed rail project that will link China, the world’s second largest economy, to Asean nations via Laos.


The Lao Prime Minister made the announcement yesterday at the World Economic Forum on East Asia 2012 in Bangkok, which was broadcast on Thai television.

Prior to attending the forum, Prime Minister Thongsing Thammavong visited China where Beijing pledged to support the US$7 billion high-speed rail project.

Construction of the 421km high-speed railway from Vientiane to the Chinese border has encountered delays and is yet to start, with the groundbreaking ceremony originally slated for April 2011.

Regional connectivity was one of the main topics tabled at the three-day conference under the theme “Shaping the Region’s Future through Connectivity,” looking ahead to the creation of a single regional market under the Asean Economic Community in 2015.

The Lao premier told forum participants that the railway will link to Thailand’s rail network, eventually connecting Singapore to Kunming in China via Laos.

“In the future, we hope the Lao PDR will be able to connect to other East Asian countries and India through a regional road and rail system,” he told the hundreds of delegates attending the forum.

He noted that the effort exerted by Laos in the past to connect with other countries in the region has enabled the country to record economic growth averaging 7.9 percent over the past five years.

As a result, poverty in families has declined from 33.5 percent in 2005 to 26 percent in 2010. The Lao government has set a target to reduce poverty to less than 10 percent by 2015. To achieve this ambition, the government is targeting economic growth of 8 percent per year until 2015, the premier stated.

He said there are many challenges ahead for Laos regarding Asean Community building, achieving the Millennium Development Goals by 2015 and graduating from the UN’s list of least developed countries by 2020. But the prime minister was optimistic that these goals were ‘achievable’.

Mr Thongsing said connectivity with the rest of the region will convert landlocked Laos into a transit hub for the sub-region and bolster the country’s efforts to achieve its development targets.

“We will endeavour to create the conditions necessary to ensure Laos has basic infrastructure to connect rural and remote areas,” he told the forum, saying this will help rural people to access markets, healthcare services, and education.

“We will give priority to poverty alleviation,” he said.

Laos has attached great importance to eco nomic, social and cultural development while maintaining environmental protection, political stability and social order, the premier said. He added that Laos also attaches great importance to assistance, investment and support from the international community as a driving force to enable Laos to achieve its development targets.

Topics tabled at the forum include cooperation and coordination to cope with potential challenges, women’s issues, basic infrastructure development, agriculture, health and education among other matters, according to a press release from the Lao Ministry of Foreign Affairs.

Asia’s position in the global economy was also scheduled to be tabled yesterday along with sessions on supply chains, geopolitics and how to deal with natural disasters, according to Thailand’s Bangkok Post.

Other discussion sessions include financial integration, education and the labour market.