Ready for an avid adventure seeker, this 1946 Indian Chief is being sold "as is," or a runner for go, not show. It's been in dry storage since 2006. With some TLC it's ready to head out on the highways from Denver, Colorado USA, looking for adventure, or have it boxed up and shipped at your expense to ? I have owned this Chief for 35-40 years, had some great adventures with it, like topping Pikes Peak and surviving a massive forest fire in Yellowstone Park. www.bit.ly/346OUUw has more photos and details. Indian did not make a lot of these Chiefs in 1946, and most are gathering dust in some museum or private collection. I'm taking this out of my studio due to a blown right knee which makes simply looking at the kick starter a cranial painful adventure 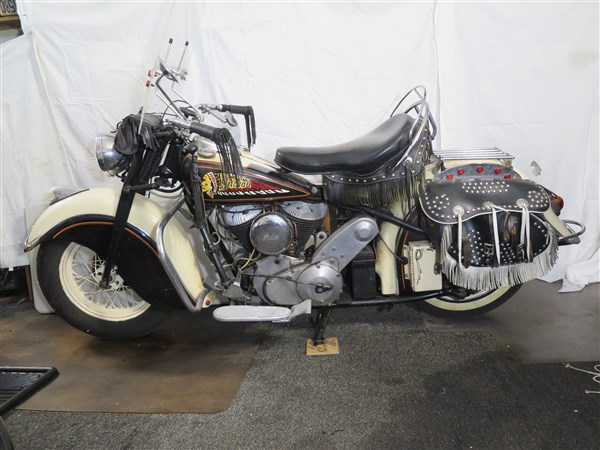 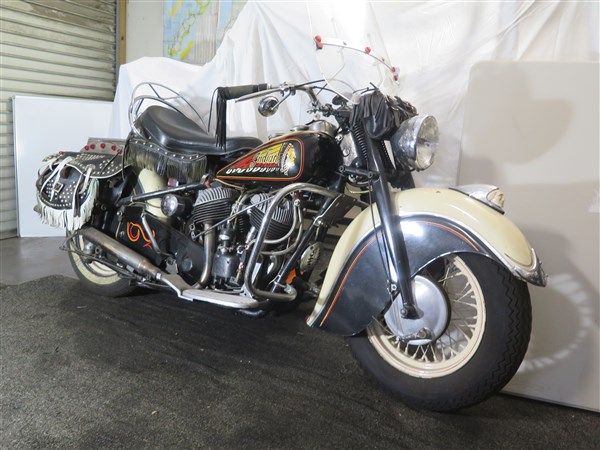 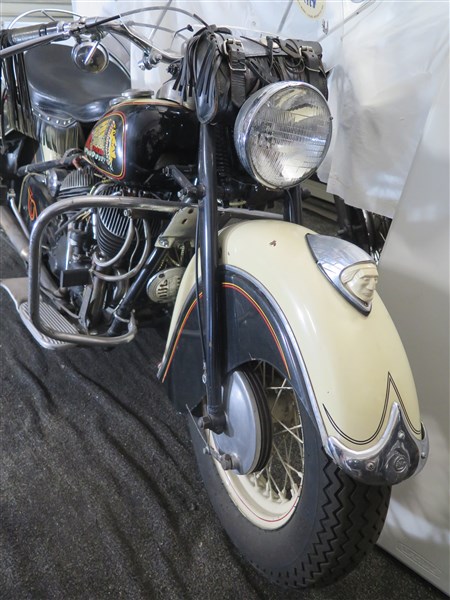 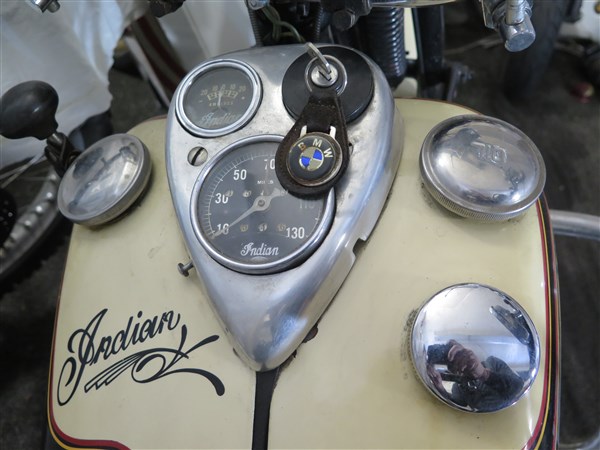 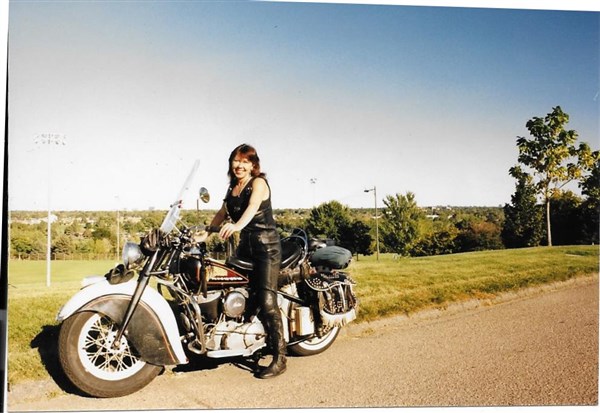 Painful, as knee swells up to the size of an American football after the Chief teaches you what TDC means when kick starting a 1200cc engine and you've not got it 's piston where should be.

As I got older and heavier, the knee paid the price, hyper extending, but not breaking my leg as one of our forum members experienced with a Norton?

This small post has brought a solid inquiry from Vietnam, a collector. Interesting that it might go out of country, 1/2 way around the world.

Steve McQueen's favorite motorcycle was a 1947 Indian "chopper." When I showed him a photo on this custom '46 Indian, he asked, "Wanna sell it?"

Attached is a photo of McQueen's "adventure motorcycle," one writer saying it was his favorite for weekends and adventuring. The back story is he saw one a friend had, wanted to buy it, but the owner did not want to sell. Instead, the owner made McQueen a copy - chopped a '46 standard Indian Chief.

When the McQueen estate was being auctioned, I bid on his Chief, about $6,000 USD. I lost, but next saw it in The National Motorcycle Museum (where my donated 2001 'round the world Kawasaki KLR 650 now rests).

Yeah, painful, but not as psychologically painful as letting this '46 Indian Chief go, and admitting that with age comes memories of youth and lost physical being...kind of a Zen or existential thing. 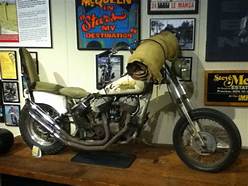 It was a BSA that did my knee in - not from kicking back, but from slipping. Either the pawl disengaged or the clutch slipped - and my fibia punched a hole in my tibia.
D

Motorcycle is SOLD - to an American with a most discerning taste!!


Interesting were the three SE Asia serious inquiries I received, likely the post on this forum. The Indian Motocycles (correct spelling of name is Motocycle without the "r") are well recognized and sought after in SE Asia. The former King of Thailand had a 1940's Indian Chief as a escort motorcycle, at one time one of the only 11 known Indian Motocycles in Thailand.

Also interesting was a day before this 1946 Indian Chief was to go up on eBay for sale I had two offers, one from a German collector, both meeting the Reserve I had in mind, it was almost cosmic. So I saved the eBay fee and did not have to keep lowering the asking price (often a sign the seller does not have realistic knowledge of their motorcycle's actual value).

A third note of interest was the amount of activity from scammers that are out there. One was traced back (not from my deal) to Uganda, but the scammer was using an Alaska Driving License as his proof of identification. A warning: lights should go on if the seller asks for or offers an ACH bank transfer, often referred to as a "wire transfer," which it is not. An ACH bank transfer is a bank-to-bank transfer and can be called back, whereas a real "Wire Transfer" can not.

Again I found that for a "Big Money Buyer" or collector, the cost of shipping, handling and importing a motorcycle is seemingly not important, whereas the asked for or actual selling price of the vehicle is - weird. I once sold a special (German hand made, aluminum) BMW gas tank to a Thai motorcycle collector via his buyer in New York. The ultimate buyer paid about twice for the gas tank (commission, shipping, Customs) than what was my asking price, but the buyer was only concerned with the asking price.

"Thank you" to all for the inquiries and interest in keeping this rather unique and rare 1946 Indian Chief alive and on the roads around the globe. As Sammy Pierce, a well known Indian dealer and aficionado once said, "Old Indians Never Die!"

Note: The new owner said the BMW key fob piqued and enhanced his initial interest in the Chief, and kept it attached to the key as he lovingly fondled his new motorcycle.