The return of BSA

The billionaire chairman of Mahindra Group has said that he hopes the first bikes could start rolling off a production line somewhere near BSA's old factory in Small Heath, Birmingham, by the middle of next year.

Mr Mahindra also hopes to soon start building a research facility in Banbury, Oxfordshire, where electric motorcycles will be developed, he told the Guardian. 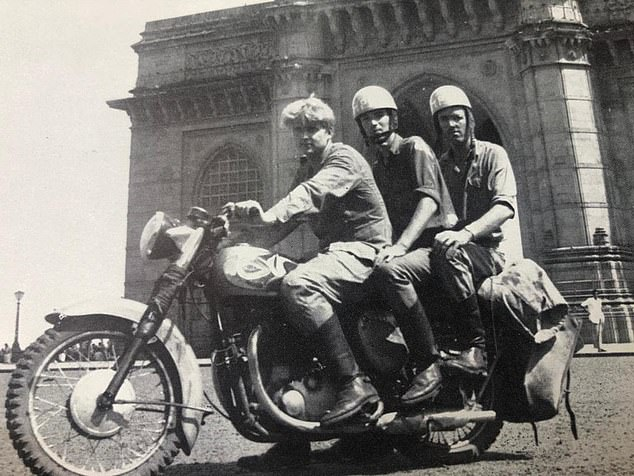 Stanley Johnson, Tim Severin and Michael de Larrabeiti (left to right) at the gateway of India, Mumbai, on a BSA 500cc shooting star motorbike in September 1961 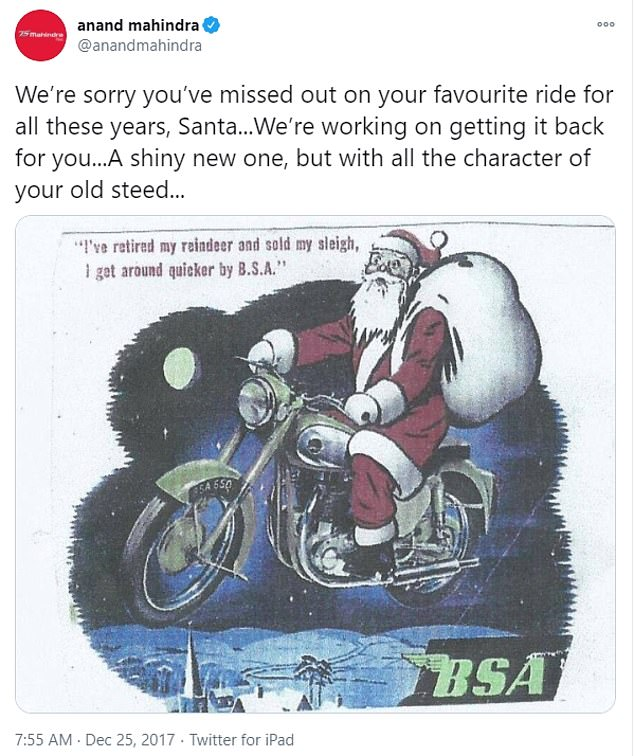 The first production will be of classic fossil-fuel burning bikes, but by the end of 2021 Mr Mahindra hopes that BSA electric bikes could hit roads.

Mr Mahindra told the newspaper: 'The UK was the leader in bikes right from the start,'

'That provenance is something that we really want to retain.'

Anand Mahindra has an estimated wealth of $1.7billion (£1.3bn), according to Forbes magazine.

It is not the first time that the billionaire, who made his fortune through the vehicle maker, has promised to bring back the brand after buying BSA Company Limited in October 2016.

The iconic British motorcycle brand could be resurrected from next year after Mahindra Group bought the rights to its name last week. Pictured: BSA Sloper, 500cc single-cylinder, 1927

On Christmas Day in 2017 he tweeted a picture of Father Christmas on a BSA bike, writing: 'We're sorry you've missed out on your favourite ride for all these years, Santa...We're working on getting it back for you...A shiny new one, but with all the character of your old steed.'

And on Monday the billionaire tweeted that the new venture would 'do justice' to the history of BSA motorbikes.

The UK government has awarded the BSA Company a £4.6million grant to develop electric bikes, in the hope of creating at least 255 jobs in and around Oxfordshire.

The new BSA bikes with traditional engines will cost between £5,000 and £10,000, the Guardian reported.

Pat Booth, actress and model, sitting on her BSA Starfire 250cc motorbike
The company is wary about being hit with tariffs after Brexit.

It believes that it can tap into the desire that people will have to travel when lockdown finally ends.

It hopes to build a new factory close to the old Small Heath site.

The history of Birmingham Small Arms (BSA)
BSA, which stands for Birmingham Small Arms, was founded in 1861 to manufacture guns - a reference fans of BBC drama Peaky Blinders will be familiar with.
Following the second world war, the Midlands munitions factory in Small Heath in the south-east district of Birmingham became a motorcycle assembly line.
For many years BSA was Birmingham's largest employer and by the end of World War Two the manufacturer employed 28,000 workers and controlled 67 factories.

+12
The Birmingham Small Arms factory, Small Heath, Birmingham, February 1917. Men and women working on the machines in machine shop number one during the First World War, producing rifles, Lewis guns, shells and military vehicles
The company’s Small Heath factory played a major role in armament production during World War One and went on to manufacture more than half of the guns used by British forces during the Second World War.

+12
The workforce at BSA in Small Heath Birmingham pour out of the factory gates at the beginning of their four day Easter break, 14th April 1949

+12
BSA Bicycle assembly line in Small Heath 30th April 1935
After the war BSA went on to lead the world in Motorcycle manufacture.

In 1948, BSA launched the legendary Bantam, which went on to sell more than 250,000 examples. It also launched successful models including the Gold Star and A10 Rocket Gold Star.

In 1951, it bought out rival British motorcycle brand, Triumph.

The combined production output of the two marques made BSA the world’s largest motorcycle producer at the time.

+12
The Bantam is the British manufacturers most famous product, selling over a quarter of a million examples after launching the model after the second world war

+12
The Bantam used a small-capacity single cylinder engine. More than 250,000 were sold
However, poor management and bad investments saw the company slip shortly after, and - like many UK businesses - it was crippled by the recession at the turn of the 1970s.

A government rescue plan in 1972 saw BSA merged with Norton-Villiers to create Norton-Villiers-Triumph (NVT), which lasted just six years before it was eventually liquidated.

The last BSA motorcycle was produced in 1973.

Top ten things you might not have known about BSA...

With BSA being confirmed as making a comeback, we thought we'd provide you with some pub trivia... for when the pubs actually open!