The Elephant Festival 2017, in Sayaboury province, will run from 13 to 19 February.

Lao News Agency reported the official opening ceremony will be held, 17 February, with around 70 elephants joining activities during the festival. The Festival draws a significance of the endangered Asian elephants which has an essential part of Lao people's heritage, culture, agriculture and livelihood.

The celebration takes place at the Sayabouly Province during the month of mid-February. More than 80,000 local and international people gather together and experience the procession of the thousands of elephants. Before the day of the festivals, these elephants underwent on their own make over to look blooming and fresh during the parade. These elephants are blessed by the monks through a back ceremony. Tons of entertainments such as pachyderm, musical plays, dance performances, films and fireworks displays. The most awaited part of the festival is the crowning of the "Elephant of the Year" award.

The annual Elephant Festival has been scheduled to take place on February 16-22 in the northwestern province Xayaboury. The provincial authorities confirmed last week their readiness to host the weeklong event. Elephant Festival aims to promote the fine traditional customs of Lao people, tourism and the reservation of elephants, according to Director of Xayaboury Provincial Department of Information, Culture and Tourism, Mrs. Sengchanh Vannachith. 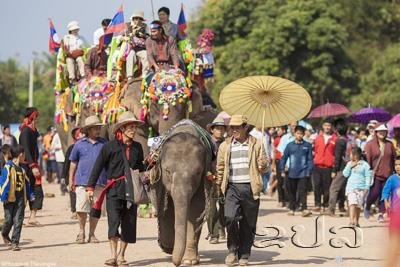 ​
In cooperation with ElefantAsia, Xayaboury Province hosted for the first time Elephant Festival in Hongsa district in 2007. Since then the festival has been celebrated annually. The hosting of this event rotates between Hongsa, Paklay and Xayaboury districts. ElefantAsia, founded by Sébastien Duffillot and Gilles Maurer in 2001, is dedicated to the global conservation and protection of the endangered Asian elephant.