The Ulysses Club Thailand ride this week is a Pai Loop - tomorrow, Feb 12 if anyone would like to join us.

Leaving from Rider's Corner (NE Corner, inside the moat - Old City) at 9am. Please come already fueled up. If you need a coffee injection or a cheap brekkie beforehand (Vietnamese rolls from 15 baht, etc) - or even a full English brekkie, Tum's cafe is open from 6am these days.

We will re-group at the PTT on Canal Rd, 500 metres or so south of the Suthep Rd intersection, then flick right at the lights adjacent to the PTT to avoid the construction and take the bypass out to the 1269. If anyone from north of town wants to do the 1096 part of the Samoeng Loop, we will collect anyone waiting in Samoeng at the T intersection where the 1269 ends. Anyone wanting to meet us in Samoeng, please plan to be there by 9:50. We will swing through there pretty close to 10am if our schedule holds - and if there's bikes there, will stop. First coffee stop is the "brownies" cafe about 25km past Samoeng. We will also stop at a couple of viewpoints along the way. Deere, from Rider's Corner and myself will alternate Ride Lead and Sweep duties and mark the corners.

Some may wish to stay over in Pai for Chinese New Year. There's another group comprising mostly Ulysses Club members who will be riding in to Pai on Saturday from Mae Hong Son to enjoy whatever Chinese New Year may bring in Pai, so if anyone wants to stay over, there's at least five more who will be in town (we were there mid last week - town was rather empty).

Six of us went. Good ride.

We had to shuffle a couple of CRFs out with some riders from Bangkok... who were headed the same way, but we didn't run into them again after brekkie. They did the new Jok thing that Tum and Aoy are doing. Call it a Covid initiative. Restaurants in town are dead and dying at a rapid rate. We're trying our best to survive. 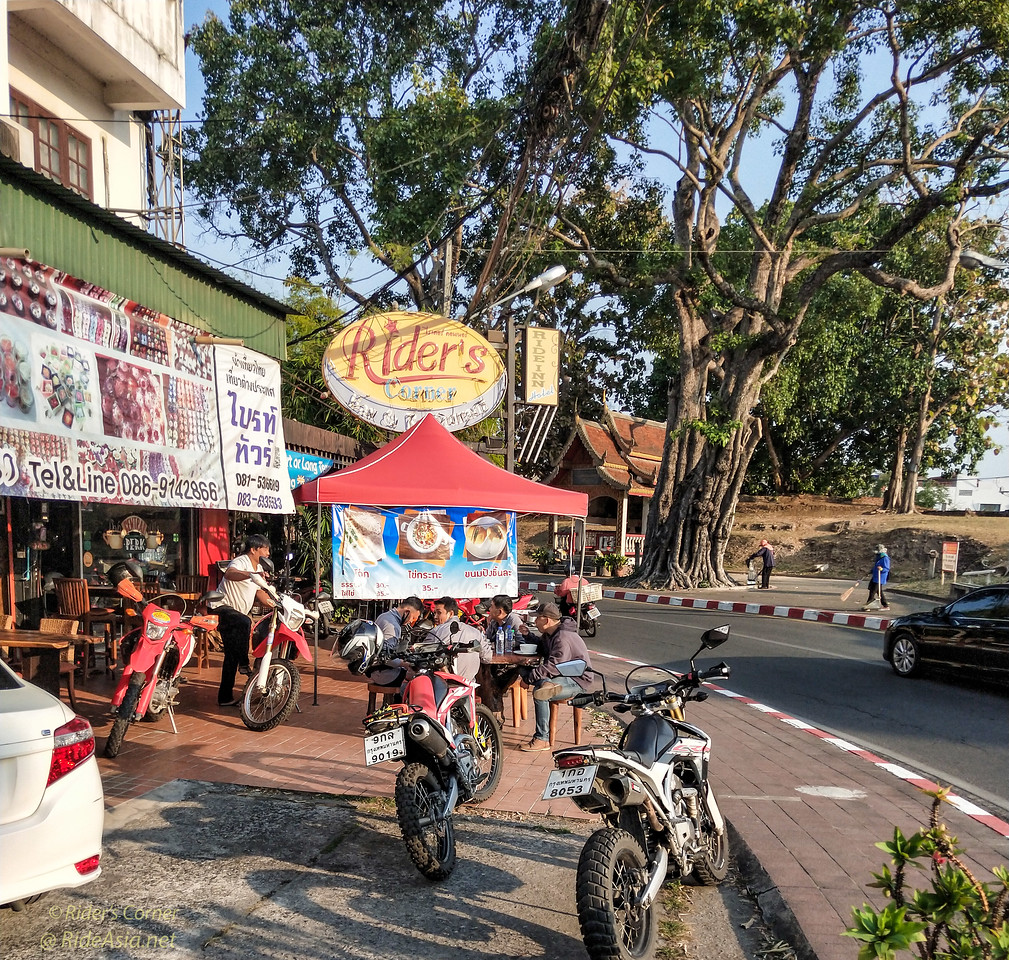 Deere seemed to forget we were on street bikes this week... and took the dirt shortcut 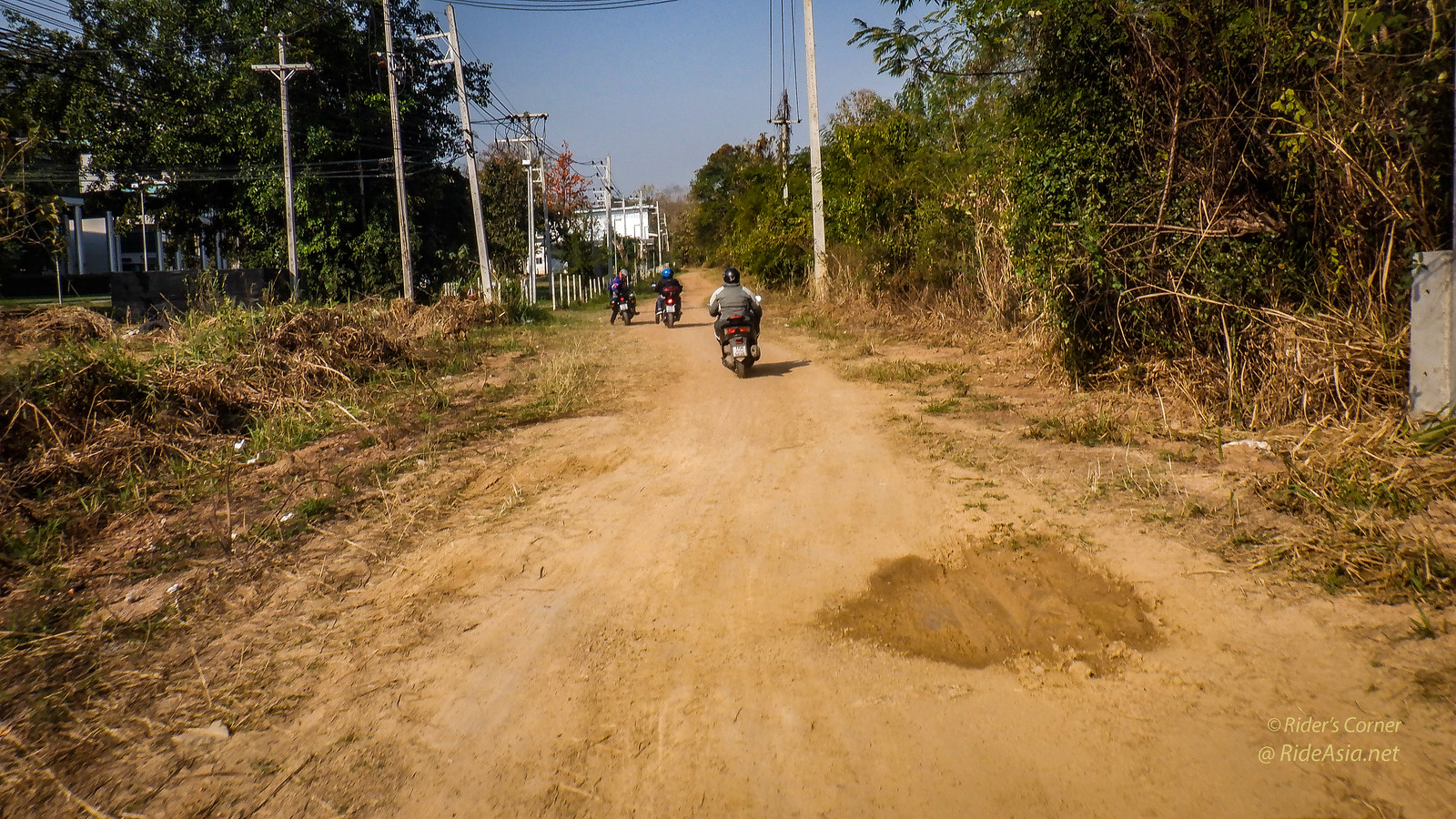 No biggie... this lot know their way around two wheels

Passed a Goldie on the loop and saw him again later... he was heading back into Pai on the 1095 - gave us a wave

A two-elephant ride today. One was at the usual stall on the Samoeng Loop... and the other one was headed there 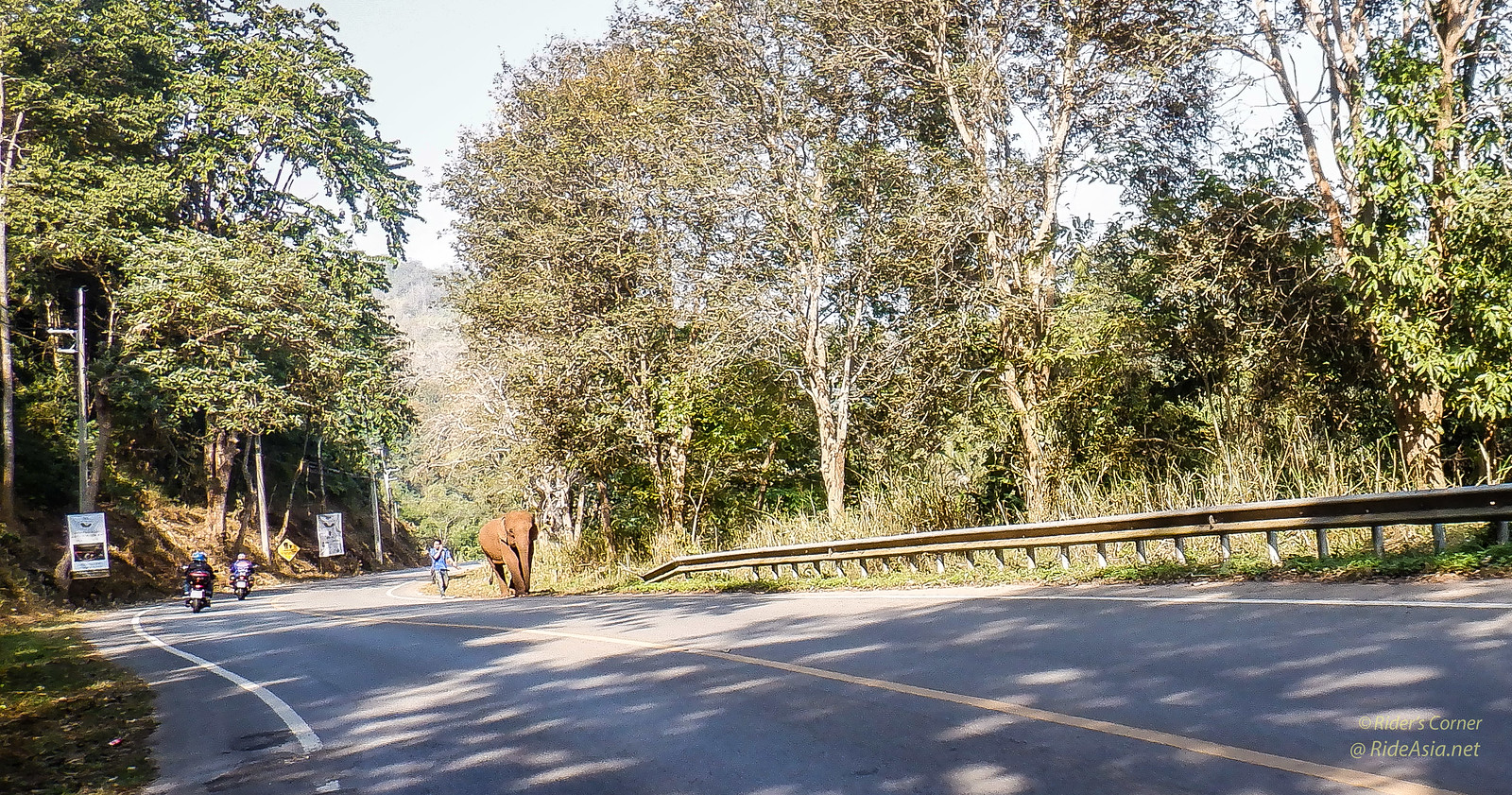 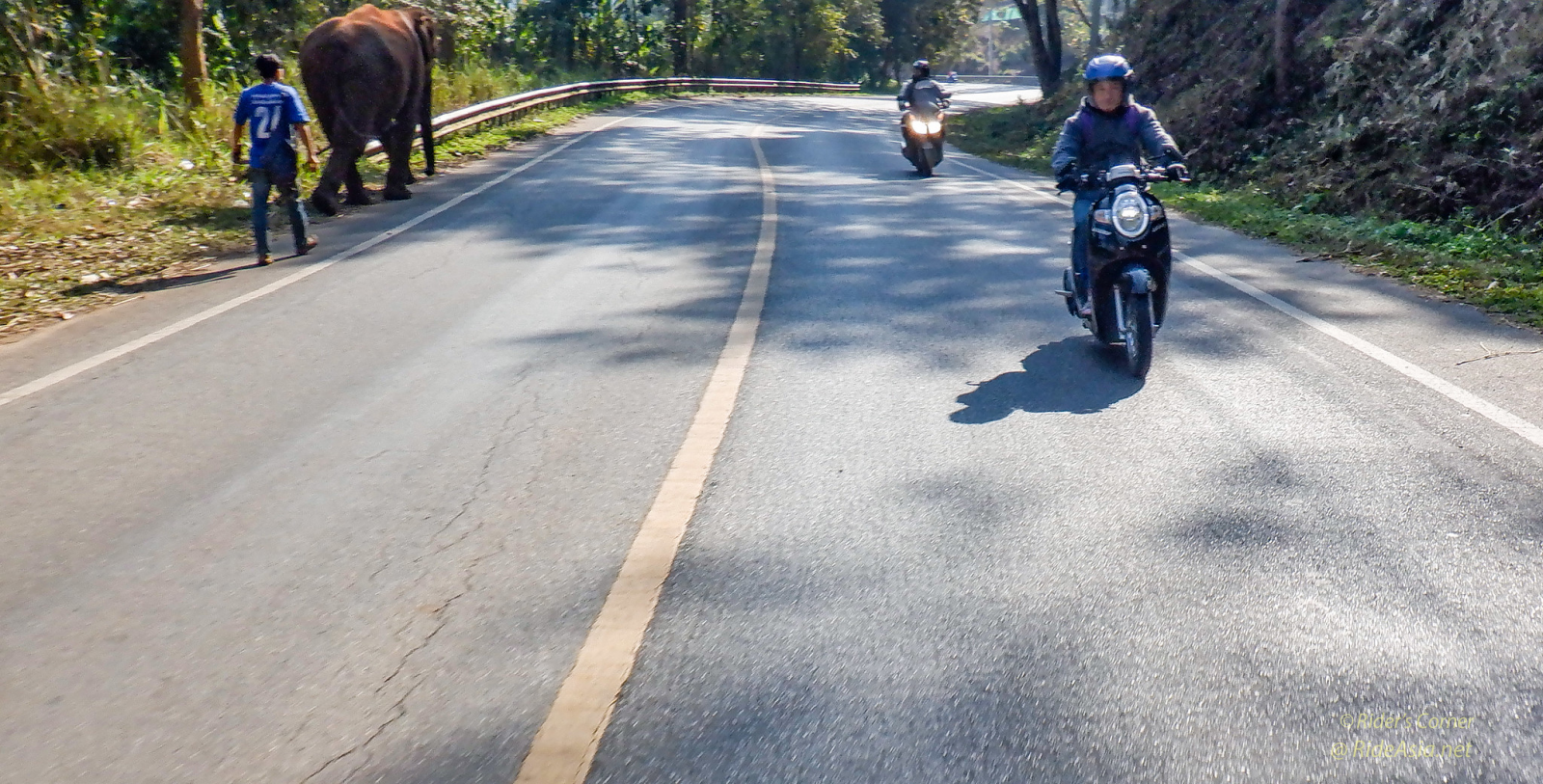 Stopped for a brownie.... and another coffee (I'd been up since 2:20am and was riding like an old grandpa) 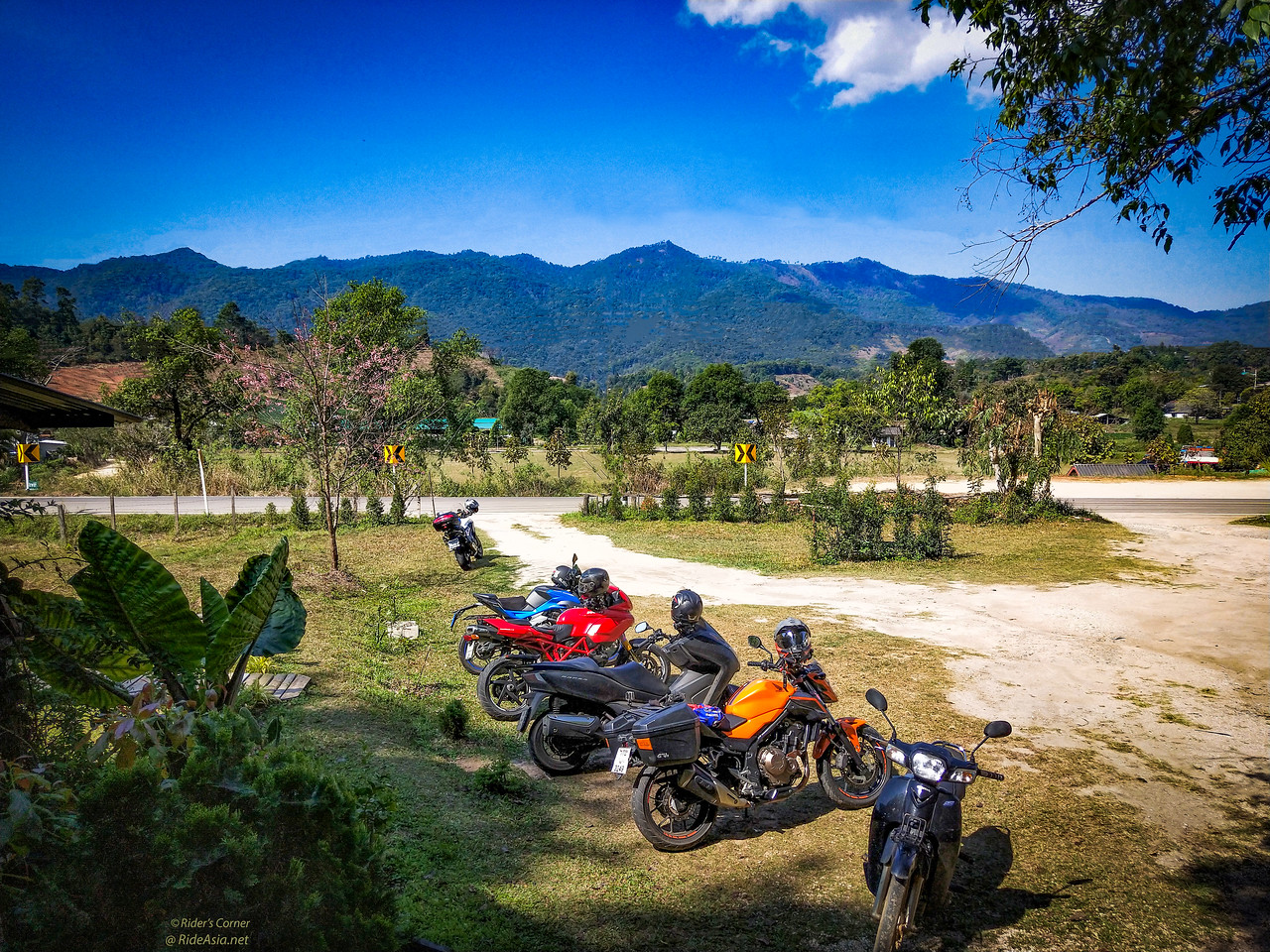 Obligatory stop at the viewpoint. Deere got some video footage from the swing... but he's having a night off in Pai (as are Lachie and Ow) Not sure exactly what it is with this lady... but she has some charisma that I like. She's always got a smile for us 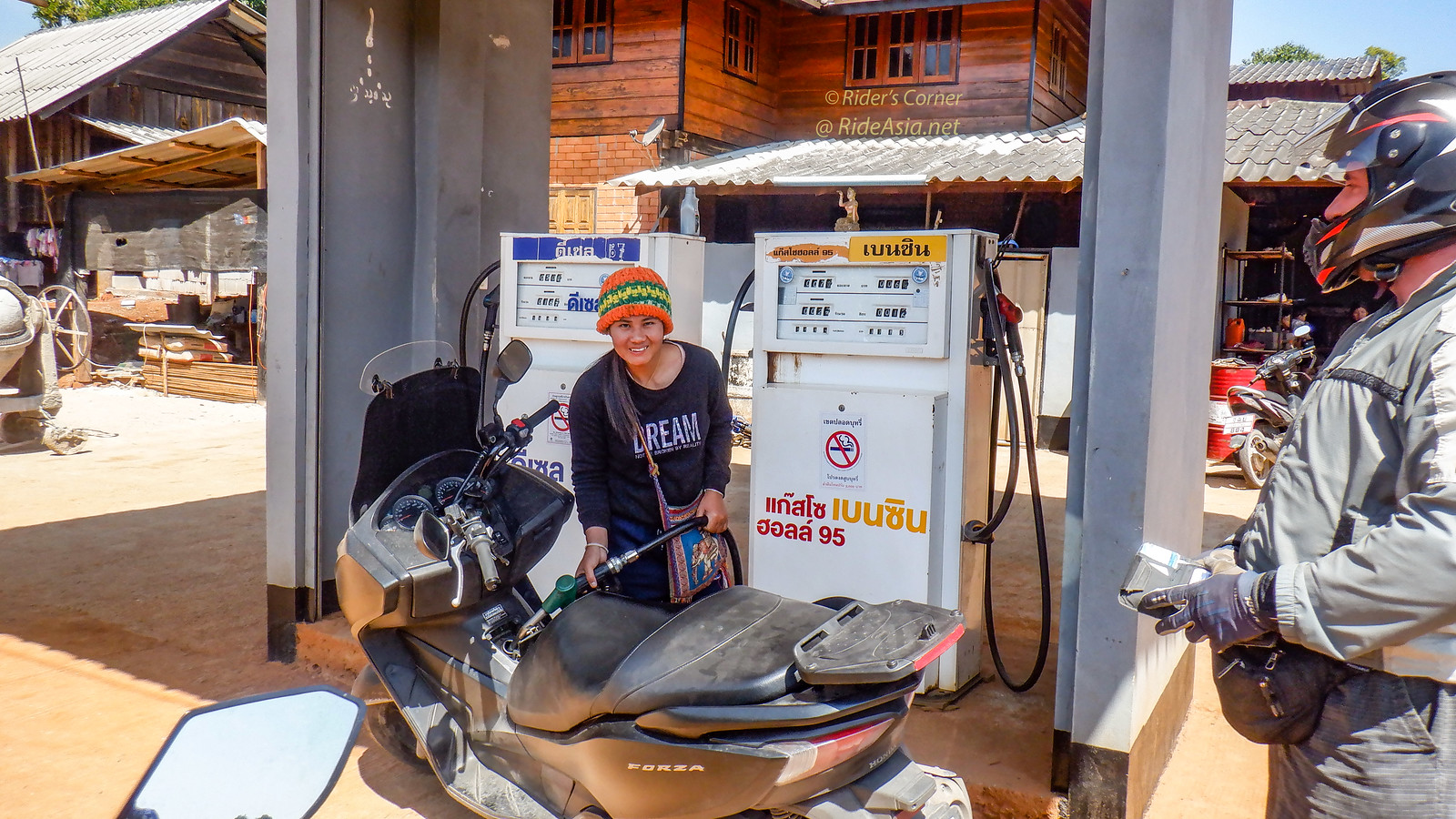 There's some chopped up road between there and Wat Chan, but if that bothers you, move to Germany and stick to the Autobahns... or try the freeways somewhere else 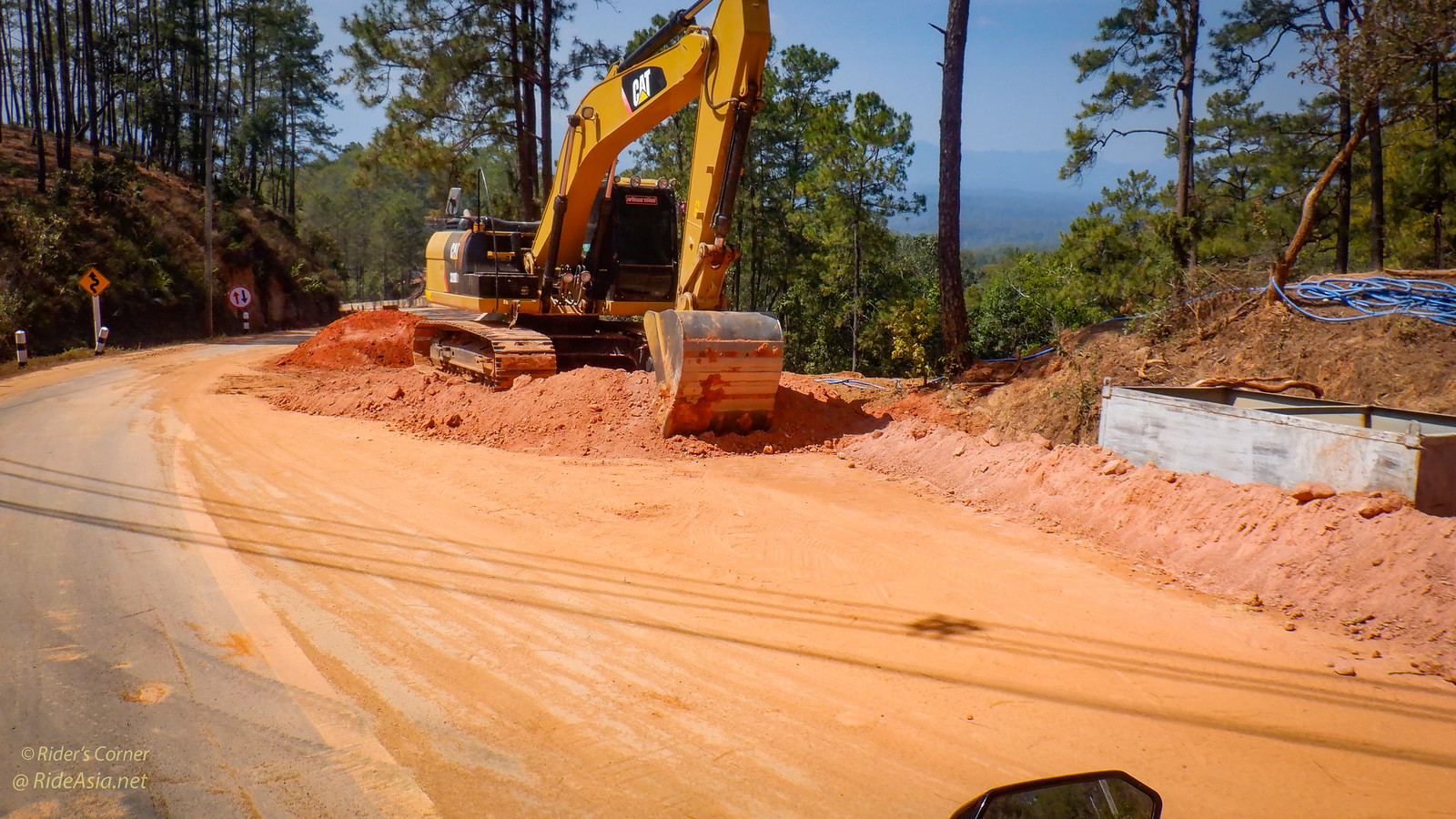 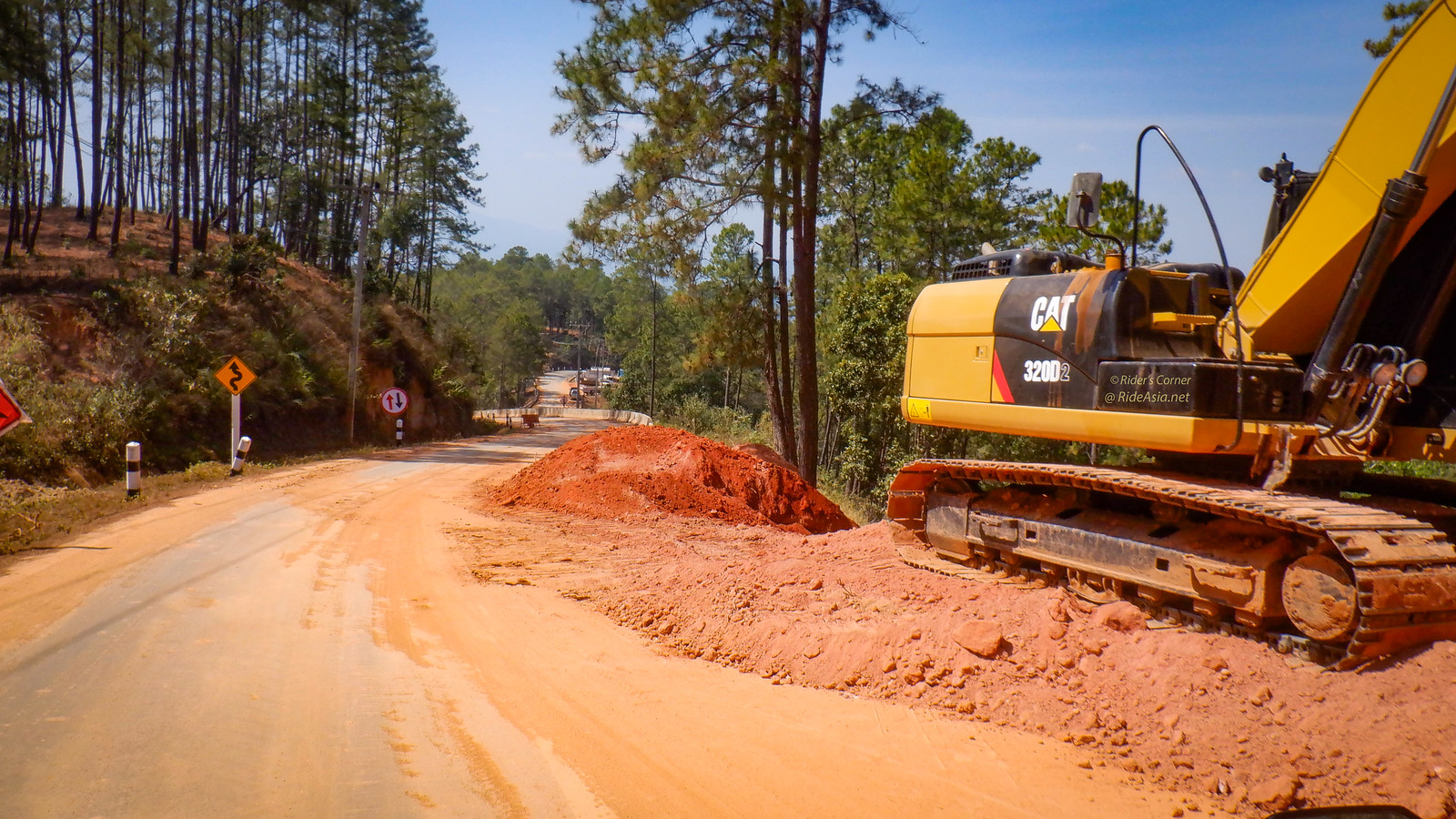 Neil, on the Forza, bounced me into a corner not long after that. Cheeky bugger. I had to crack the throttle a bit then. Anyhow, I managed to stay in front and we went into the Mueang Paeng hot springs, on the "maze" road. Doing the now obligatory Thai point. It's 94 degrees C, in case you missed it. Lachie and Ow savoured the reminders of Rotorua. 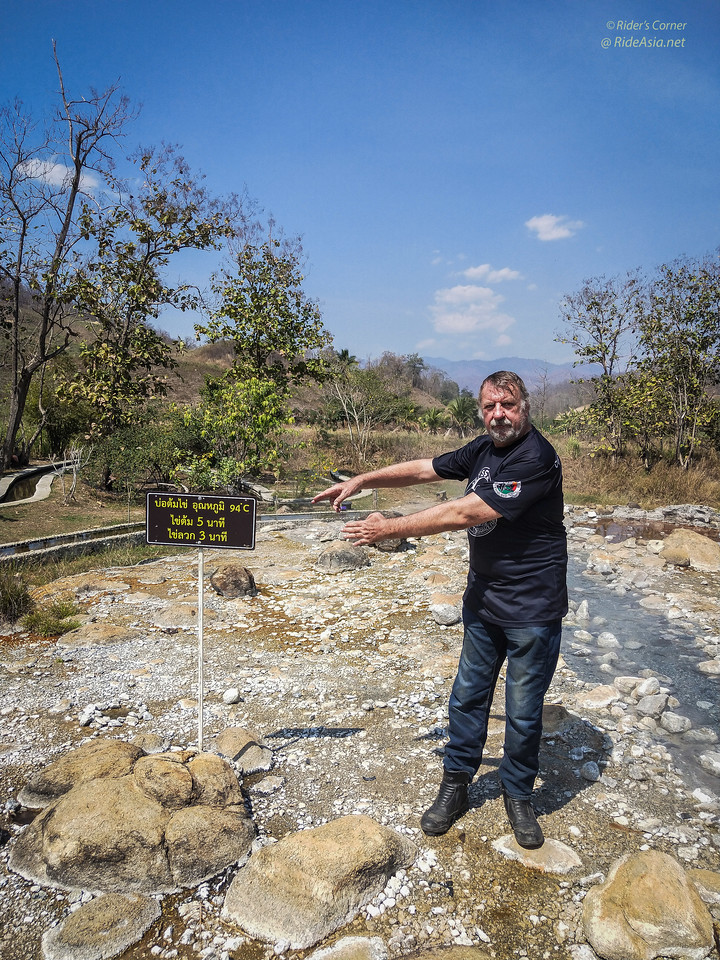 We didn't hang around to soak the feet this time, as Adam wanted to get back 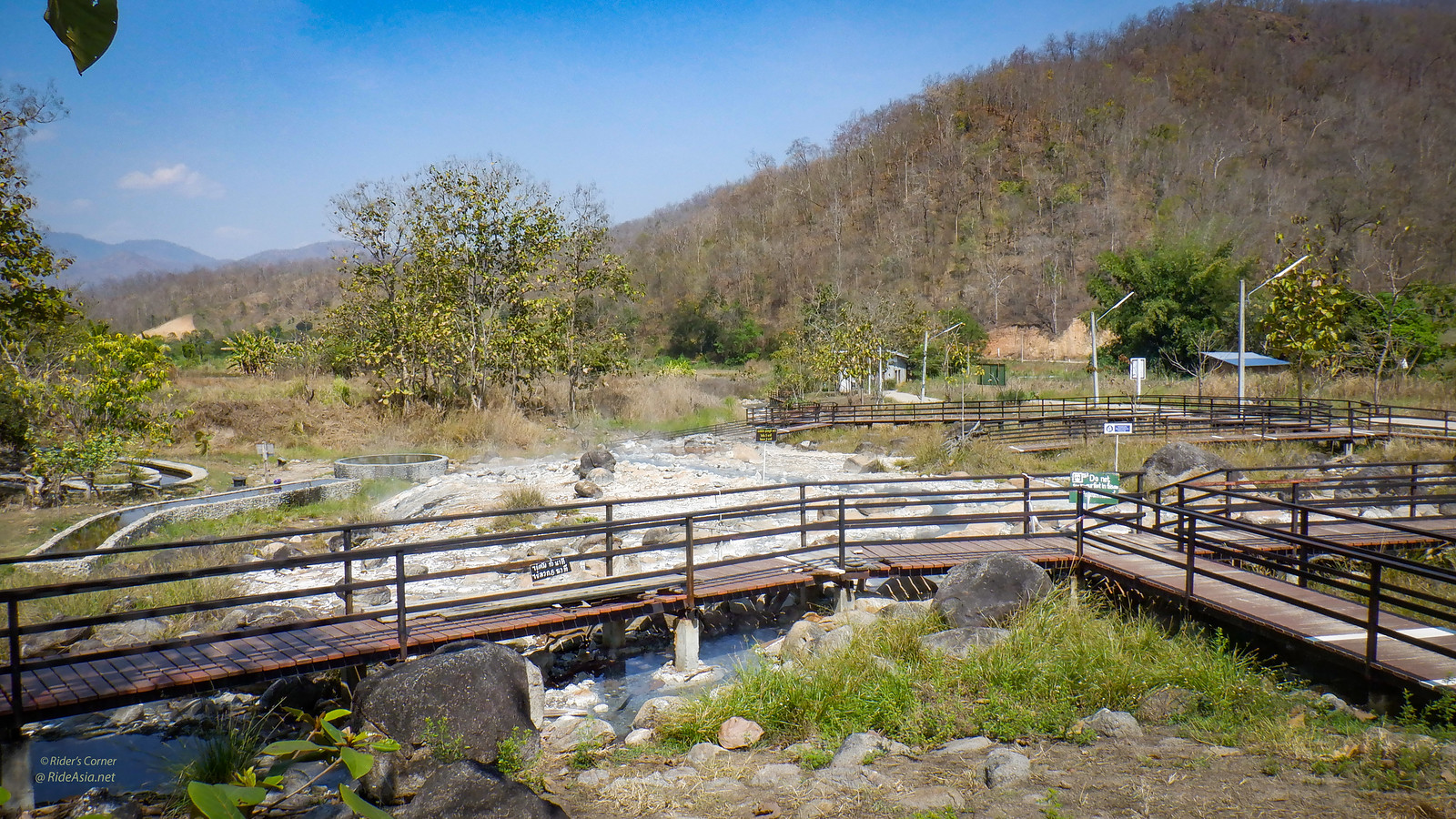 It was into Pai and a 2pm lunch at Charlie and Lek's. I highly recommend the No. 22 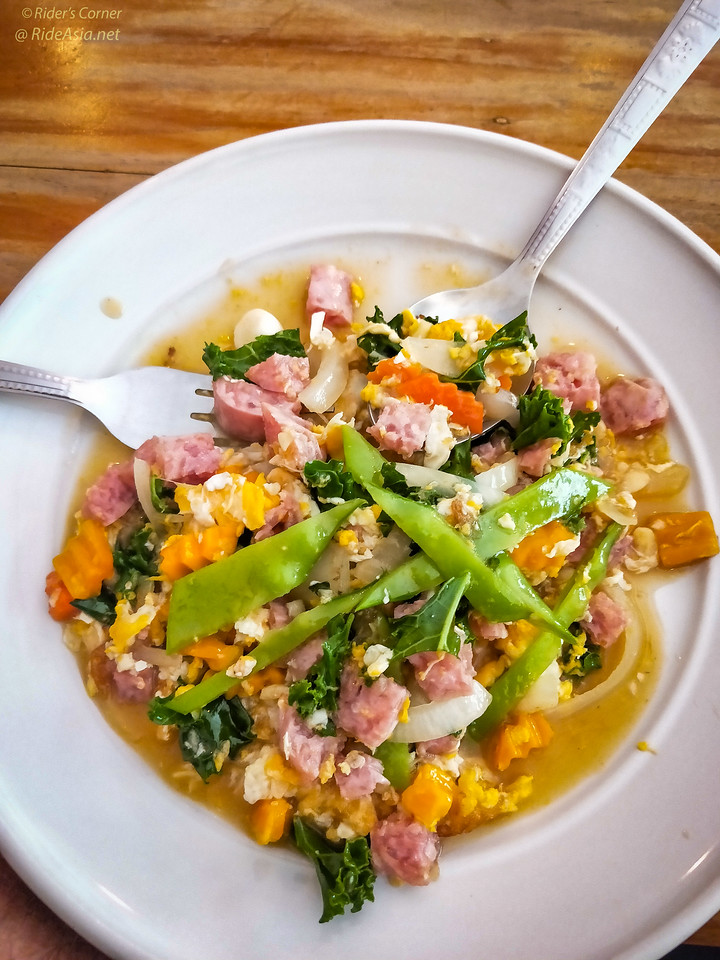 Neil and I fueled up... and it was a blast for the two of us down the 1095. Adam had skipped lunch. Deere, Lachie and Ow stayed to sample the joys of Chinese New Year in Pai. There's another group of Ulysses members headed there tomorrow - they're overnighting in MHS tonight.... but I don't think they'll catch up. 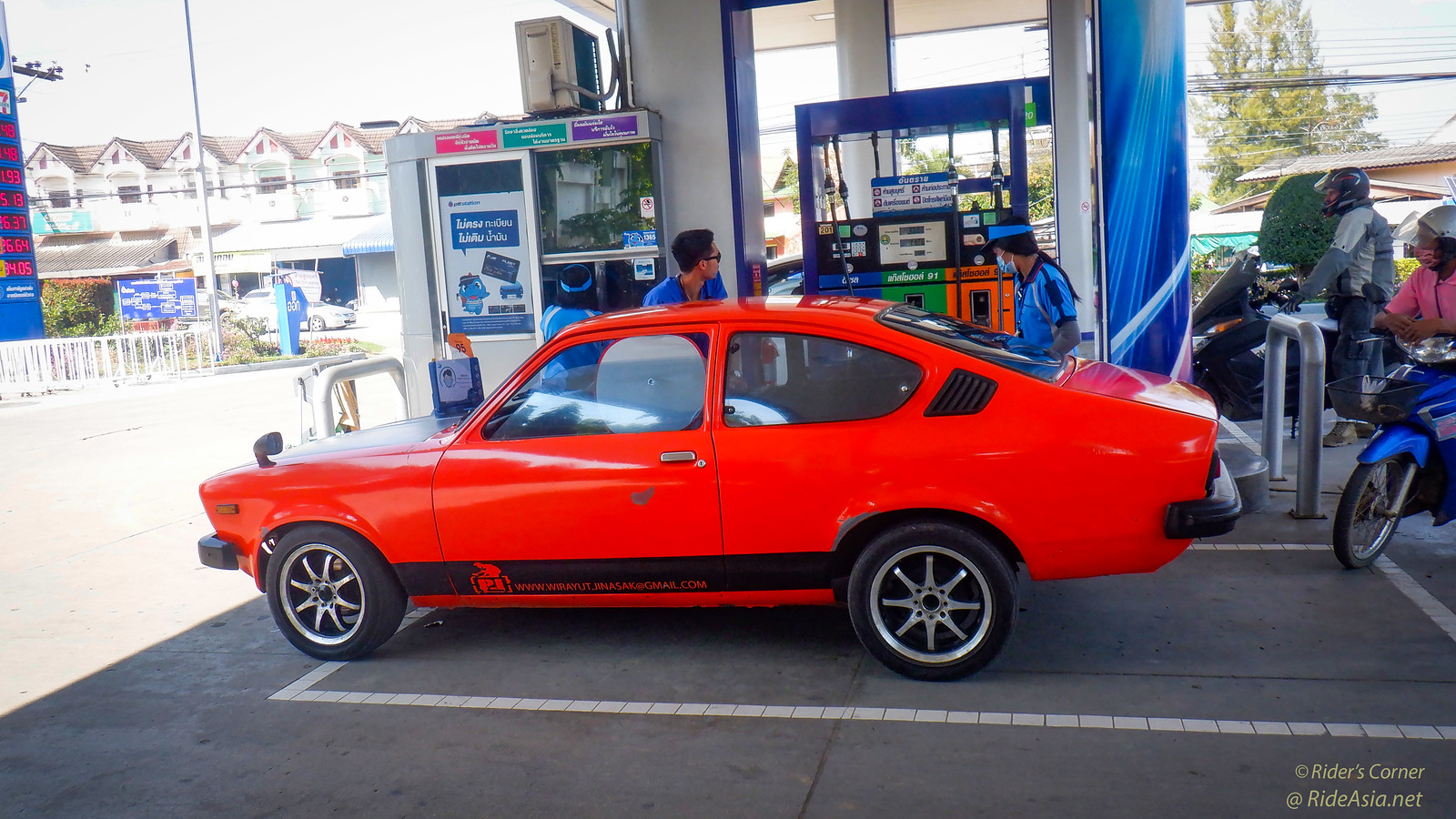 Neil led up the hill out of Pai, but pulled up about 20 km out to see how his tyre pressures were. I assured him I'd been sliding too... and then I led off. Bloody hard work staying in front of him. I eventually waved him past again around the Cafe 32 mark... and enjoyed watching his smooth style from a safe distance. We diverged at the Airbus... and I came home via the Canal Rd, as usual. I hate that Mae Rim snarl. 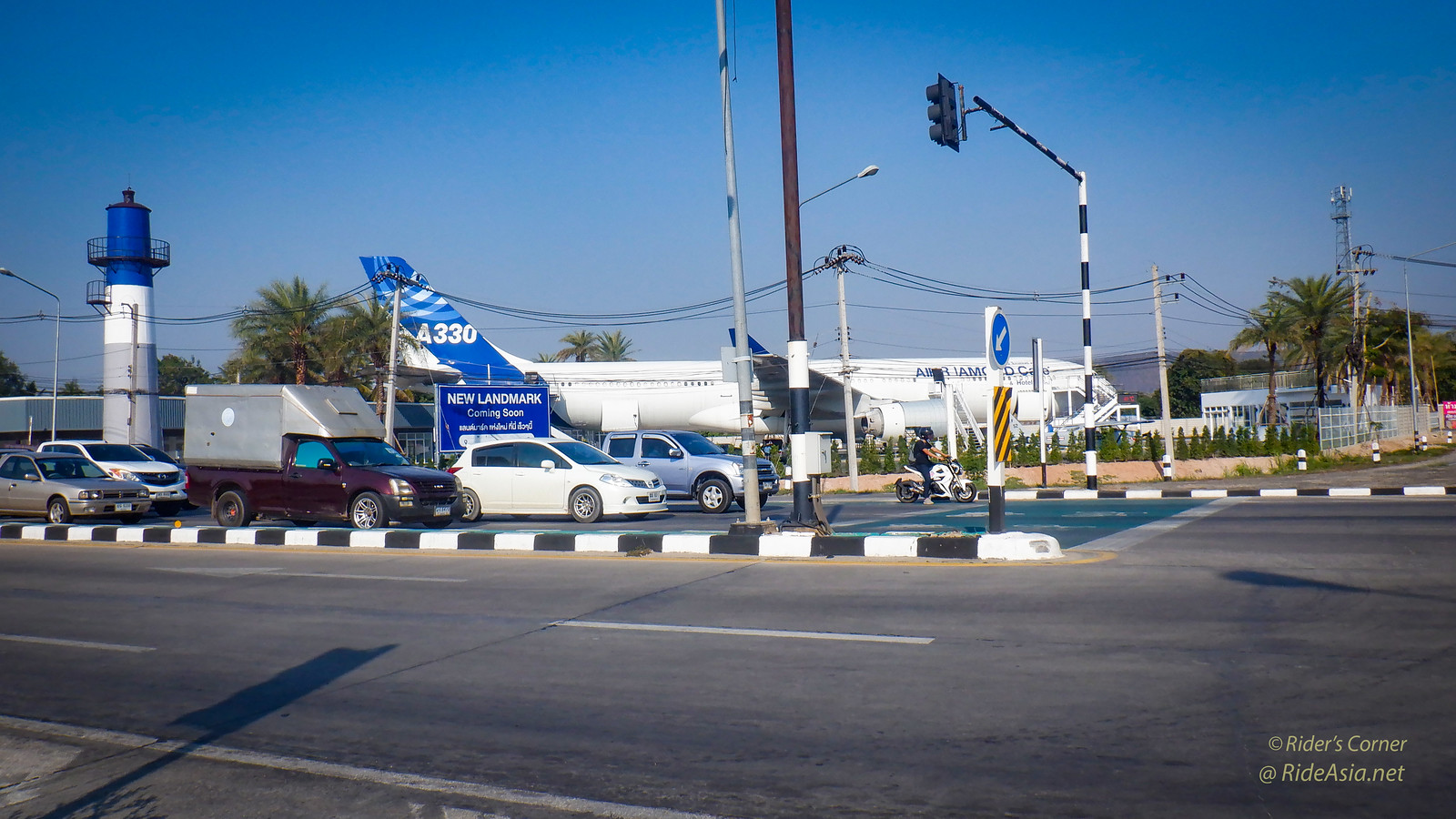 So... 330 km, thereabouts. Seven and a half hours including stops. Arms like jelly from mashing the brakes to stay in front of a bloody scooter. I'd have enjoyed the ride far more if I'd taken the CRF Rally. The Ducati was in its element for about a quarter of that ride. Oh yeah... I'm fairly sure a few guys who had a Forza with a big bloke on it blast past them today got a bit of a shock.... however, as always, we rode with a lead and a sweep and no-one got left behind.
You must log in or register to reply here.
Share:
Facebook Twitter Reddit Pinterest Tumblr WhatsApp Email Share Link
Top Bottom