Not a motorcycle, converting my old mountain bike to electric, rainy season project

During this year rainy season I decided converting my old (and little used) Giant mountain bike, which I brought over from Holland, with a Bafang 750W crank mounted electric motor and a 48V Samsung lithium battery. In future this will hook up with a solar panel experiment and maybe a small DYI power wall.

Their communication (in English) via messenger is excellent! For example Ebikr did not recommend the (more expensive) 1000 watt Bafang unit due to strength issues with my bike having a 68mm crank bracket, fat tire bikes have a 100mm bracket which is suitable for a 1000 watt motor.

After ordering the kit arrived from Bangkok very quick and all components are indeed there, like the (conventional bowden cable) brake levers with the engine cut out switches.

I have been working on the bike on and off for a few days now, the battery is on as are the throttle, the screen with control panel but the motor is still on the ground.

Progress slows down now as I need a crank removal- and chain splitting tool so I can remove the original crank and front derailleur after which I can mount the motor in the crank bracket.

I will test it without the switched brake levers first, if needed I will mount these too but I do prefer the original levers......
Also the test will be without the gear shift sensor as this was not included in the kit, it's something I will add later. This will be interesting. Been intrigued with some of the ebikes and also overwhelmed with all the choices, hub drive, gear drive, watts etc. Thanks for the links, will check them out.

Nice Giant, looks in great shape for the age.

I can lend you a crank extractor and chain tool if you need, pm. But any LA Cycle or similar will remove them for 50 - 100 Baht.

Marcusb, thanks for the comments, I will send you a PM with some off forum info. I ordered a set of bike tools so I can do more bike work myself.

There is a large choice in ready built ebikes and conversions, if you have a bike you like conversion is a good idea but if you need to buy a new bike plus conversion kit you are better off buying a ready built. It all depends what you want to do with it.

For ready build I like the Frey full suspension, they have a Bafang motor same as my kit motor FREY.BIKE

The Giant was serviced a year ago at Northern Bike in Chiang Rai, I hope the rim brakes are strong enough even with the new pads, as this is a pre V brake/disc brake bike.........
M

yes, the canti brakes were the second thing that caught my eye. First was the super long steerer tube- You must be well over 6 feet ! !

Thanks for the links, I'll reciprocate with a link for the best canti pads I ever used, they've gotten a bit pricier than in 1993!

looking forward to reading more about your conversion, results, and satisfaction.

I was away for a week, so this week will proceed with removing the crankshaft, the tool is in the kit but it seems that some force is required to undo it. So I will soak the crank threats in WD40 a few days to see if the threads come undone more easily.

I have also decided after some initial testing to change the kit screen with a device from the UK called Egg Rider V2 EggRider V2 | E-bike display with Android and iPhone app
The Egg Rider system will give me much more flexibility to fiddle around with the motor controller settings.
I can just use my mobile phone on the fly instead of hooking it up with a laptop at the workshop.

Actually the crankshaft came out just OK, it took just an hour to soak with WD40.
Here is the e-motor in place, chain mounted and front derailleur removed, the electric cables just installed for testing. And, the screen fires up and the rear wheel spins. From right to left, the screen, on/off and motorpower +/- switch and thumb push throttle.

Next job is installing the speed-sensor on the rear wheel, provisionally tape all the cables to the frame, tighten all nuts and bolts one more time and a testdrive.
Last edited: Jun 26, 2019

Taped up, ready for some testing: 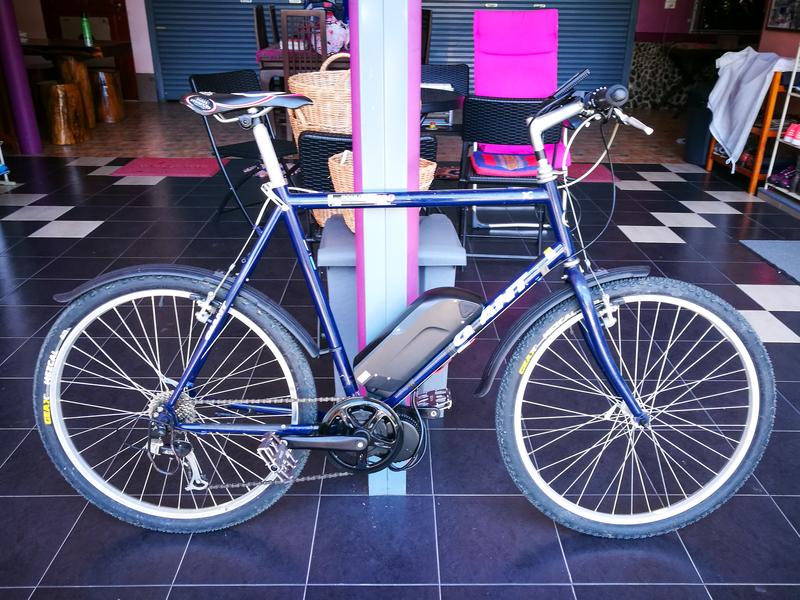 Well it would appear your rainy season projectt is almost done before the rains even start.

Halfway there, it's not water proof yet
By the way, did some "burn out's" in the driveway, it's fast.....

I have been away a couple of weeks and after my return did some more work on the bike.
The brake levers with cut off switch are on the bike now, they cut the electric power to the motor when the lever is pulled.

Also, the original kit screen didn't allow easy motor programming, it requires a special cable and a computer.
In the original set up the throttle was more of an (full)on-off switch and didn't allow for decent speed control.

With the Eggrider system the programming is much easier, it connects to my phone with bluetooth and allows motor programming on the fly.
Now the throttle is much smoother, with the new Beta version of the app it's even possible to program motor torques at various pedal assist levels.

What is still to be tried out is the gear shift sensor and the new battery I ordered.

The original kit battery which is now mounted is a 36V 10.5 Ah battery, the new battery is a 48V 14.3 Ah battery, too bad the mounting plates with electric connectors are different. So when changing batteries I will need to switch out the entire mounting plate too.

One of the ideas I am playing with is hooking up the bike batteries with my solar project, so I also ordered a 48V 1500W plug in inverter which I will hook up to the new battery to test a bit

For people who are interested, EM3EV has a discount on the Bafang 750W kit, Bafang 48V 750W BBS02 Ebike Kit With Battery Pack Option (~1200W Max) | EM3ev
I ordered the new battery, Eggrider etc from EM3EV, they arranged delivery without me paying any tax!

In the mean time I have been buying some more e-bikes, both electric mountain bikes from a company called Frey. And for people who want to test a full suspension bike, here is our demo Frey M600, it has a 500w Bafang motor with 120Nm torque and is currently limited to 25km/h (EU regulations): That Orange Frey is really fast, almost 50km/h full throttle, it does pedal support too but throttle is more fun!