A bit more info for people who are interested in the history of Laos. In my post on "What to do and see in Luang Prabang" (Luang Prabang -things to see and do) I briefly mentioned the grave site of Henri Mouhot which is located quite close to Luang Prabang along the Nam Khan river. Recently when doing some research on other topics I happened to find some more sources of info on Henri Mouhot and what he did in Laos (as well as Thailand and Cambodia).

On 27 April 1858, Alexandre Henri Mouhot, aged 31, sailed from London to Bangkok with the aim of exploring the remote interior regions of mainland Southeast Asia. He was particularly interested in ornithology and conchology, but he also had a passion for philology, photography and foreign languages. For nearly three years, from 1858 until his death in Laos in 1861, Henri Mouhot explored the inner regions of Thailand (known as Siam at that time), Cambodia and Laos. His legacy is a detailed and unfinished diary of his keen observations of the places, people, animals, insects and shells of the region. Some of his notes are the earliest surviving records of previously uncharted areas. 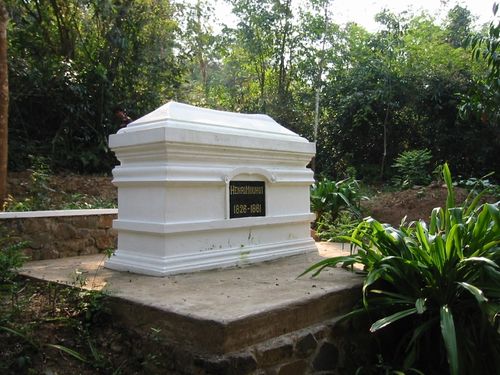 Travel document with the seal of the Mahadthai (Ministry of foreign affairs). British Library, Or.4736, f.17.

You can find more info on Henri Mouhot here:

In the footsteps of Henry Mouhot


There is also a video (a bit longish at over 10 minutes) about Mahout and the tomb at:

The French Forts and other military installations in Laos

In the past Laos was a protectorate of the French and it formed part of the French Colonial Empire in Southeast Asia. Laos consisted of much of the territory of the former kingdom of Lane Xang and was part of French Indochina from 1893 until it was granted self-rule within the French Union in 1946. The Franco-Lao Treaty of 1953 established Laos as an independent member of the French Union and under the Geneva Conference following France's withdrawal from Indochina after the First Indochina War, Laos was granted independence in 1954. Part of the history of the French in Laos can be seen in the form of the former military outposts like forts etc. The French army, in Lao language often called the "Falang" used the forts to protect the country from outsiders like the Thai as the latter often were squabbling with the French about ownership of parts of areas in what is now like the areas west of the Mekong (Xayaboury and Champasak), etc. The expansion of French Indochina (in blue) - Source: Wikipedia - https://en.wikipedia.org/wiki/French_Indochina 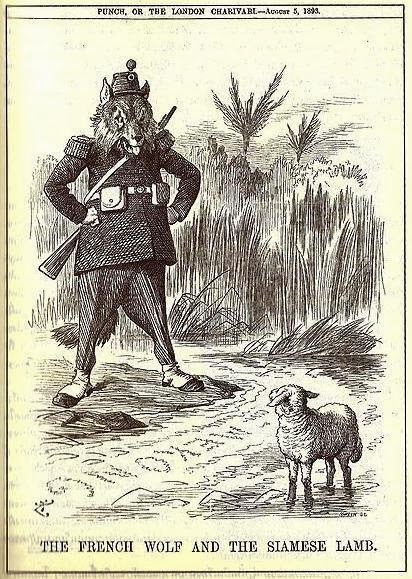 While generally only two forts are being mentioned in the literature as still existing in Laos (Fort Carnot in Houayxay and the fort in Mueang Sing), in fact there are a few more although most of these are only in the form of a few parts of the buildings still standing. These consist of Fort Kai Falang in Boun Tai (now used by the District Department of Culture, Information and Tourism) and the remnants (gate and watch-tower) in Thakhaek. There might be more "left-overs" of the French time but these are the ones I have seen and visited myself. Another building mentioned in the literature or on websites is a military base in Luang Namtha (south of the airport) which in 1954 saw an attack by the the communist led Vietminh, the French Officers Club in Vientiane (now demolished for as far as I know), The Xeno (Seno)Military Airbase in Savannakhet (now a Lao military base and off limits to outsiders), the French Military Cemetery in Vientiane, etc. 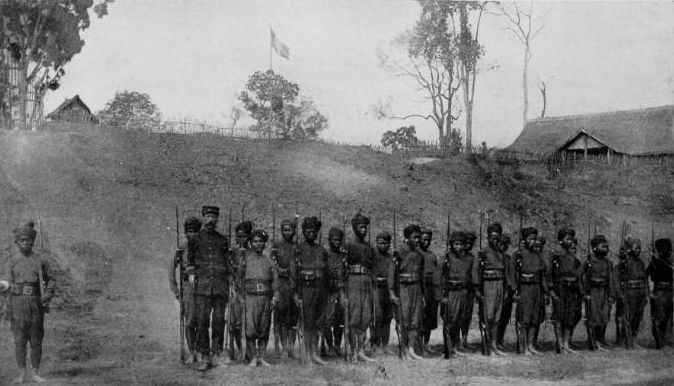 Fort Carnot - Houayxay
Within the town of Houayxay you can explore Fort Carnot, a French garrison which is still in reasonable good condition (N20.27205 E100.41521) although at present it looks like that it slowly slides back to its old and dilapidated shape. Fort Carnot was constructed by the French colonial authorities around 1900 in order to monitor the river and border areas and for that reason it was positioned on a hilltop from where you can overlook the Mekong, the town as well as part of Thailand.

Still intact are two watch towers, a kitchen and prison cell, and tunnels leading to external guard houses. Off limits to foreign tourists up until very recently as it was still being used by the Lao army, the site is a picturesque relic of the region's turbulent history. The north block of the fort which is thought to have been the kitchen and jail, has been developed into a museum but due to budgetary and manpower problems of the Tourism Department of Bokeo Province, the museum as well as the fort are now again closed. 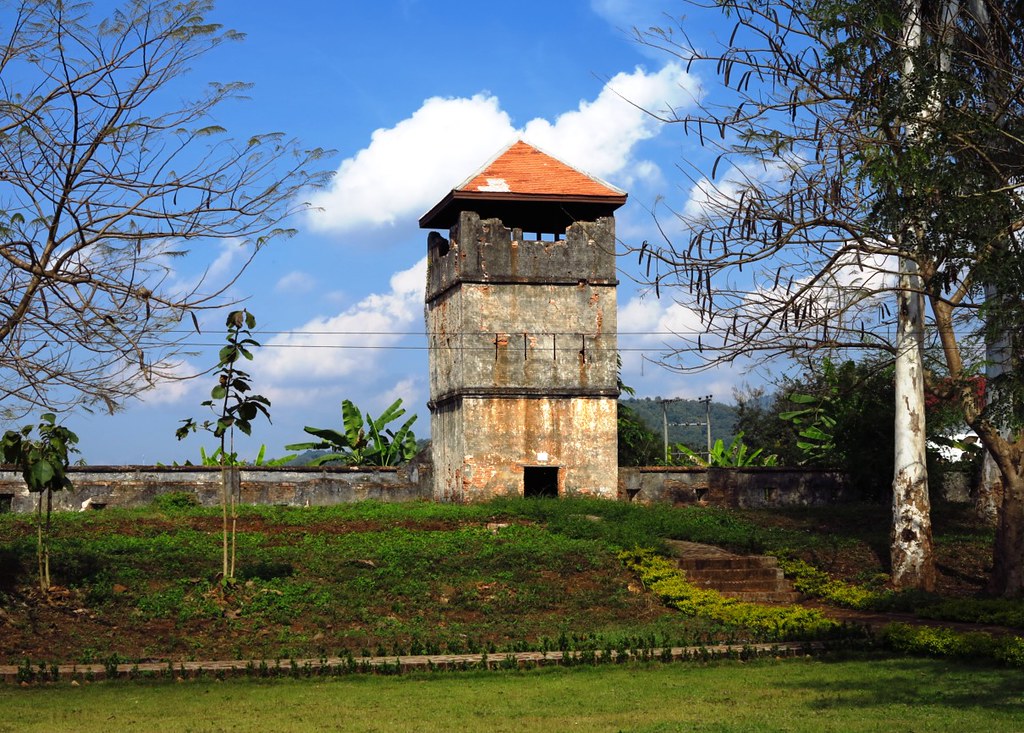 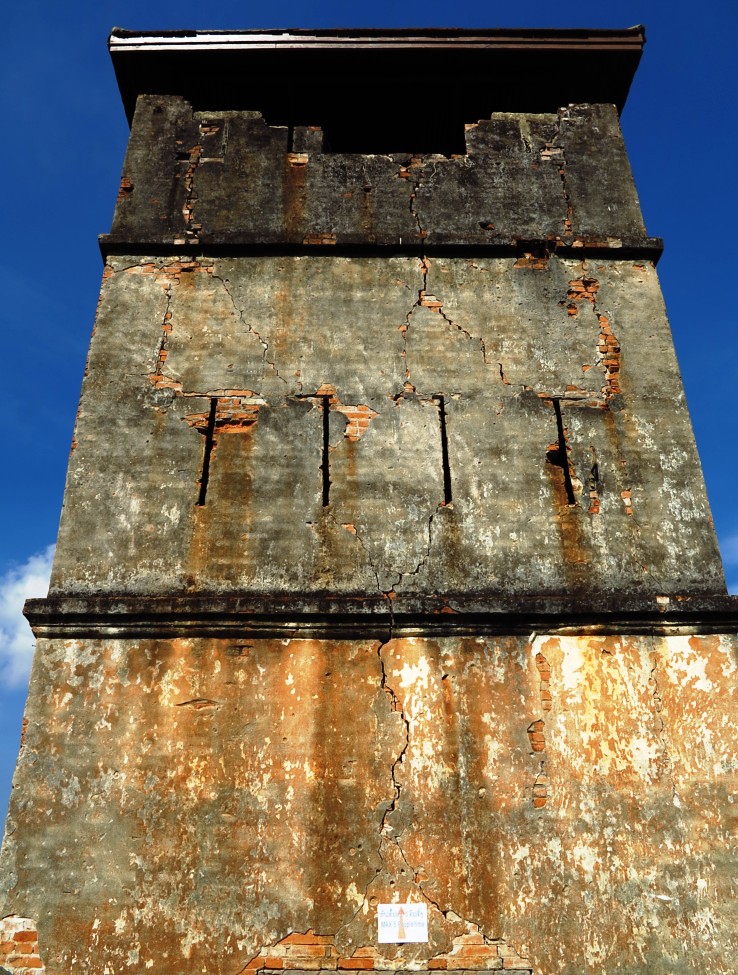 The building at Fort Carnot which houses the Museum

Fort in Mueang Sing
Mueang Sing is home to the other more well-known French Forts in Laos. The fort, located at N21.18829 E101.14824 behind the police station, is now occupied by the Lao army. It is/was off-limit to foreigners who also should refrain from taking photographs of the old buildings. Apparently the old Fort buildings are now (2015) open for tourists according to http://www.muangsingtravel.com/ms_info/History_of_Old_Falangs_Trail.html

The same soure (http://www.muangsingtravel.com/activities/trekking_namha/2_day_falang_trail.html) indicates that you can now also make a trek from Mueang Sing to Luang Namtha following the "Falang Trail" which was used by the French army while travelling from Mueang Sing to Luang Namtha and Houayxay. However, after the Lao People's Democratic Republic was established in 1975, the "Falang Trail" came under Laos government control and they closed the trail. Now, some 50 years later the Laos government has agreed to open the trail for trekking 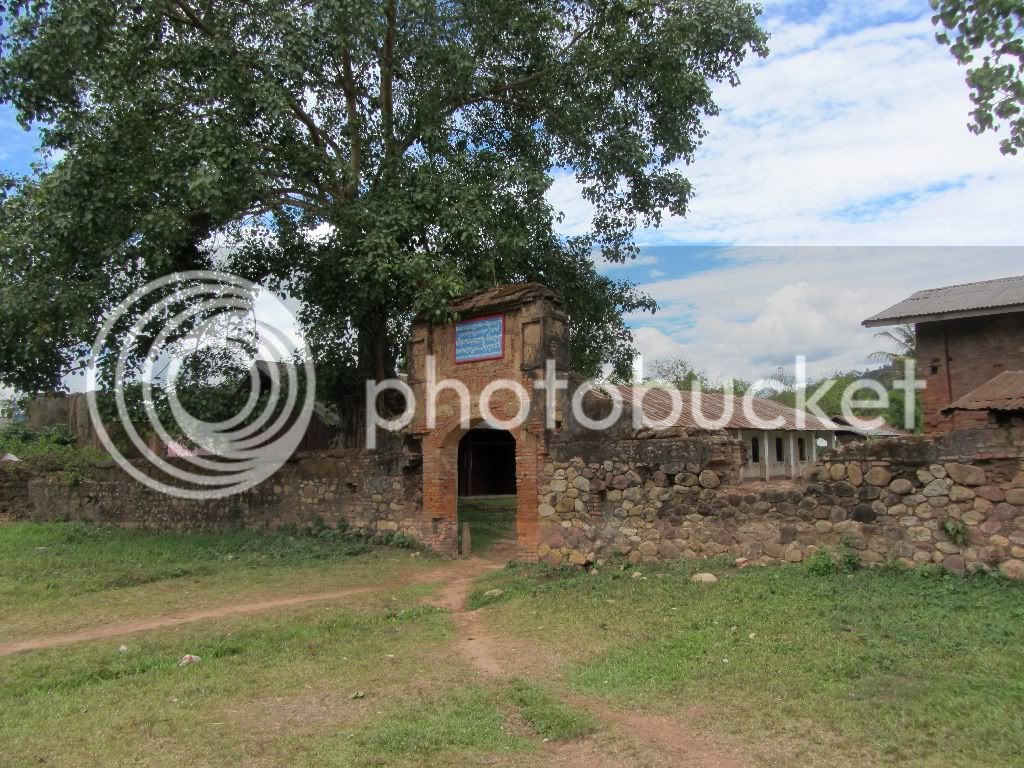 Fort in Thakhaek
The fort here from the time the French ruled the area is in danger of disappearing. In Thakheak only the gate and parts of the ramparts are still standing but the area where the fort was located looks like it had been cleared completely (construction site?) and the gate might disappear. 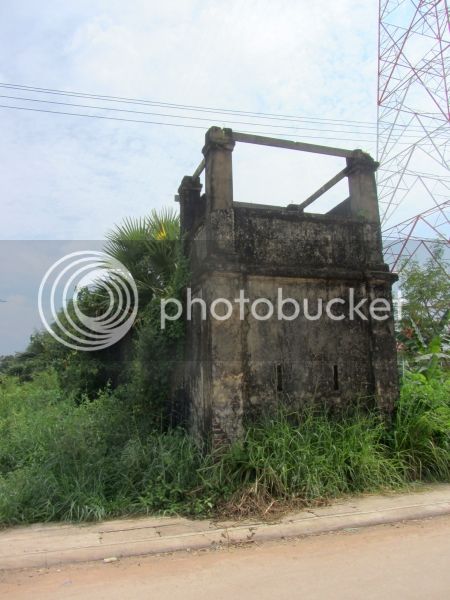 Just a few of the other French military related left-overs: Another French military base which still exists but which is off-limits to the public is the SENO (Xeno) Base and Airfield east of Savannakhet. By the way, SENO stands in French for Sud - Est - Nord - Ouest or South-East-North-West in English

Another remnant of the past - the French Military Cemetary in Vientiane

So, what will be the future of these historice buildings? That is difficult to say and much will depend on if the Lao people will be interested in their heritage and are willing to preserve the little what is still standing. Fort Carnot has been restored within the context of the ADB funded "Laos Sustainable Tourism Development Project" but it seems that the "push" to restore the building was (in my opinion) more based on foreign and a little bit of local interests in creating a site which tourists might want to visit rather than safeguarding the history of Laos. The restoration has not been finished completely and the Bokeo Provincial Tourism Department, which was running the Museum located in one of the restored buildings, has now closed the museum as well as the Fort due to a lack of funds, manpower and maybe interest.

Some of the things which were shown in the Museum in Fort Carnot: 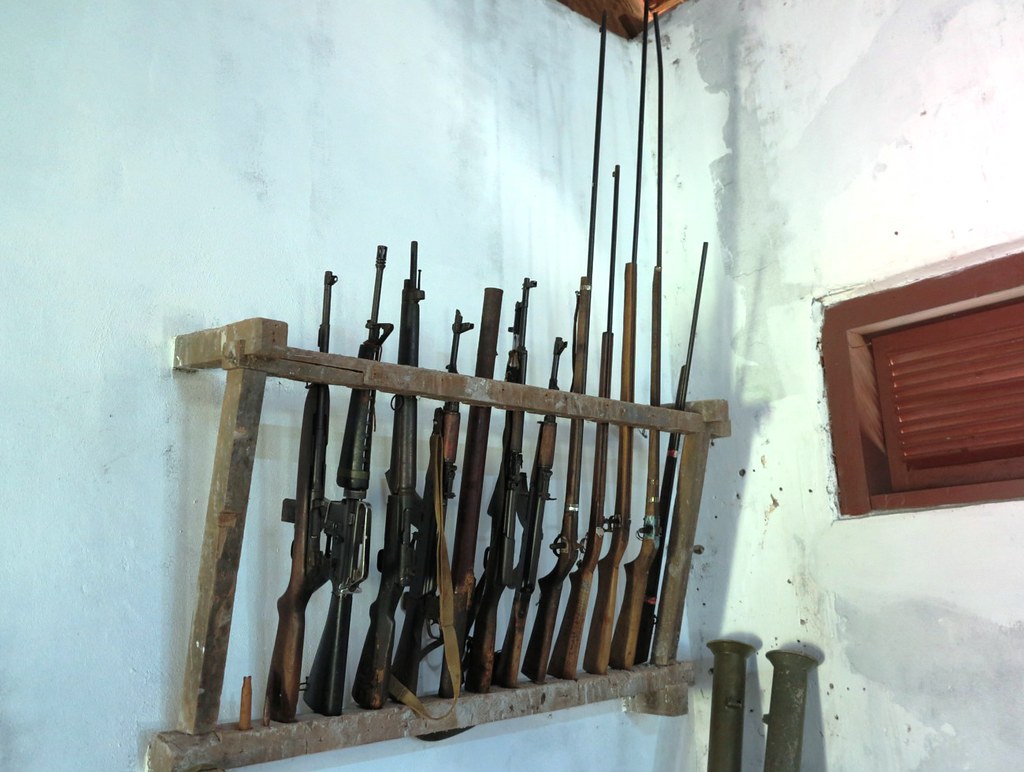 The same happened with other buildings like for instance the old French "Cercle des Officiers" building (French Officers Club) in Vientiane as well as other heritage buildings. Local groups like the Bolisat Anulak Heuan Lao Jumgaht (also known as Unique Lao Properties) which was founded in 2002 to help families retain ownership of their irreplaceable buildings through a long-term cost-sharing program indicate that "each year many interesting and sometimes historic structures are lost to neglect and economic necessity". While Laos and Vientiane have laws intended to prevent the loss of these buildings, unfortunately these laws are hard to enforce in times of rapid economic growth and land speculation.

One of the buildings Anulak Heuan Lao try (tried) to save is the French Officers Club. It now looks like that the building might be demolished and a highrise hotel might re-appear on the same site (http://uniquelaos.com/cercle.htm) Could this happen also with the military forts? I sure do not hope so but then again Fort Carnot is located on a piece of "prime real estate" with fantastic views over the Mekong and I would not be surprised if in due course the fort disappears and a hotel, residences or office building would appear instead.

So, if you are in the neighborhood, have a look before these historical buildings or whatever is left of them disappear forever

Thanks for this excellent update on the French séjour in the former Kingdom of Laos. It is a lot of work to compile such information - thank you!

And that's how Henri Mouhot's tomb looked like in 2009.

Yes, the tomb is a bit out of the way and it takes a bit of a half day expedition to visit it. It seems that no-one is in charge of the upkeep of the site although Hotel Villa Maly in Luang Prabang which has a Henri Mouhot bar and the Nava Mekong indicated that their staff in 2013 went there to clean up the site (video of the site of the tomb of Henri Mouhot starts around 9:30).

Some additional information and pictures on the waterfalls in Xiengkuang (Phonsavan) as the info provided in About-Xiengkhouang-Things-to-See-and-Do is a bit outdated (village names have changed, etc.) 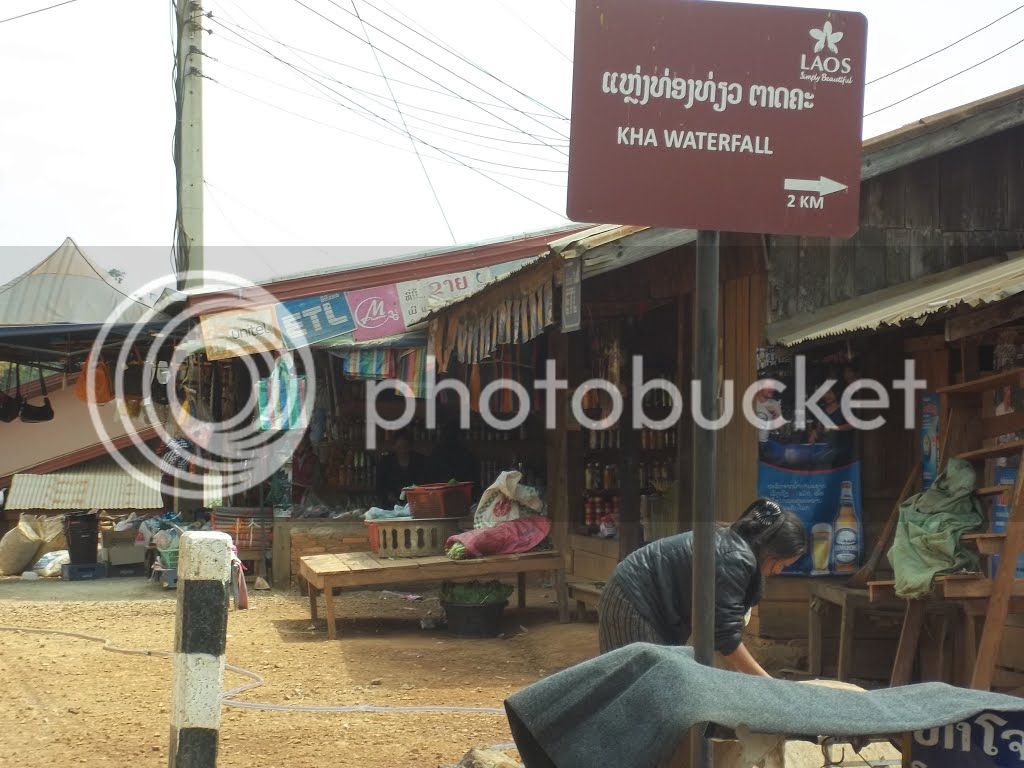 Oudomxay provincial authorities are improving the over-40km road running from the provincial capital to Chom Ong cave in Xay district as well as the facilities around the site. Chitchareune Construction Co., Ltd. signed a Memorandum of Understanding with the Ministry of Information, Culture and Tourism in November last year to undertake the project, with work to take 27 months from November 2017 to February 2020. The project is being funded by the Asian Development Bank at a cost of more than 108 billion kip (US$13 million), provincial authorities said.

Under the agreement, the company will be responsible for improving the entrance to Chom Ong Cave by asphalting a 4.5-metre-wide road and a 0.25-metre road shoulder. The total length of the road will be over 40 km, and will include the installation of drainage and embankments. The company will also put in a sidewalk and steps from the parking area to the entrance of the cave, which will be 250 metres long. The sidewalk and steps inside the cave will be 2 metres wide and 800 metres long. The company will also build other facilities including a 4,000 square metre parking area, public toilets, six shops, an exhibition room, power lines to carry electricity, and lighting inside the cave.

Chom Ong cave (coordinates N20.71824 E101.76271) was recently rediscovered and the province is set to make the most of it as a tourist attraction. It is located about 48km from Xay district centre near a Khmu village called Chom Ong. The cave is recognised as being one of the largest in Southeast Asia. It is nearly 16 km. long and is ranked the sixth longest in the world. The longest cave in the world is 44km, according to a European survey team.