Here is the overview map, basically access to this border is from highway 24 then south on 4001 until the check point.

The close up shows the two border points, the Sangam/Choam is the one on the right 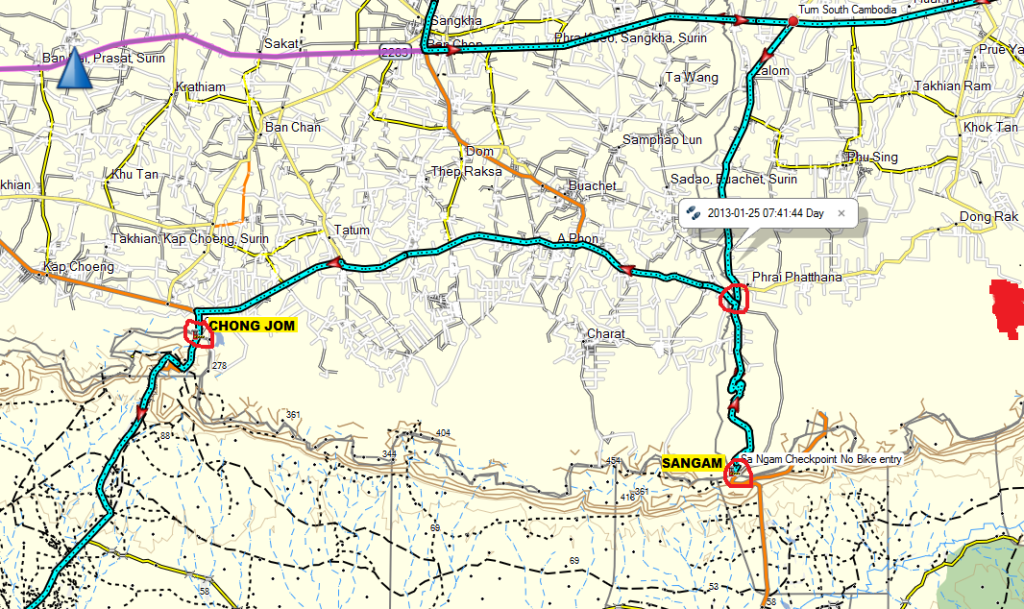 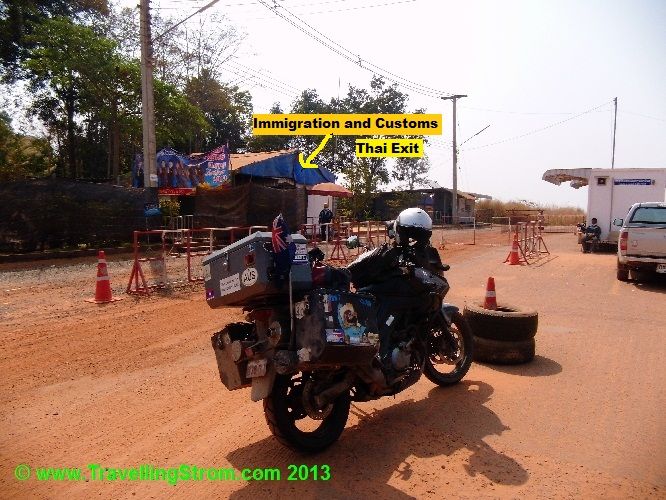 I was processed through immigration on the Thai side, departure paper removed and passport stamped out. Then when I mentioned the bike paperwork(Australian registration), they told me to go up the road 100m and ask the Cambodian Customs people. 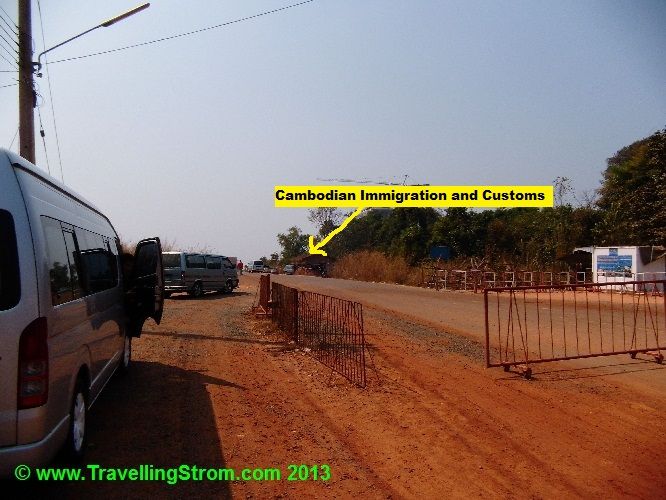 When I arrived there, in the boiling hot sun mind you late morning, the immigration man said he could stamp me in no worries(I had a visa already from Vientiane Embassy, but visas are available here on arrival), but the customs chap would not allow the bike in because he did not have the correct paperwork available to process a foreign bike. I did not ask about Thai bikes. I begged and pleaded to no avail. I know somebody told me maybe it is possible to just ride through without worrying about paperwork, but at this border, the traffic was slow and there would be no way to sneak past. They told me to go east to the next border point and I should be allowed to cross there.

So I head back up the 4001 and at the military checkpoint(where the guys smiled and laughed, I just smiled and shrugged) I headed east on the 2328 and where it meets the 214 I headed south, note, there are NO signposts telling you to go south to Cambodia, I just happened to ask a local scoot man and he said Chong Jom that way, and a few hundred meters down the road, the distance sign confirmed the direction. There was a sign just before the intersection saying Chongchom to the left, so unless you know the border name and can recognise it it would be easy to go straight ahead and end up Prasat. 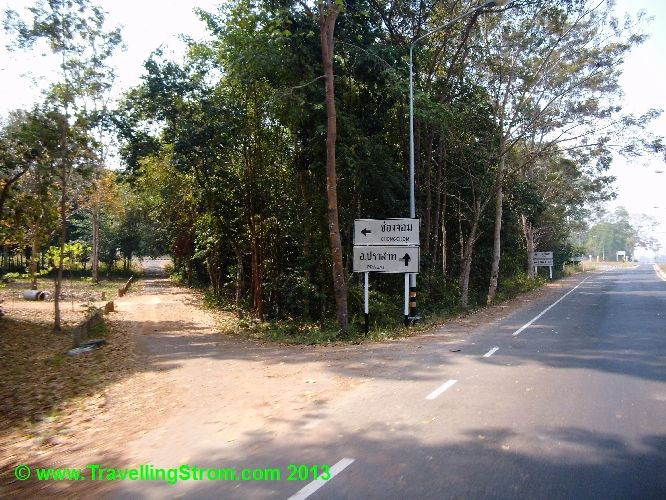 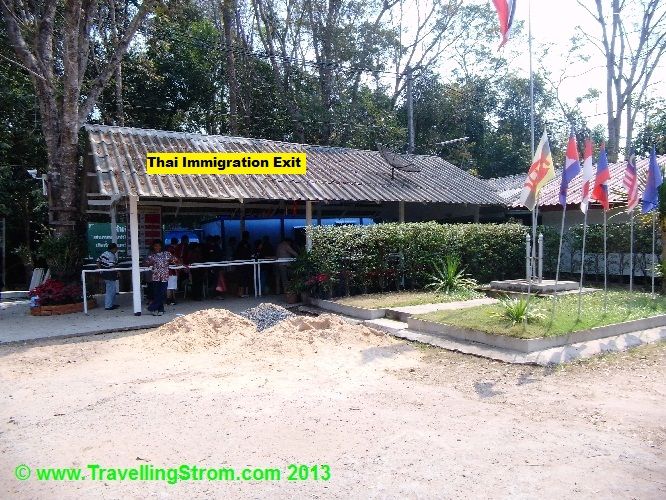 And the customs is to the right 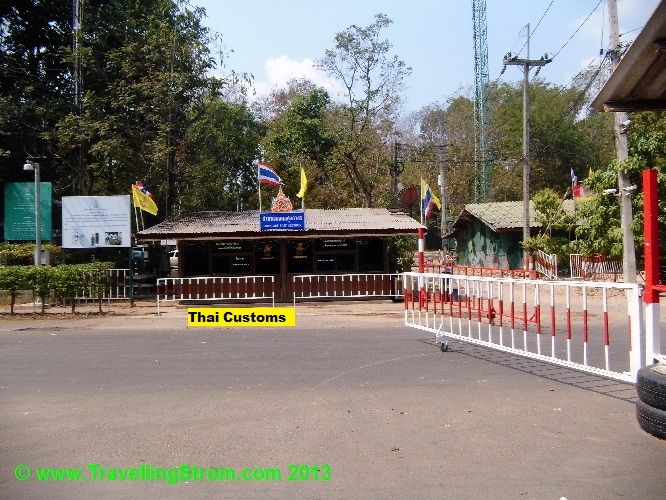 Once I have explained the cancellation of my passport stamps, I get restamped out and am allowed to proceed. (Just a quick mention here. My original departure paper was stamped and removed from my passport at the previous border post. I did not notice that the stamp on the paper had been cancelled and restapled back into my passport by the very helpful Thai chap in immigration back there. Lucky for me as I may have been asked to return for it!!?) I go across to the customs who stamp and take my TVIP, all as normal.

I then proceed into the Cambodian side, the visa on arrival building is just to the left next to the resort entrance, while across the road on the right is the immigration building. 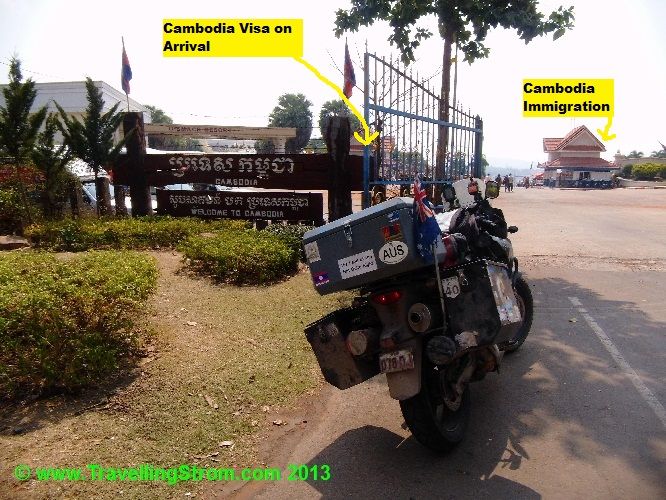 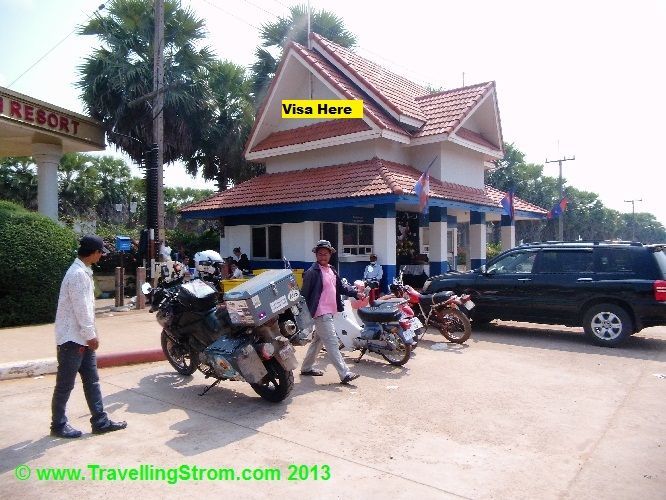 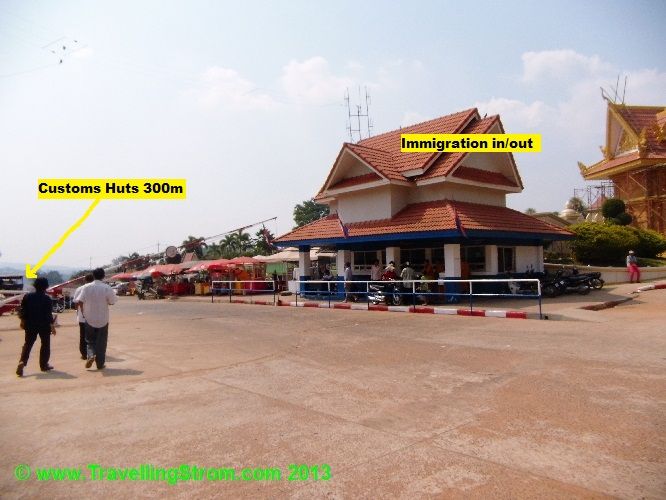 The customs huts are down the road about 300m and about 100m before the final security checkpoint. 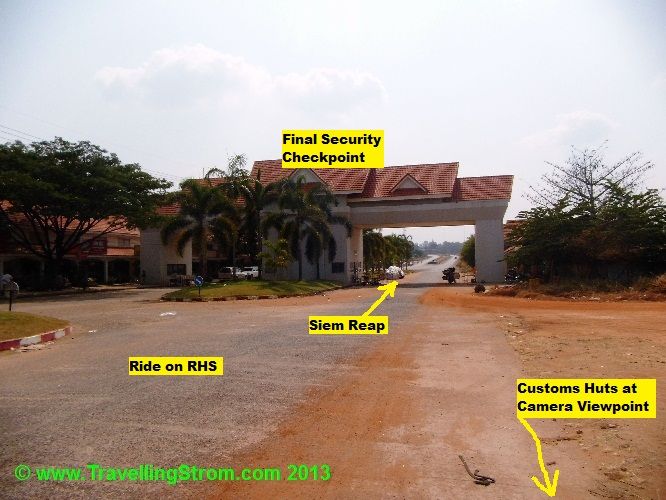 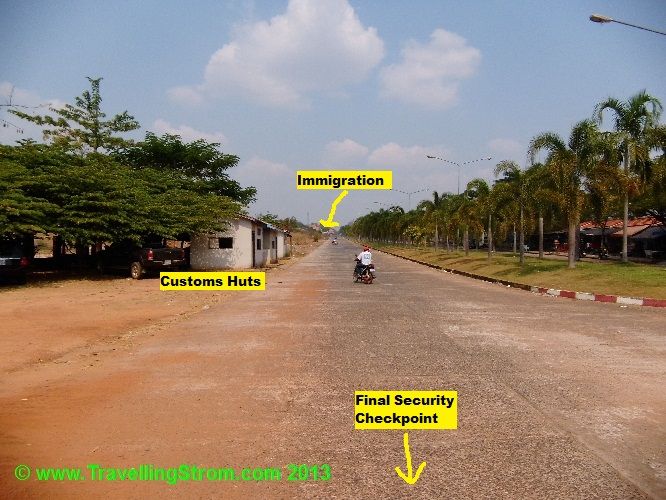 I had parked under the big archway, in the shade and the very nice security chap spoke English and told me to go back up to the huts. I took my paperwork, the guys here were all sitting in the shade out behind the buildings, no uniforms that I could see, nor name badges. One chap looked at my paperwork(my rego is copied and laminated but is now out of date since 24 dec 2012), he told me to be on my way, and that was it, I was now allowed to ride in Cambodia!!!

So, there you go, I was successful, after an abortive start, and just for the record I am now in Siem Reap

Very useful information Richard, what a pain in the ass.

I've done a zoomed out map below to show where the 2 international border crossings are in relation to Bangkok, thanks for sharing this, many will benefit.

Would you mind popping around and seeing if my KTM is still parked where I left it in Siem Reap?

I booked a ticket earlier today, back to SR, for mid April. Current plan is to head northwest from there.

Sure, give me a GPS location and some contact details and I can check that out, I will be here a few days or more

Would you mind popping around and seeing if my KTM is still parked where I left it in Siem Reap?

I booked a ticket earlier today, back to SR, for mid April. Current plan is to head northwest from there.
Click to expand...

On my one and only trip into Cambodia I crossed at Sangam on my Thai registered BMW about 6 years ago with no problems, no paperwork was asked for or given to me.
I guess things have changed there now, its looking totally different too going by your photos

Bigfella. Best you reply with details real soon or you will miss the boat

Thanks Richard... I've been having an email exchange with my Cambodian mate. He assures me she's fine. The bike is up a pretty rugged dirt lane, so thanks for the offer, but continue on as planned....

The Bigfella said:
Thanks Richard... I've been having an email exchange with my Cambodian mate. He assures me she's fine. The bike is up a pretty rugged dirt lane, so thanks for the offer, but continue on as planned....
Click to expand...