Enfield "holiday" trips in The Netherlands

Allow me to start my bike and trip stories on a small scale, discovering a new area where I live during this summer period in The Netherlands. As today was to be a sunny day I thought I give the RE a drive around the island.

The area is famous for the Delta Works, a large waterwork project which started after the big flood of 1953: Delta Works - Wikipedia, the free encyclopedia 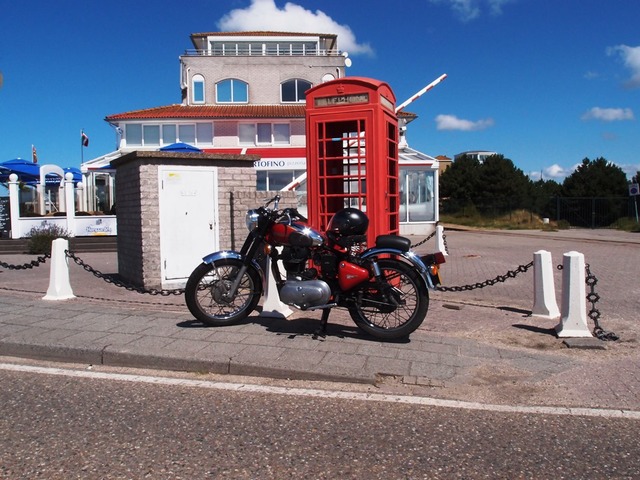 English touch on the area, at Port Zelande bungalow park and marina.

Not only potatoes, the farmers at the island grow pot plants and flowers too. This area has a sandy soil and because of the poor soil the farmers here were quit poor. After the arrival of mass tourism this changed.

This lighthouse was built between 1947 and 1950, the German occupiers destroyed the original lighthouse of 1862 on the 5[SUP]th[/SUP] of May 1945, 3 days before capitulation.

Northsea at the Grevelingen dam near the fishing boat ramp, groyne (is that the right word?) on the background.

Ouddorp windmill "The Hope" built in 1845 replacing the original windmill dating back from around 1600. Totally restored in 1981 and in DAILY operation!

The blue house, a farmhouse of 1659 and currently the local tourist information office.
Many farmhouses (cattle stayed close to the house) in the area were painted blue to fend of the flies?!?!

Former city hall of Ouddorp and now museum, build in 1904.

During the second world war the Germans occupied The Netherlands. These are some of the Atlantic Wall bunkers, another solid heritage slowly disappearing from the Dutch landscape. Difficult position to capture these massive 70 year old buildings.

Soon a new trip and two up I hope!

Thanks for sharing those moments Marcel.

Prachtig Marcel (Beautiful) - hope that next month, when I am in the Netherlands the weather is as good as you have there at the moment. Hope that Pun will like the trips on the Enfield as much as you do.

Thanks Ally, thanks Auke, have a great holiday with good weather.

Pun wants to learn drive big bikes, so today she took her first lesson in Holland, she will take some more and get some bike experience during her stay in the Rai.

The idea is to take more lessons and gain more experience in Holland next year visit.

That is so sweet

Pun says thanks Ally, next lesson on Wednesday.

Weather was great for a nice spin today, clear sky and not too warm so I thought I would follow up on my previous report.
Had to adjust the chain tension so I started the way you always look like on an Enfield, black and greasy.

Today I set off where I left last time and visited the Ouddorp lake side marina, viewing lake Gevelingen.

Then onto the little village Goedereede (means good anchor place) passing the Windmill of 1720.

Goedereede has a typical Dutch centre where all the houses have different facades.
In the middle is Hotel de Gouden Leeuw (the golden lion) dating back to 1480.

Also typical is the square shaped church tower, built between 1467 and 1512, it also served as a lighthouse until 1912.
Initially lit using a coal fire but in 1834 a lighthouse was placed.

Well, Holland is flat and has a lot of farm fields, here potatoes near harvesting period.

Stellendam is an old fishing village and has a sea side and a lake side marina, used both recreational and industrial.
Here is the sea side lifeboat.

The marina of Stellendam is used mainly for the fishing industry and has its own dry dock, this is the lake side marina.

In Stellendam for sure there's a windmill too! This one dates back to 1856.

End January 1953 there was the North Sea flood, 1836 people in The Netherlands died during this disaster.
Stellendam had 61 casualties and below is the monument to commemorate their death.

Next time, two up I hope!

Does it leak much oil?

Not really, but never ride it with a new pair of jeans!
But after not riding her for 2 weeks, she does burst into blue smoke for the first two minutes or so.......

Raining today, time to play with the photo software, amazing what you can do with Picasa

I am hoping on an Enfield in Thailand Nikhuzlan!

Just now found this thread.
Thanks for something new and interesting Marcel.
One pretty bike there!

Thanks 2wheels, now hope for a pretty autumn so I can do some more miles on her.
Or better, just put her in a box and bring her to see the roads in the Rai!

The old girl does not like to sleep outside and she shows the lack of TLC by developing a strange skin allegy.

75% done today, the weather was OK in Ouddorp!

Back in Holland for about a week and picked up the Enfield from my dad's garage yesterday.
After 8 months it started at the second kick and ran just like I parked it, apart from burning some oil which is normal for her. Drove her to our summer location and today spend some hours removing most of the dust and salt air deposits so did some major TLC.

Put her up for sale at a Dutch website, a '93 RE 500 Bullet for 1500 euro, all original Dutch paperwork. Many reactions but mainly virtual tirekickers......

in the mean time will do some more trips if time allows and surely will post pictures.

I'll be flying overhead shortly Marcel.
And looking forward to your pics and stories.

Well, tomorrow morning the first potential buyer and he sounded really interested.
The RE might be sold by tomorrow......