Kupang, the biggest city in eastern Indonesia, is not the ideal place to be if you're in a hurry. Traffic chaos is epic and I was in the thick of it, making a mad dash to Bolok Port to catch the Sumba ferry.

It shouldn't have been like this. At 4am that morning, after disembarking from the Alor ferry, the impressive Port Departures Board had boldly listed the Sumba ferry as leaving at 3pm: it actually left at noon! Luckily, I'd returned to the port at 10.30am to buy a ticket and had been set straight by the ticket seller. I made a mad dash back to the hotel to get my gear and check out.

Throwing caution to the wind I broke all my rules. I passed trucks on the left, I overtook, assuming no on-coming biker, texting on his mobile, would collect me head-on and I ducked and dived to get to the head of the queue at traffic lights. In short, I was riding Indonesian-style! With little time to spare I pulled up at the Port gates, showed my ticket and headed for the dock. 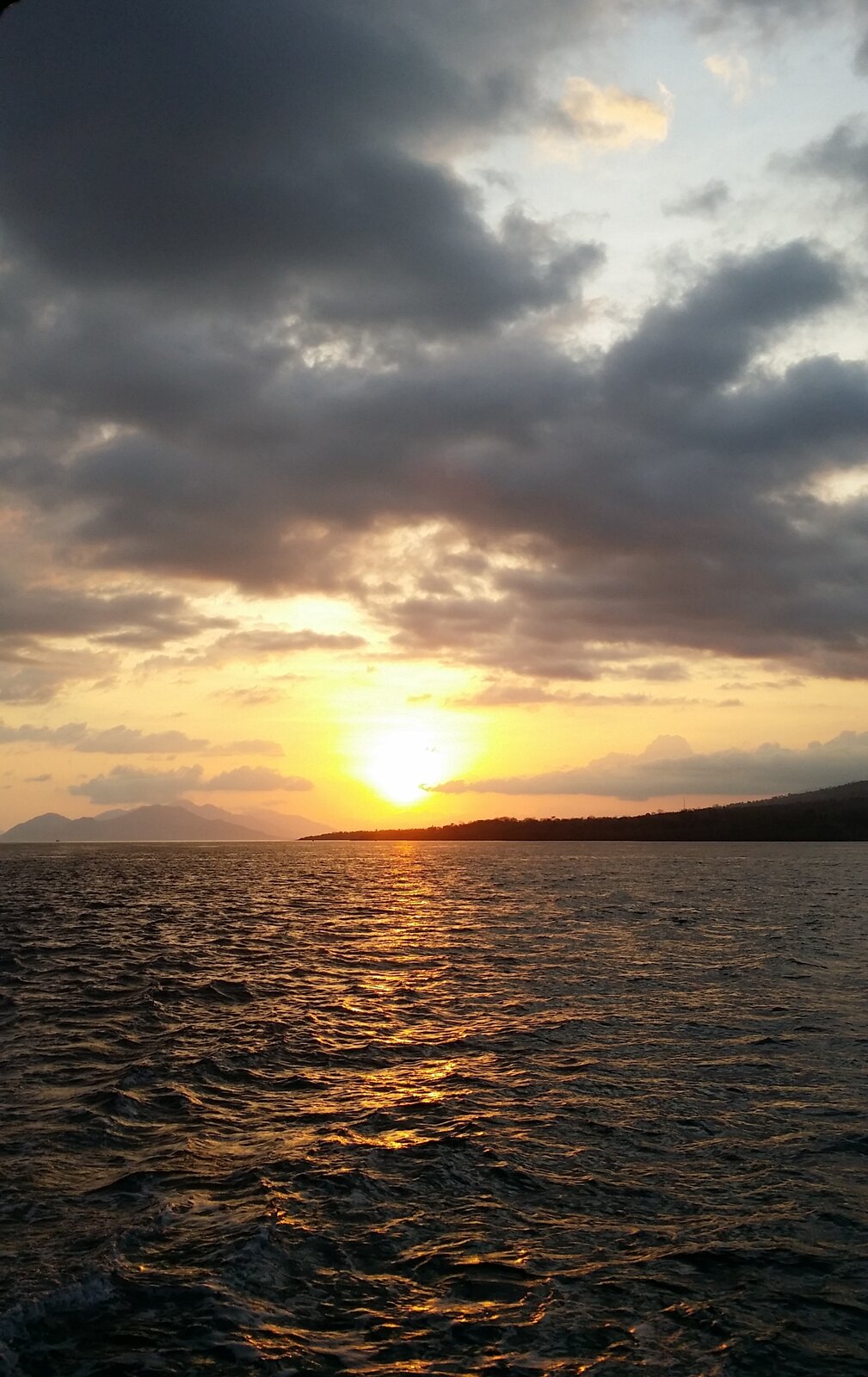 The last few motor bikes were boarding. Hallucinogenic heat, mixed with exhaust fumes, swirled around me. The vehicle deck was jammed solid with trucks, crates and cartons. Mine was the last bike on. I managed to wedge my way between a scooter and some stacked crates, each containing a squealing porker. There was no need to tie up - my KLX150 wasn't going anywhere!

I found a spot below the port lifeboat where I'd be out of the sun. This was going to be home for the sixteen hour trip east to Savu, a tiny island famous for its ikat weaving and lontar palms. The ferry, even by Indonesian standards, was packed to the gunnels. 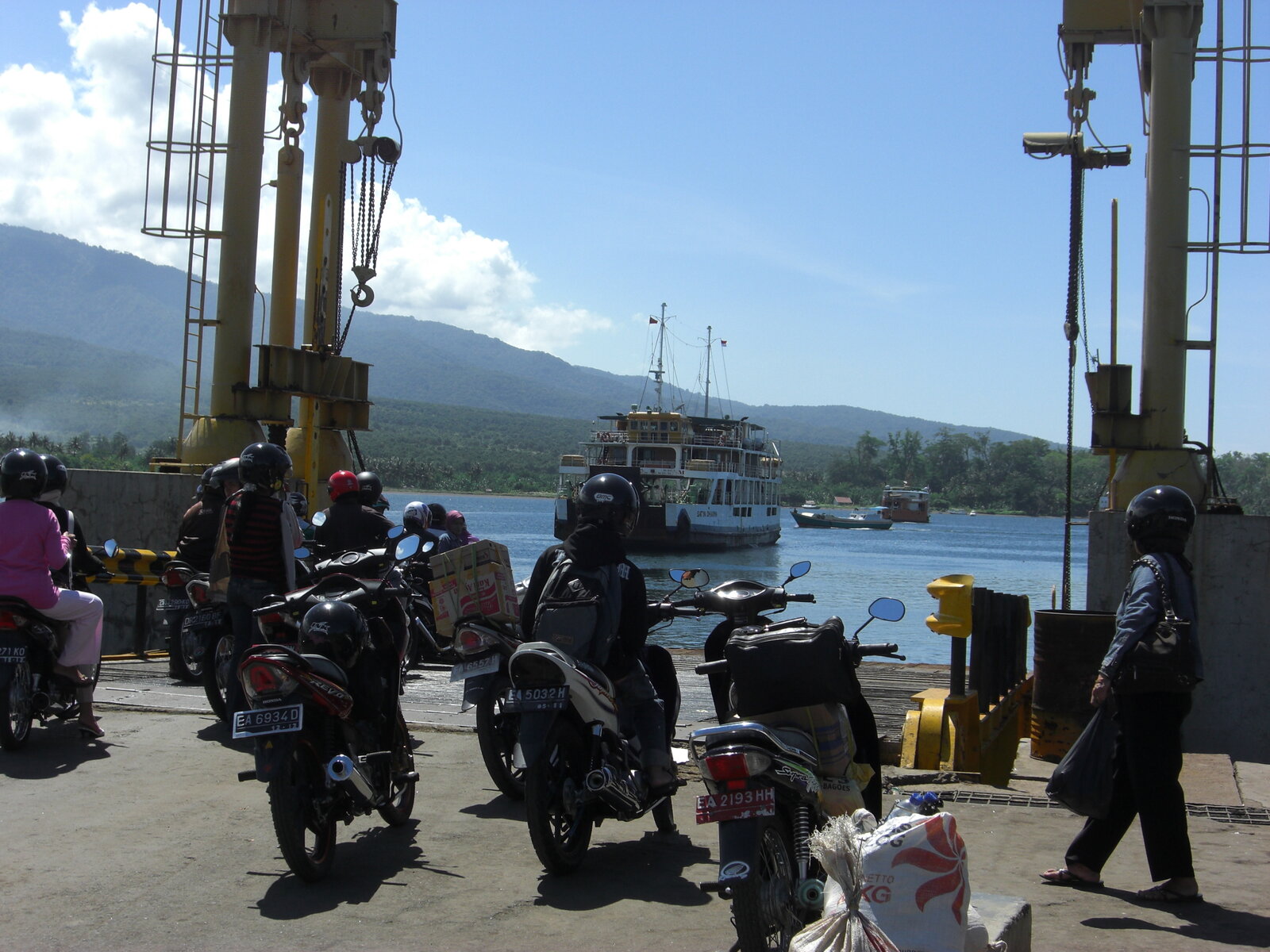 I headed topside to check out the passenger lounge. It was madness. A Chinese martial arts movie was booming on the TV, the floor was covered with bodies sprawled out on rented foam mats, every seat was occupied and plenty of kids were sitting on laps. Every second male was smoking and those that weren't were about to light up.

I spent the trip lying on a thin cane mat I'd bought for $2 just prior to boarding - a fortuitous purchase indeed. With a folded 40 year old Levi jacket - just run in really - for a pillow, a bagful of sour mangoes, a packet of biscuits and a copy of Orwell's Burmese Days in hand, I was well set for the voyage west across a languid sea. Even so, a slow boat crammed to capacity, making about 10 knots, is guaranteed to get you checking your watch from time to time!

I shared my little hidey-hole with a group of four males who spent their time smoking and playing cards. They basically ignored me - they could see I was engrossed in Orwell's devastating critique of the toxic nature of British Imperialism played out in a dreary up-country backwater. 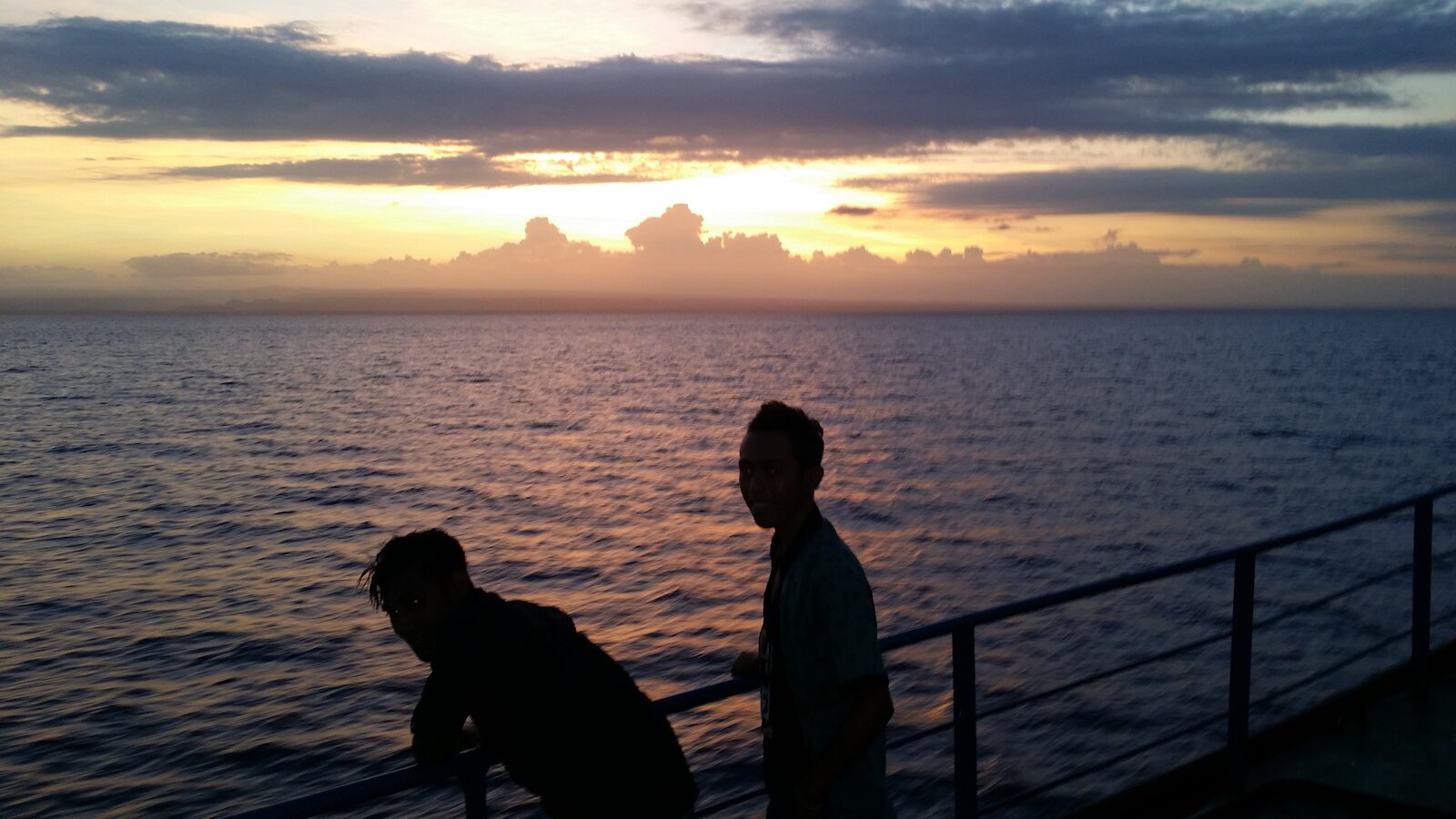 I reached the novel's end. Florey blew his brains out about the same time a glorious sunset heralded the onset of night. We steamed westwards, our progress measured by a billion blinking stars. I slept in snatches unable to distinguish between dreams and stream of consciousness. Was I awake? Was I asleep? I had no idea. I craved deep sleep but it was always just beyond my grasp. Tiring.

*********
We arrived in Savu at 4am but the tide was out so no vehicles could disembark. A posse of uniformed cargo handlers leapt aboard. They formed a human chain and began unloading a massive stack of cartons. I joined in; there was nothing else to do and, although tired, I was grateful for the exercise after hours of inactivity. Every tube of toothpaste, bar of soap and can of drink sold on Savu comes from Kupang - believe me as I had a hand in unloading each one!

The owner of the goods kept a watchful eye over his bounty. After an hour he broke open a carton of flavoured tea and we took a break. The still air wrapped its cloak around us; the sweet, warm box drinks were a mocking reminder of what I really wanted - an ice-cold beer! We set to work again. Up on the dock a small crowd had gathered - attracted, maybe, by the novelty of seeing a tourist actually doing some work!

By 6am the sun was climbing. The ship had emptied so I took the opportunity to stride the vehicle deck. I jogged up and down running figures of eight. People might be thinking, "He's mad!" I didn't care. My feet
were swollen from inactivity. I needed movement!

We got underway again at midday. The vehicle deck was bare save for one car, twenty motorbikes and hundreds of containers of lontar palm sap bound for our destination, Waingapu, Sumba island. We cruised a calm sea, the flat mass of Savu gradually fading until it was just a smudge on the horizon to stern. I shared some biscuits with my fellow passengers and ate sticky rice snacks in return - we were all in the same boat. 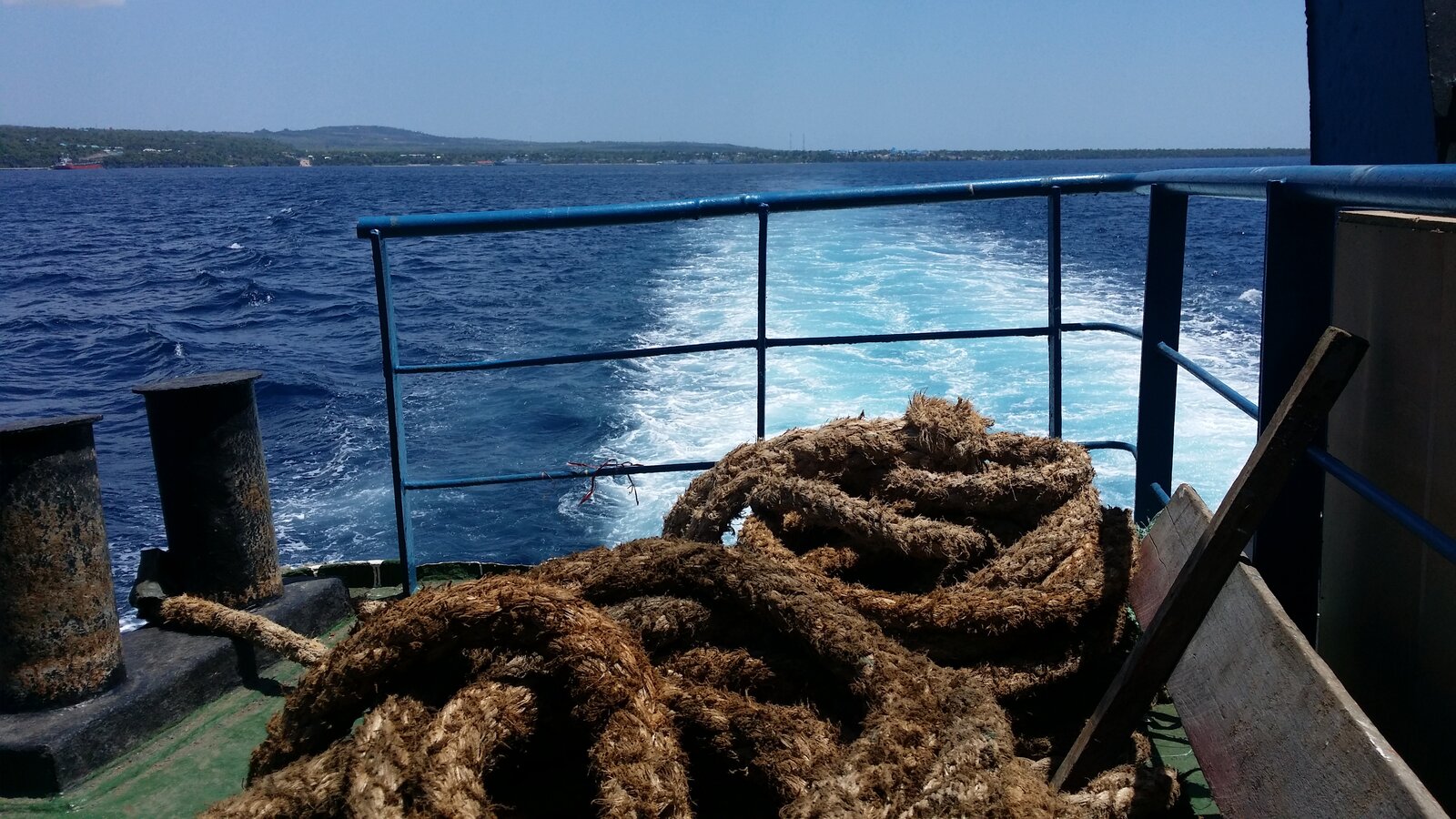 We sailed north-west across the same featureless sea. Darkness fell; the stars came out to light our way. Most passengers lay on deck alongside their precious cargo. I scanned the western blackness seeking the first pinpricks of light from Sumba. At 10pm a light appeared blinking every five seconds; at last we were off the coast!

Two hours later we docked; a handful of locals greeted our arrival. A couple of taxi drivers came aboard looking for fares - without luck. Some dealers had set up scales on the dock to weigh the lontar palm before loading it into waiting trucks to be whisked away for processing.

I wasted no time getting underway. It felt so good to start up the bike and hit the road. Thirty-six hours at sea is a long trip - maybe not, if you're aboard a cruise liner sipping cocktails! But I'd been traveling at the opposite end of the scale - if I was even on the scale! I rode out of that ferry feeling like a freed prisoner. The potholed road greeted me like an old friend - at last I was back!

Midnight in Waingapu is shutters up time - well almost. I passed a solitary pedestrian and a stray dog. The cackle of exhaust marked my progress as I cruised the streets searching for a hotel. There was no traffic. I came to an all-night petrol station. A friendly local offered to guide me to a hotel. The Sandlewood (sic) would not ordinarily have been my first choice. It was faux modern, however, air con, a TV and a mini-bar - empty by the way - do not a pleasant hotel make. The furnishings looked grubby, the bathroom was tired and the cobwebs had gathered dust. But it was way past midnight and I was past caring. I stripped off. Sloshing gallons of cool water over my tired body, lathering away the patina of grime that clung to me like a carapace, was bliss. A few minutes later it was lights out and I was walking the Street of Dreams - 36 hours deck class on a ferry does that to you! 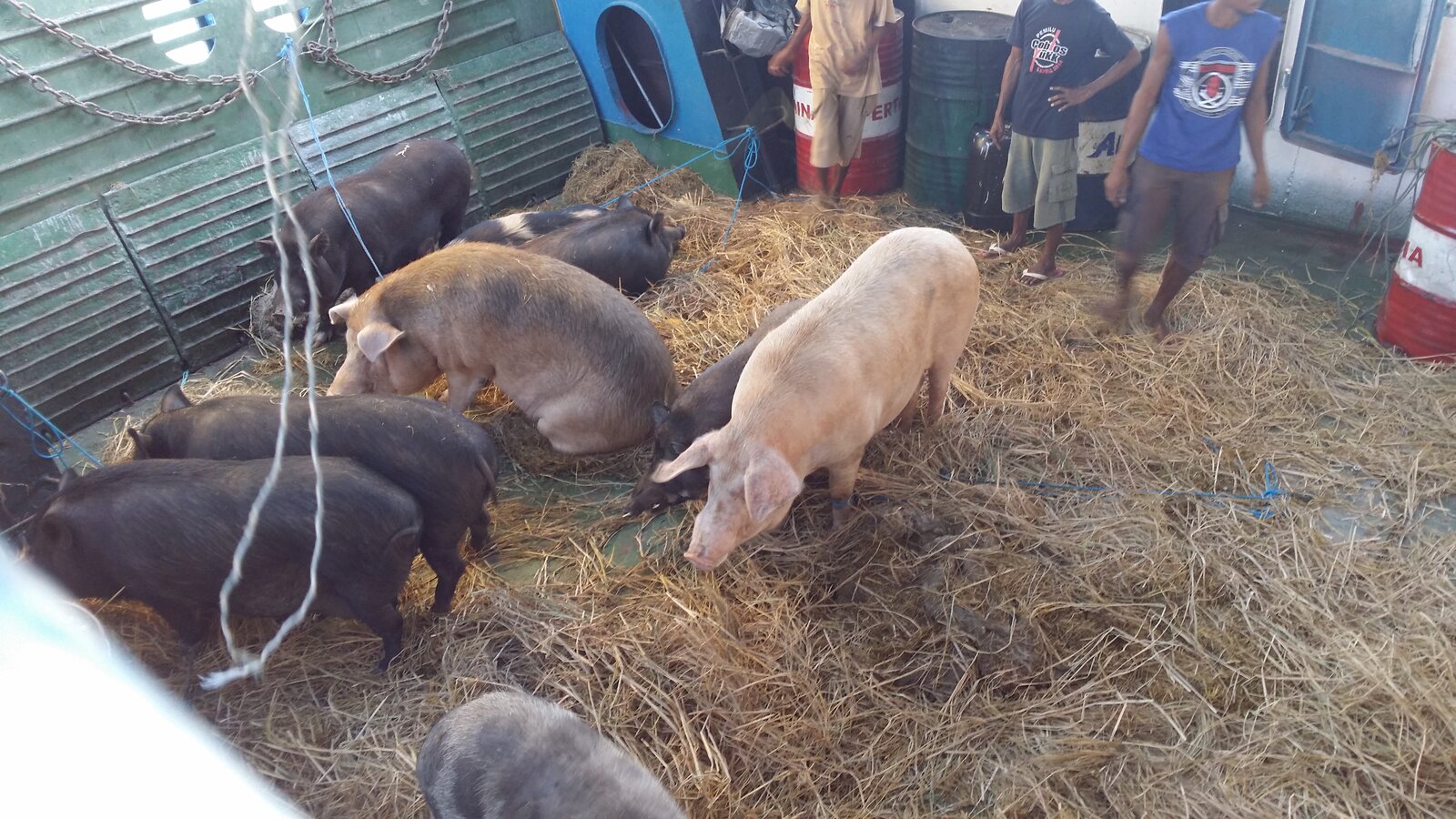 Sumba has revelled in its remoteness over the centuries. Dry, unsuited to spices or other cash crops and well south of major trade routes, it was practically ignored by the Dutch and was never part of any of the Hindu or Buddhist empires centred on Java. Muslim traders gave it a wide berth too and Christian missionaries only became active in recent times. Consequently its indigenous religion with its emphasis on ancestor worship, connection to nature and divination, is still vibrant.

I rose early and went for a run around town. The first thing to catch my eye was a very large rat making hurry down a drain. Then I spotted a couple of trendy cafes - hipster hangouts in far-off Sumba!

The streets were practically empty. I trotted along un- disturbed by vehicles or pedestrians. I passed ramshackle shops each one bearing a billboard advertising cigarettes. Mango trees laden with fruit shaded my way. I passed an impressive Catholic Church and school; a few early arrivals kicked a soccer ball around the yard. 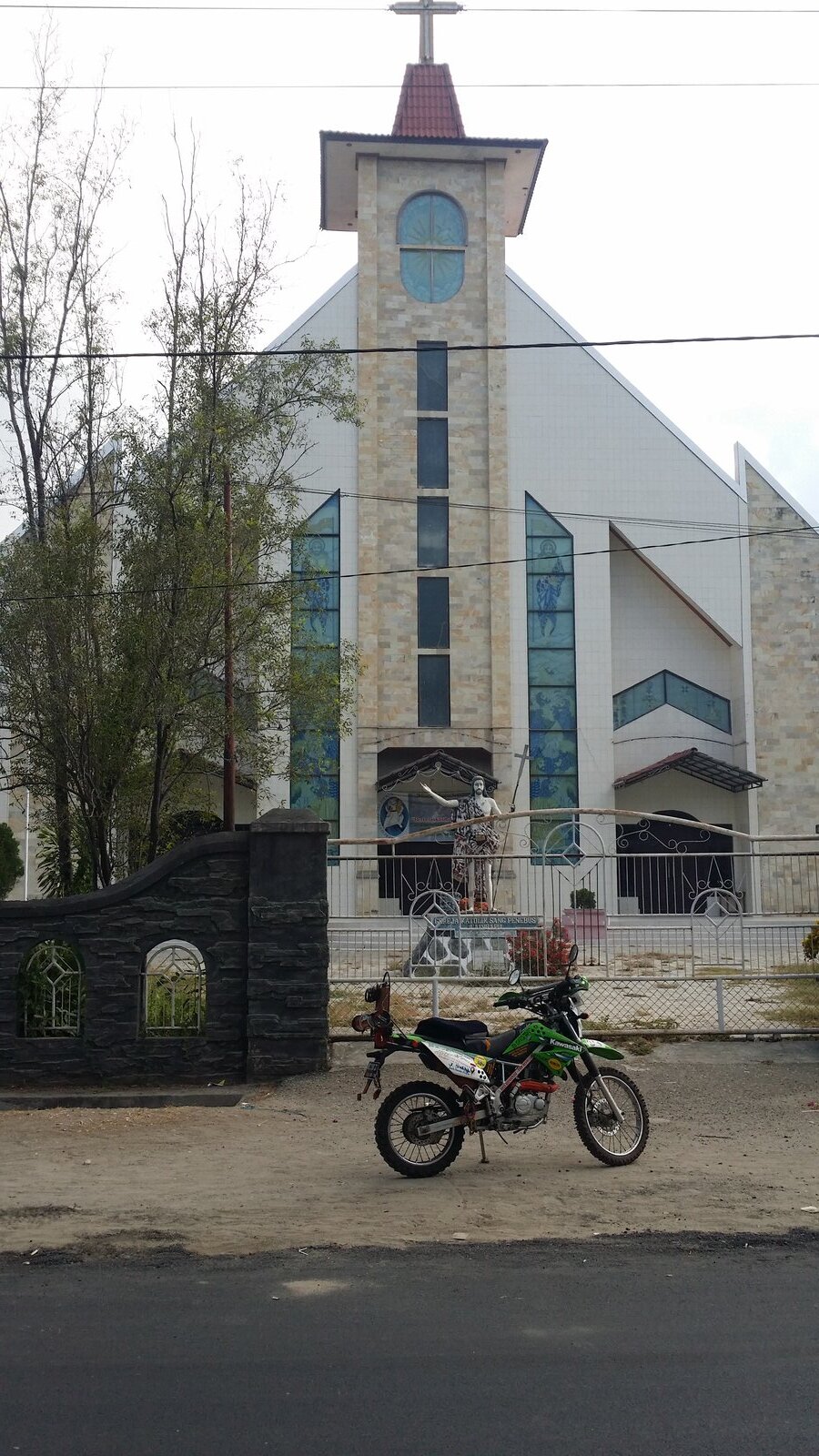 I turned around for the run home. Groups of pretty girls strolled along hand-in-hand, sparkling white uniforms framed a rich array of complexions from milky white to ebony. I envied their youth. How good it would be to turn the clock back and live life again with the benefit of the wisdom accrued!

Back at the hotel I had the worst breakfast ever - a couple of pieces of barely toasted bread that someone had waved a butter knife over. But the coffee was passable. I showered, packed and checked out. Bye-bye Sandlewood, you won't be seeing me again.

A few kilometres out of town I came to one of Sumba's few modern tourist attractions - an impressive statue of a warrior astride a rearing horse. It was mounted on a rather ugly plinth but the sheer size. height and form of the edifice made it impressive. While I was admiring it a couple of bikers arrived: two young women from Java on a university break exploring their own country on hired bikes. We chatted and took photos before going our separate ways. 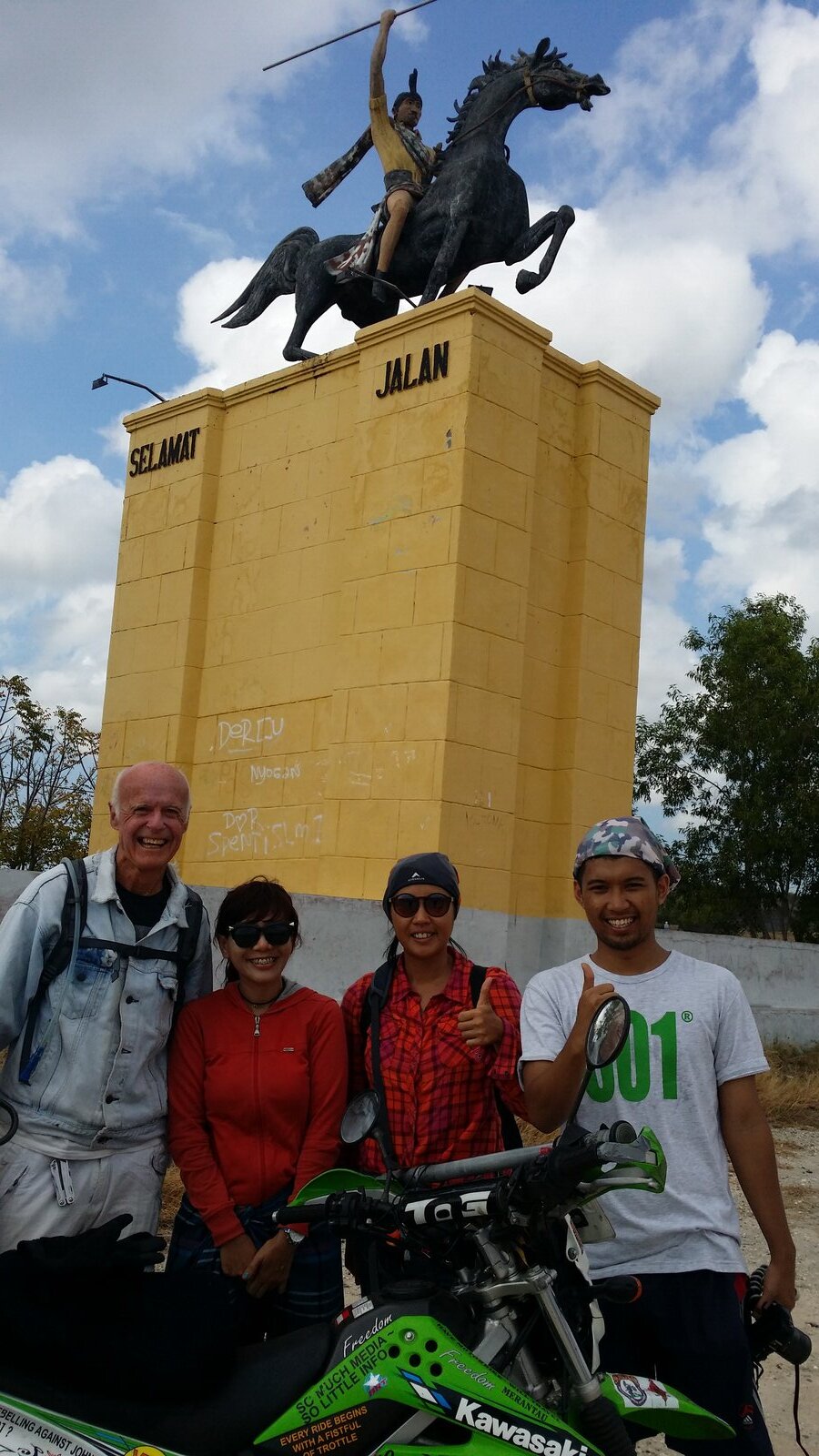 The eastern half of Sumba is savannah country. Rolling hills and high country plains covered in rich grasslands stretch either side of the excellent, practically deserted road. I passed through small patches of dense forest, emerald green and dark, the air perceptibly cooler. Traditional Sumba houses dotted the hills their distinctive truncated-pyramid roofs reaching ten metres high. The space within is used to store the family's harvest safe from the depredations of rodents. 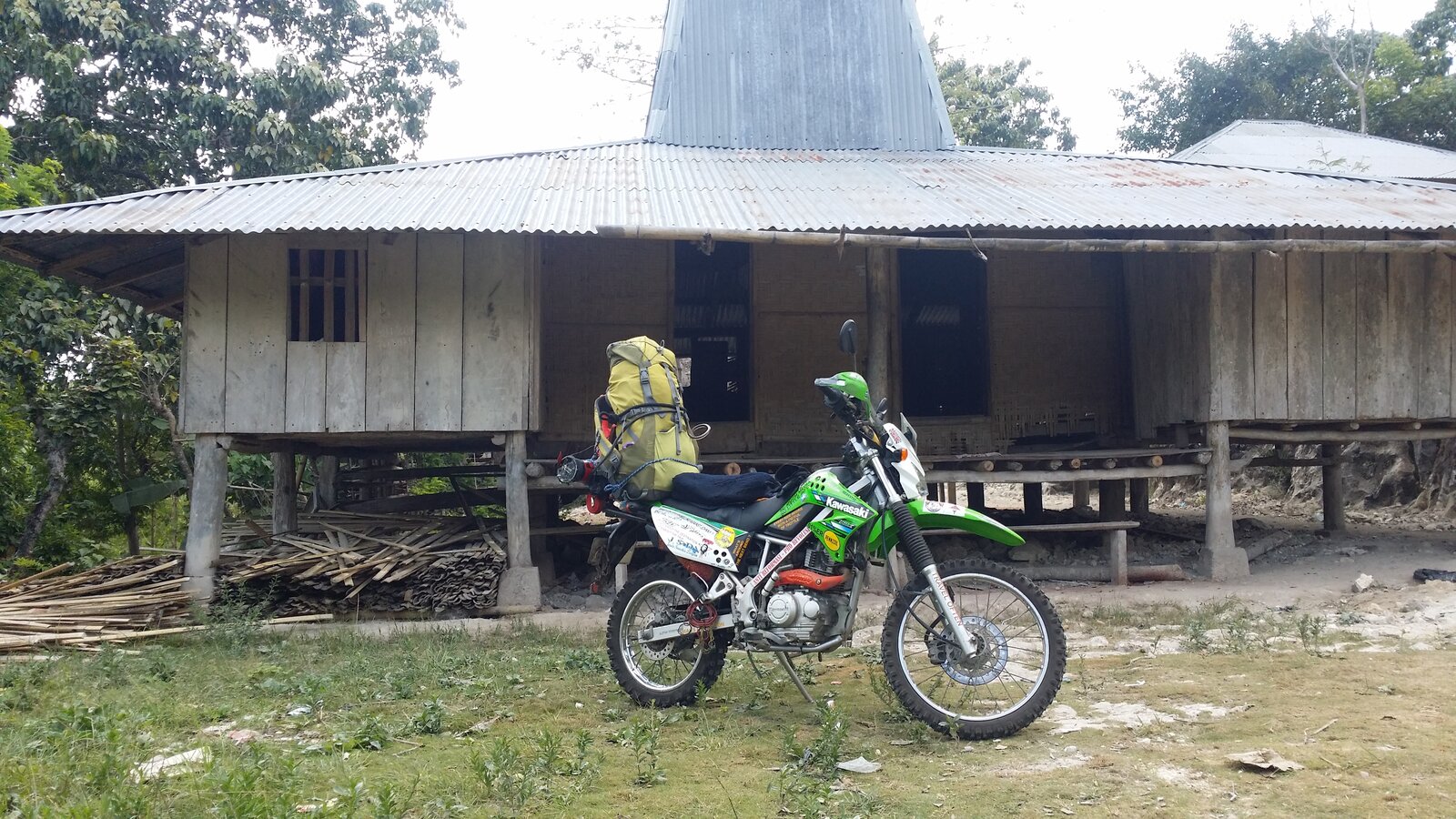 I pulled up at one of these houses - seemingly abandoned - to take a photo. As I turned to leave I noticed the family in the house across the way. They were sitting on their verandah. They beckoned me over. I spent the next half hour chatting with Grandpa and three generations of his extended family. They were farmers who grew corn and betel nut. All bore red-stained lips and teeth, testament to their addiction to the nut after which Penang island is named. All, that is, except one strikingly-beautiful woman who had the composure and presence of a royal. Her hair was silvery-white, her dark-chocolate complexion was unlined. Beauty is indeed ageless. 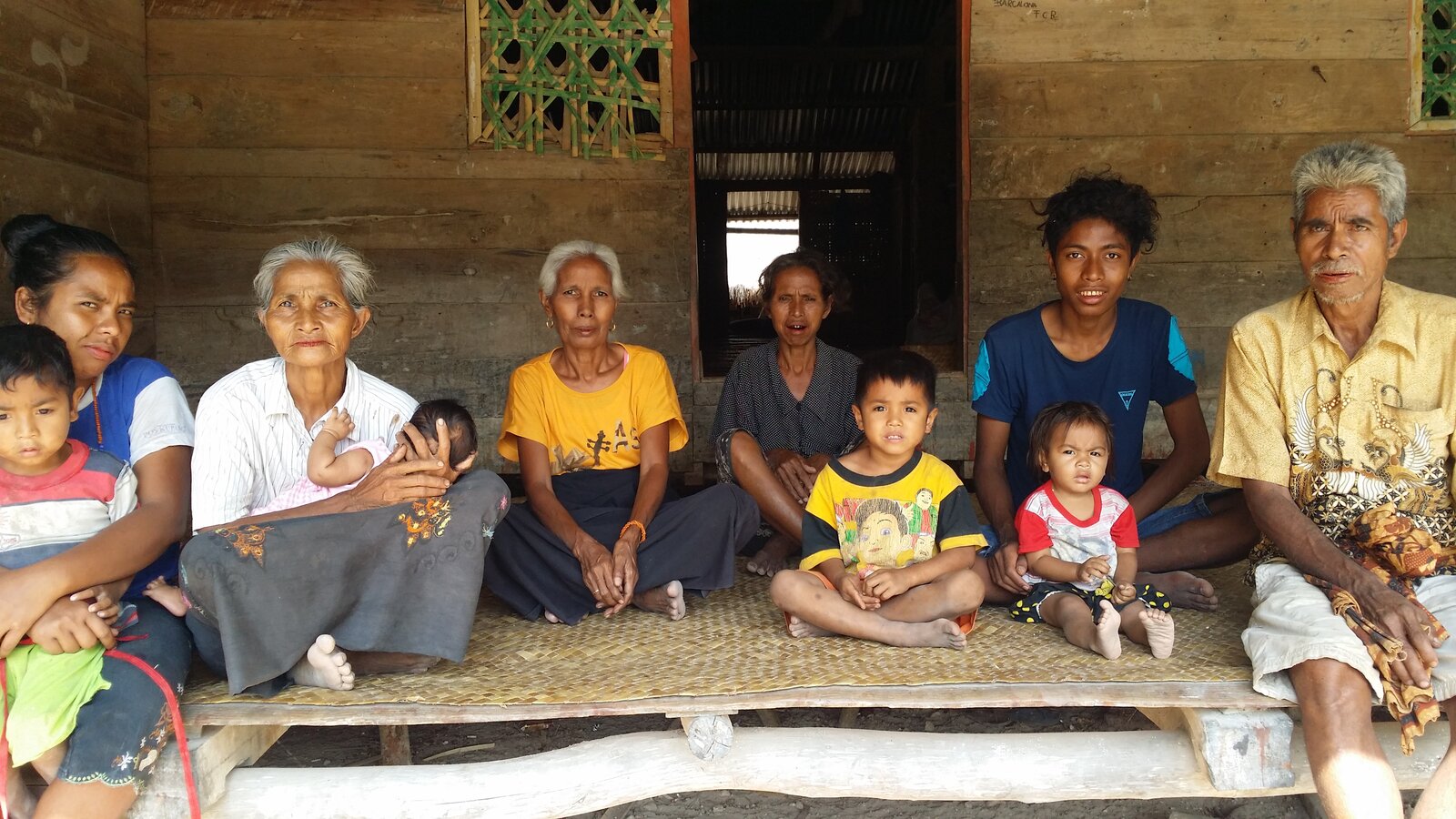 These people were very friendly but not at all inquisitive. They asked me no questions but were happy to answer all mine. They were nominally Catholic but, in reality, their lives were governed by the spirits of the ancestors, the need to propitiate local deities and the ebb and flow of the seasons. Big town life and most of its influences were yet to reach this outpost, even though it was a bare three hours away from the island's biggest town.
You must log in or register to reply here.
Share:
Facebook Twitter Reddit Pinterest Tumblr WhatsApp Email Share Link
Top Bottom