I continued my journey towards Waikelo on the north-west coast. Passing through the small hamlet of Lenga I heard a voice from the roadside call out in English. Intrigued, I turned around. The voice belonged to Maria, the owner of a small general store and cafe. I ordered a coffee and some snacks and was introduced to Maria's husband and daughter. Maria had only attended primary school but she loved learning. She seized every possible opportunity to practise her English and, for the moment, I was it.

I learnt that only a handful of tourists passed through Lenga each year, that the weather had become very haphazard and that the government had little impact on the daily lives of the people. Maria had ambitions for a better life and was working hard to achieve them. I was very impressed by her energy and positivity. 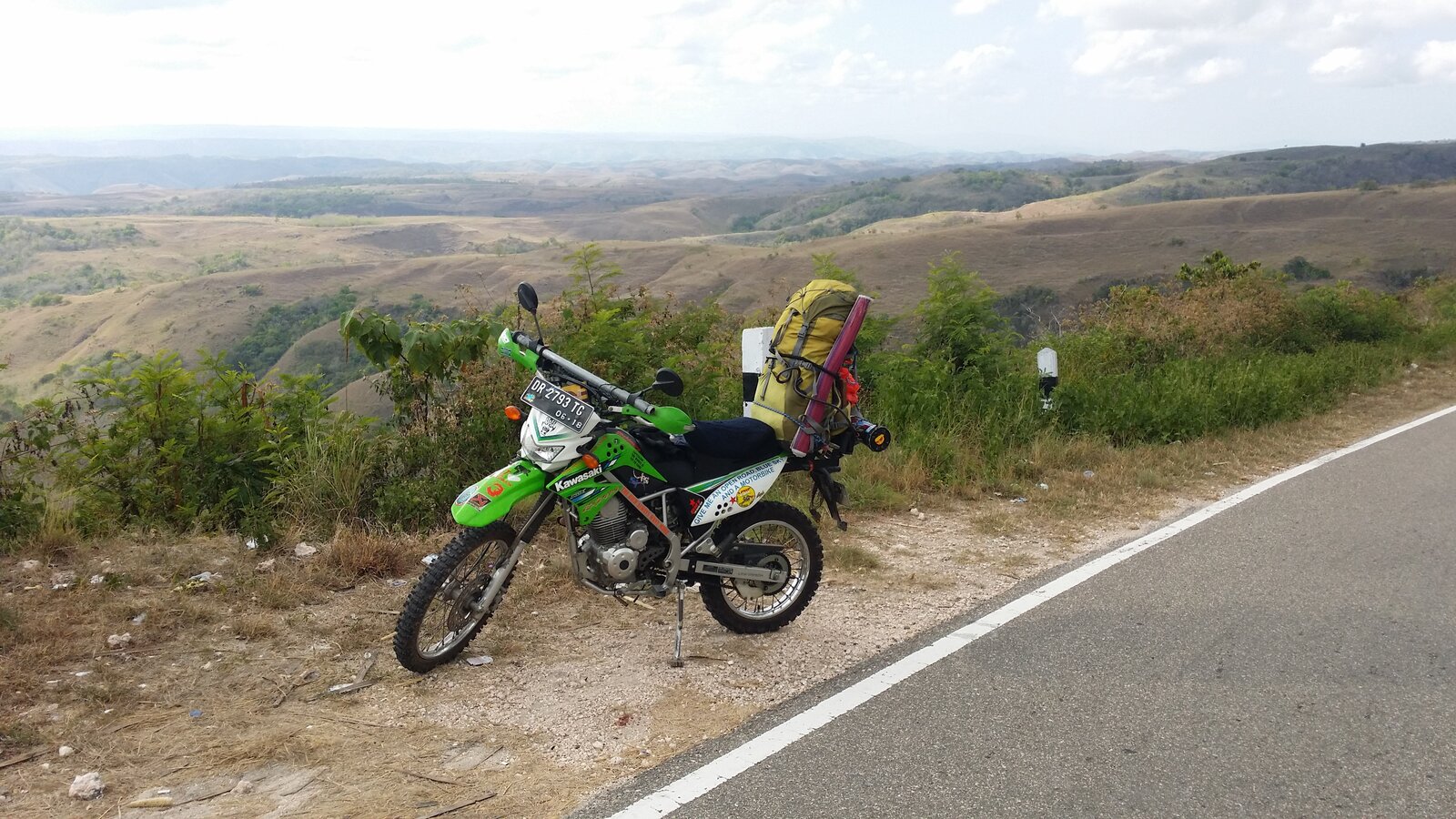 Back on the road again I passed through the large regional centre of Waikabubak and thirty minutes later reached Waitabula where I had lunch in a small, busy cafe. The young woman opposite said grace before and after her meal - a gesture I had not seen in decades. 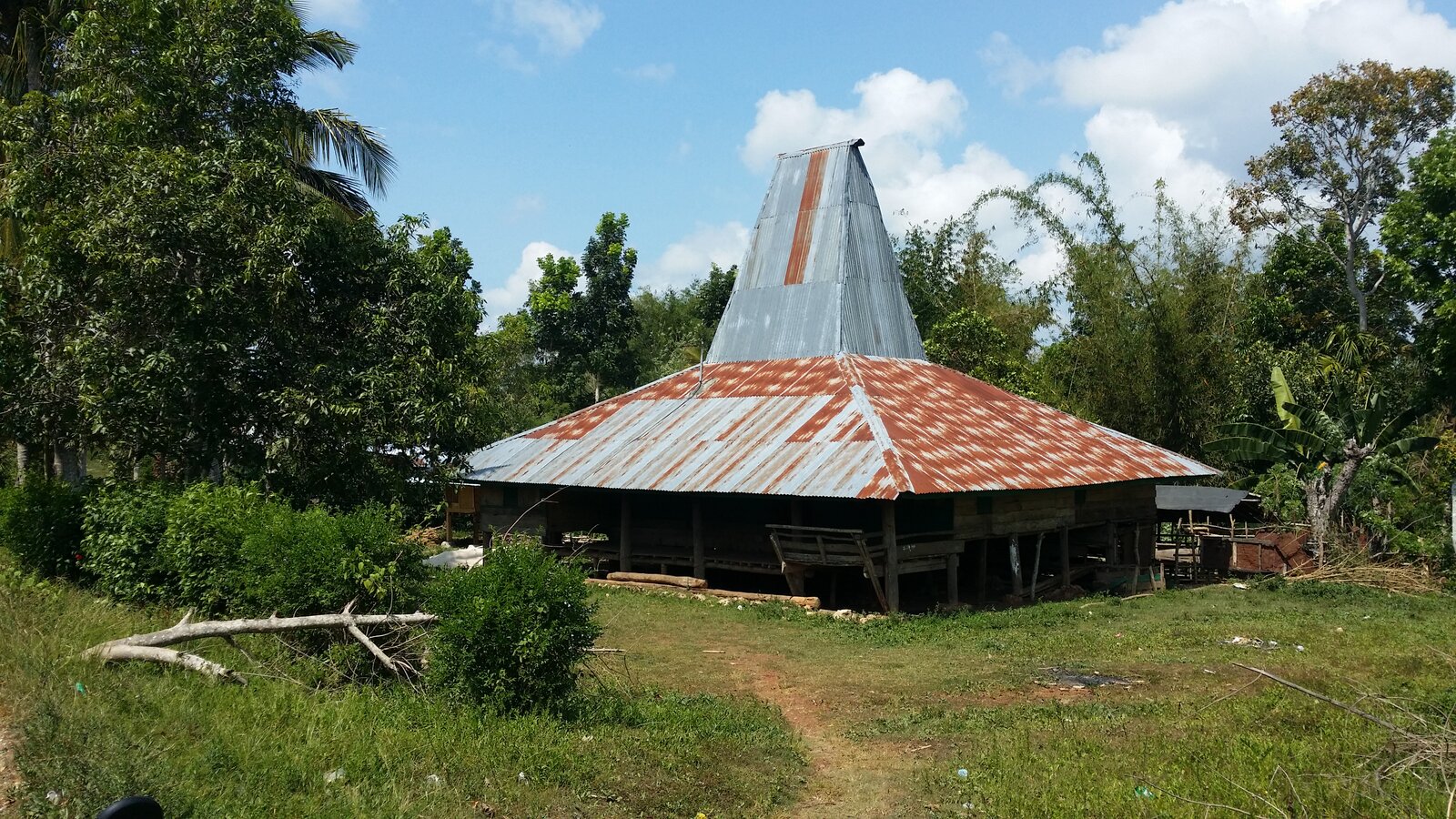 Waitabula boasted one hotel. Located on a busy street in the middle of a strip of shop houses it lacked any sort of appeal so, I struck out for the port of Waikelo a few kilometres away.

The road traversed scrubby country; good for goats and not much else. Windswept, rock-strewn flats played host to the ubiquitous remiga plant, grey-leafed saltbush and spinifex. A few ramshackle houses clung to the roadside as if seeking protection from the hostile landscape. Constructed from grey breeze blocks they looked as if they'd been slapped up by a builder suffering the DTs!

I crested a sharp rise and beheld a glorious vista; the azure ocean glinting and blinking beneath the afternoon sun. A brace of small freighters were tired up and just offshore another rusty workhorse waited patiently for a berth. The ferry berth was empty. 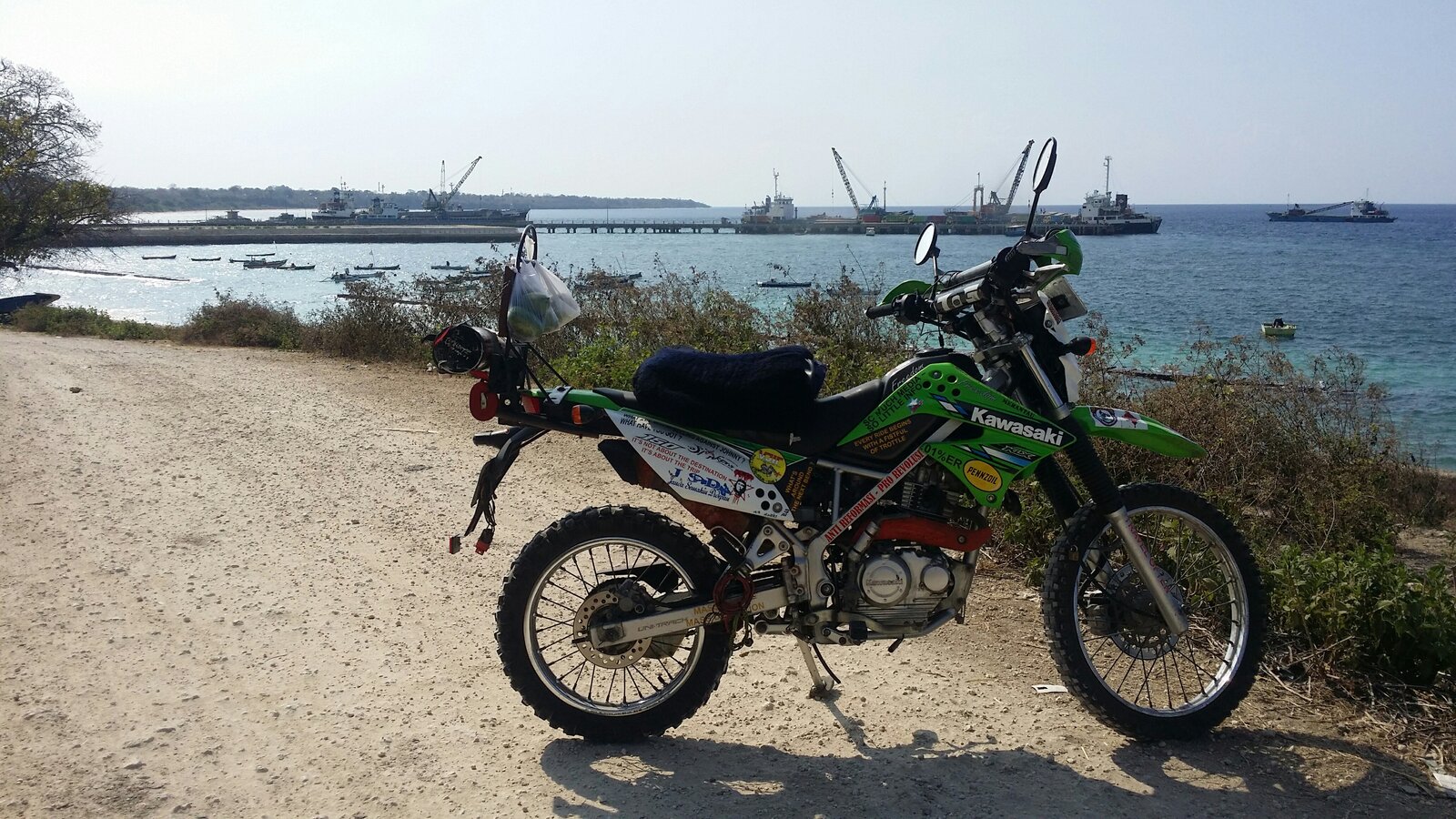 I dismounted at the tiny ticket office. The news was uncertain. "The ferry might arrive tomorrow morning ... or, maybe the next day. The engine is broken." There was nothing for it but to look for lodgings.

I resigned myself to spending the night in Waitabula's only hotel but then Lady Luck played her hand. Just as I was turning right onto the main road, out of the corner of my eye, I spotted a small signboard nailed to a tree: "Redemptorist Villa and Conference Centre. 300 mts."

I turned left onto a gravel track that wound gently down to the shoreline. I pulled up in the sandy yard. A large smiling woman came to greet me. Juliana explained that I could only stay two nights as a conference was scheduled. Perfect. The wood and bamboo buildings were well-constructed and sat atop a coral outcrop overlooking the sea. It was a great spot from which to look for the arrival of the ferry.
I made myself at home unpacked and showered. My room was a large dorm containing eight beds - I had it to myself.

Waikelo is a hamlet - no more, no less. There were a few shops, some houses and little else. I decided to go for a run. Further along the coast, to the east, I could see another ferry dock so I headed in that direction. I chugged along through the late afternoon heat passing the occasional grey breeze block home built without the aid of string line or spirit level. Each sported a yellow plastic 5000 litre water tank.

I ran through the open gate of the ferry complex. The terminal building looked quite new but it had been extensively vandalised. Broken glass and smashed tiles littered the floor. Doors had been kicked in and the walls were liberally splashed with teenage graffiti. It was a total mess. 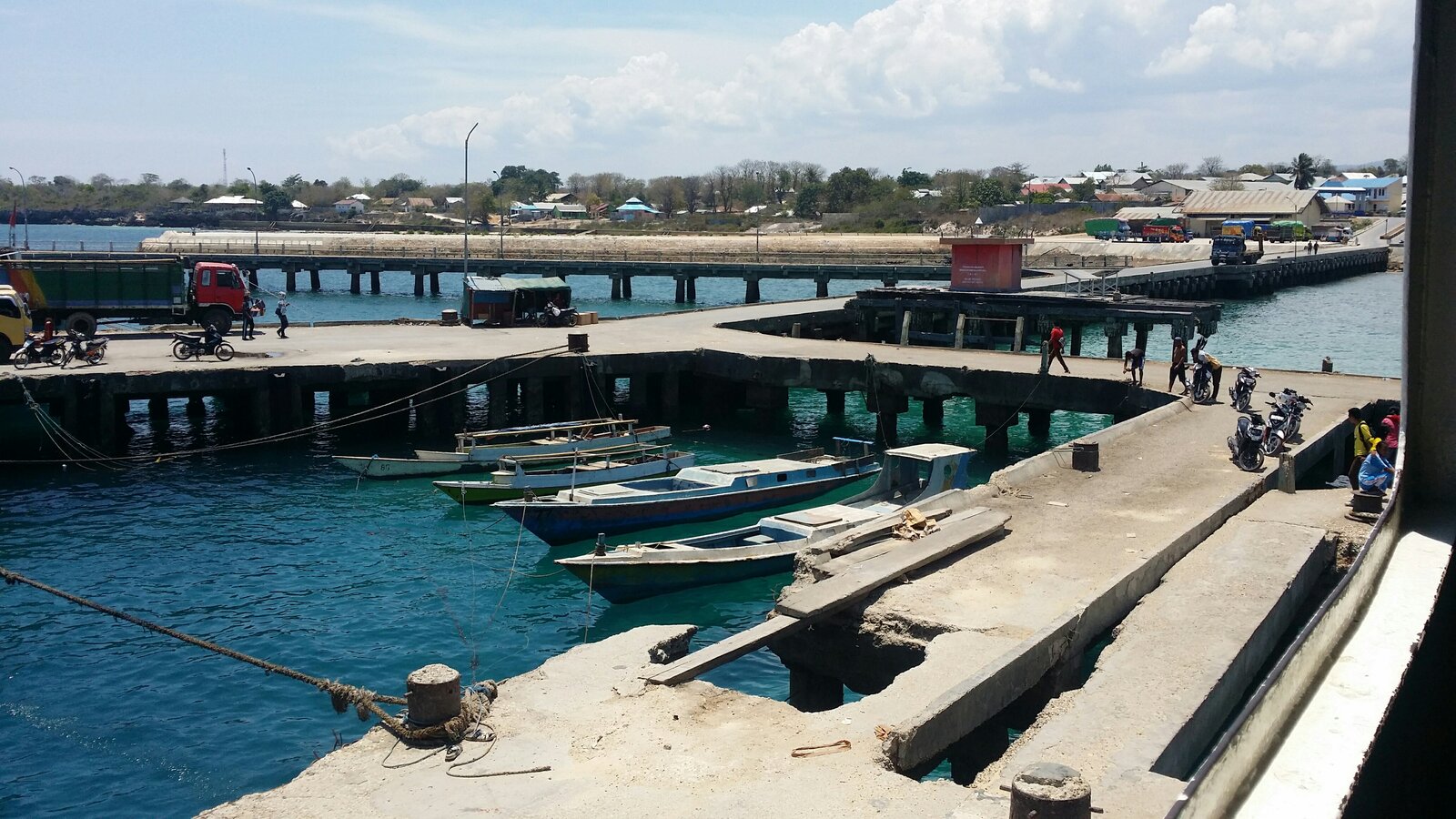 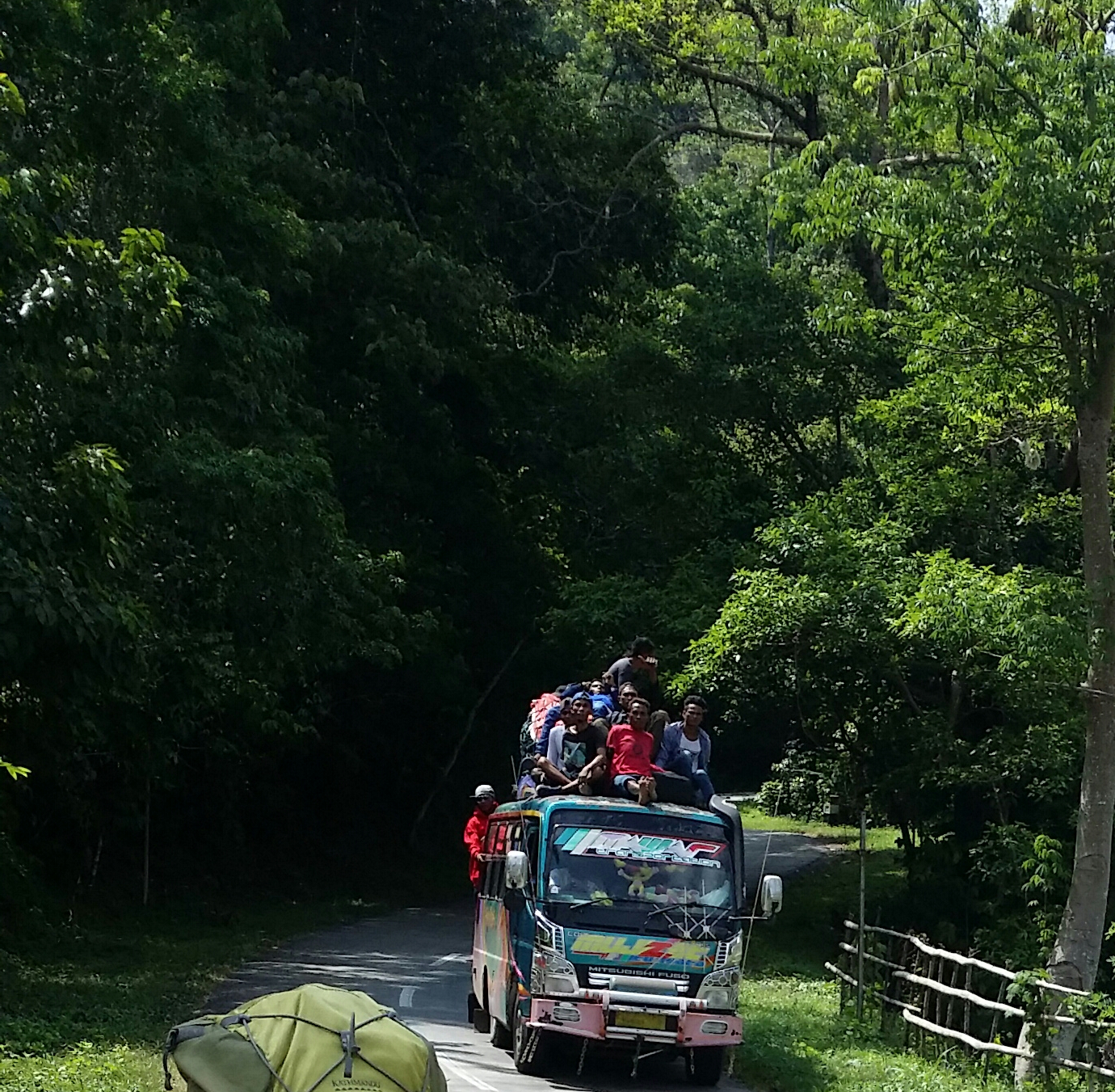 I made my way to the loading ramp. It was a smashed and twisted wreck. A solitary fisherman told the story: the year before, in a heavy monsoon storm that had "appeared out of nowhere", a ferry had been smashed into the ramp by an enormous wave. He didn't know why the ramp hadn't been repaired.

Back at base I watched a magnificent sunset bathe the sky in reds and oranges. Later I dined on a beautifully prepared dinner of fish and spicy stir fried vegetables washed down with cups of coffee. The black night watched over a tranquil sea, the swish of waves against the breakwater, the only sound. The balmy night air, the lit-up freighters at the dock, the smell of the sea and a full belly completed the scene - the only thing missing was the lights of a ferry approaching from across the western horizon. 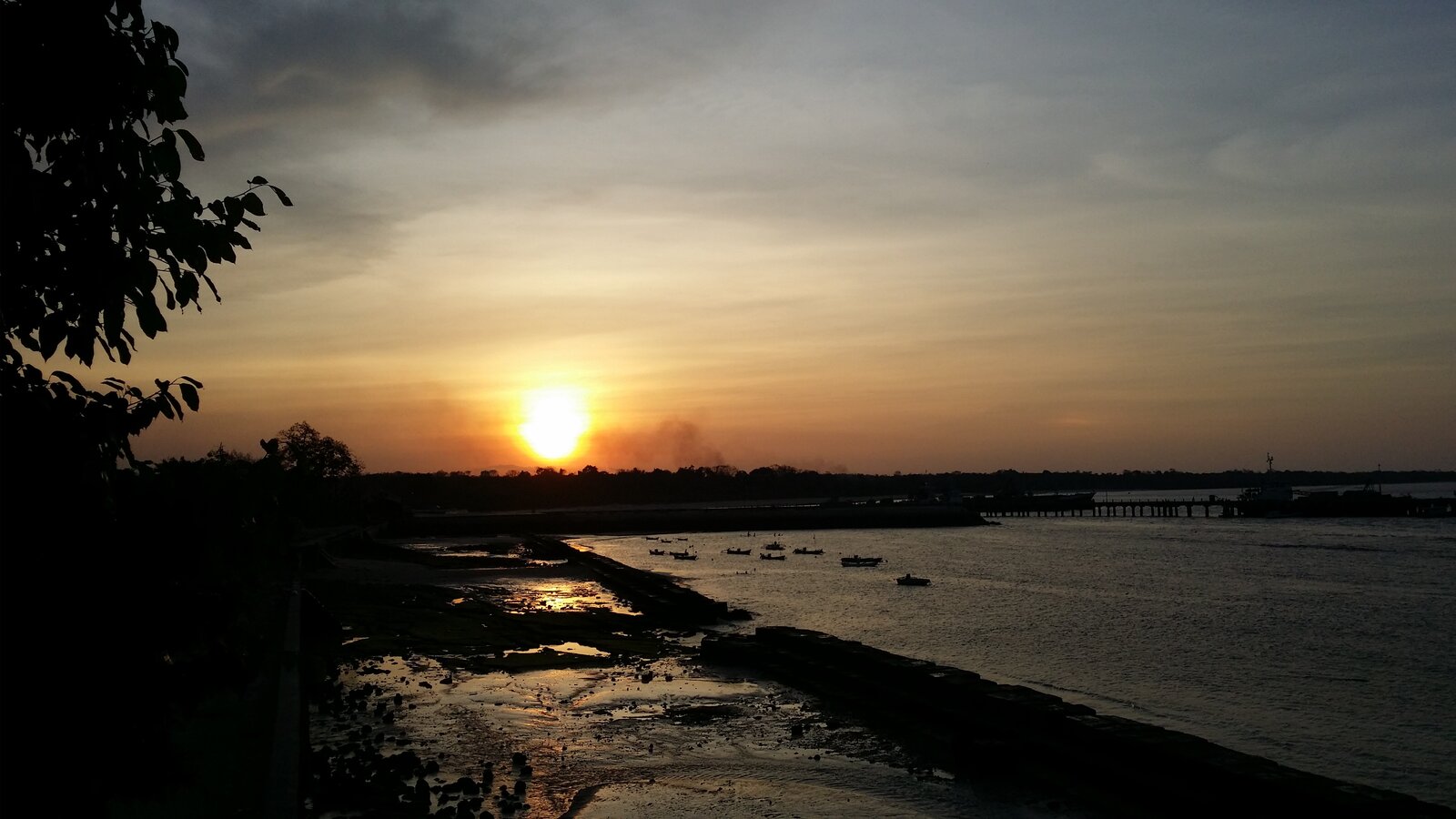 Morning. No ferry had arrived. I went for a ride to nearby Kodi and spent a few hours at the Sumba Cultural Centre. The initiative of local priest Father Robert, it was dedicated to preserving local culture and traditions. Father Robert showed me around the fabulous collection of textiles, weapons, masks, bone and ivory carvings, head dressings, jewellery and household items. 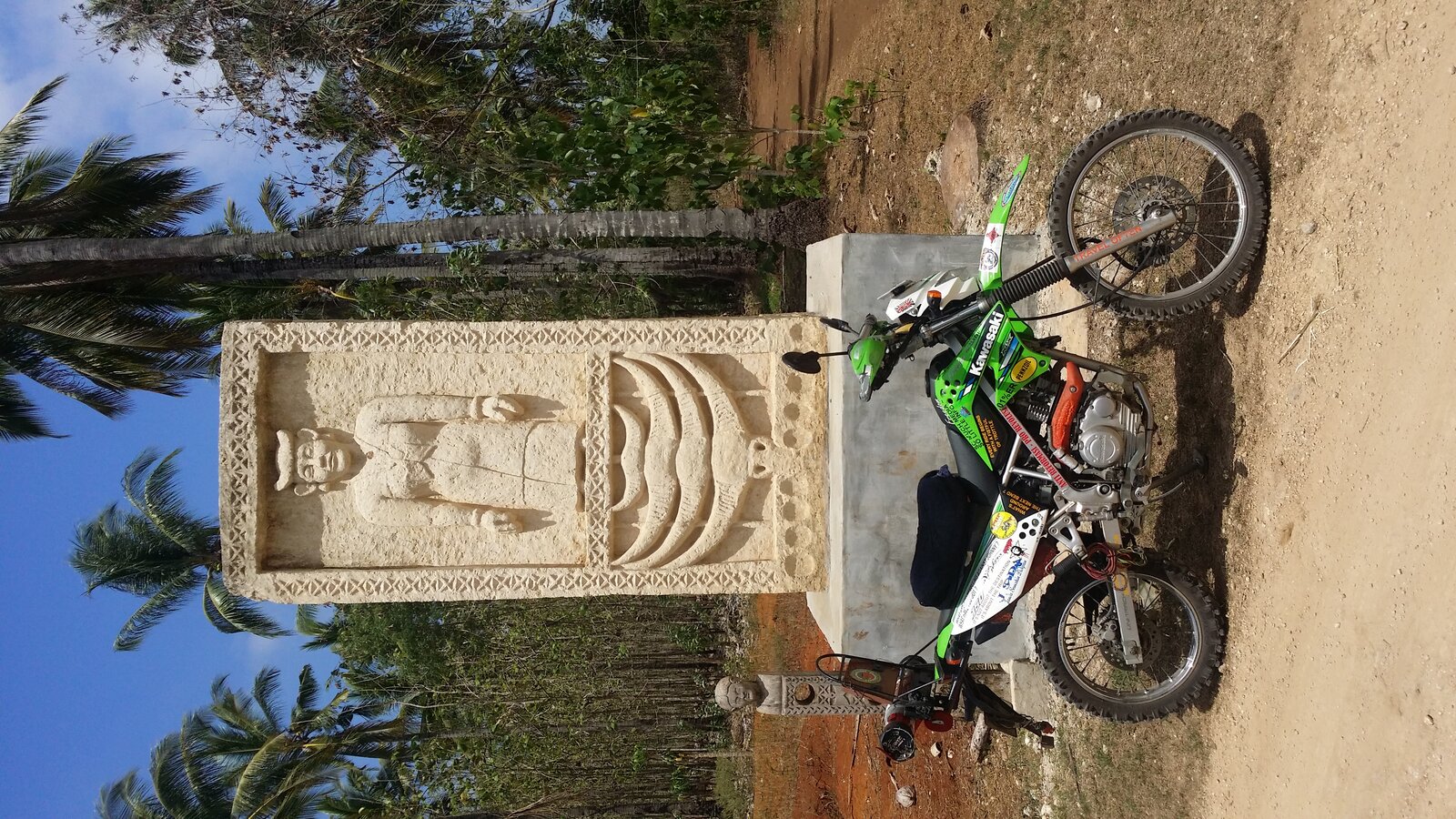 Photos adorned the walls. There were marappu priests conducting divination ceremonies which involved examining the livers of slaughtered animals. Others showed hundreds of men dragging massive slabs of rock to place across the graves of deceased nobles. This was indeed a still-living, ancient culture, albeit under threat from the modern world. Father Robert was doing his best to record and preserve it "just in case". He voiced his dismay at the lack of understanding, and sometimes direct hostility, he received from his fellow priests. He was indeed a very noble man, passionate about his island, his people and their traditions.

That night I witnessed another brilliant sunset. After another slap-up dinner I spent the evening reading and scanning westwards for tell-tale lights which never appeared. I hit the sack after eleven lulled to sleep by the swish of the waves. I slept lightly however and, each time I woke I'd slip outside searching for the ferry - in vain.

When I woke again the sun was already climbing a blue sky stairway. I stepped outside and there she was tied up to the dock, ramp down. Juliana readied breakfast - the word was the ferry would leave at 9am. I bade goodbye and fired up the bike. I took one last look at Juliana through my rear view mirror. She was still waving as I exited the gates. 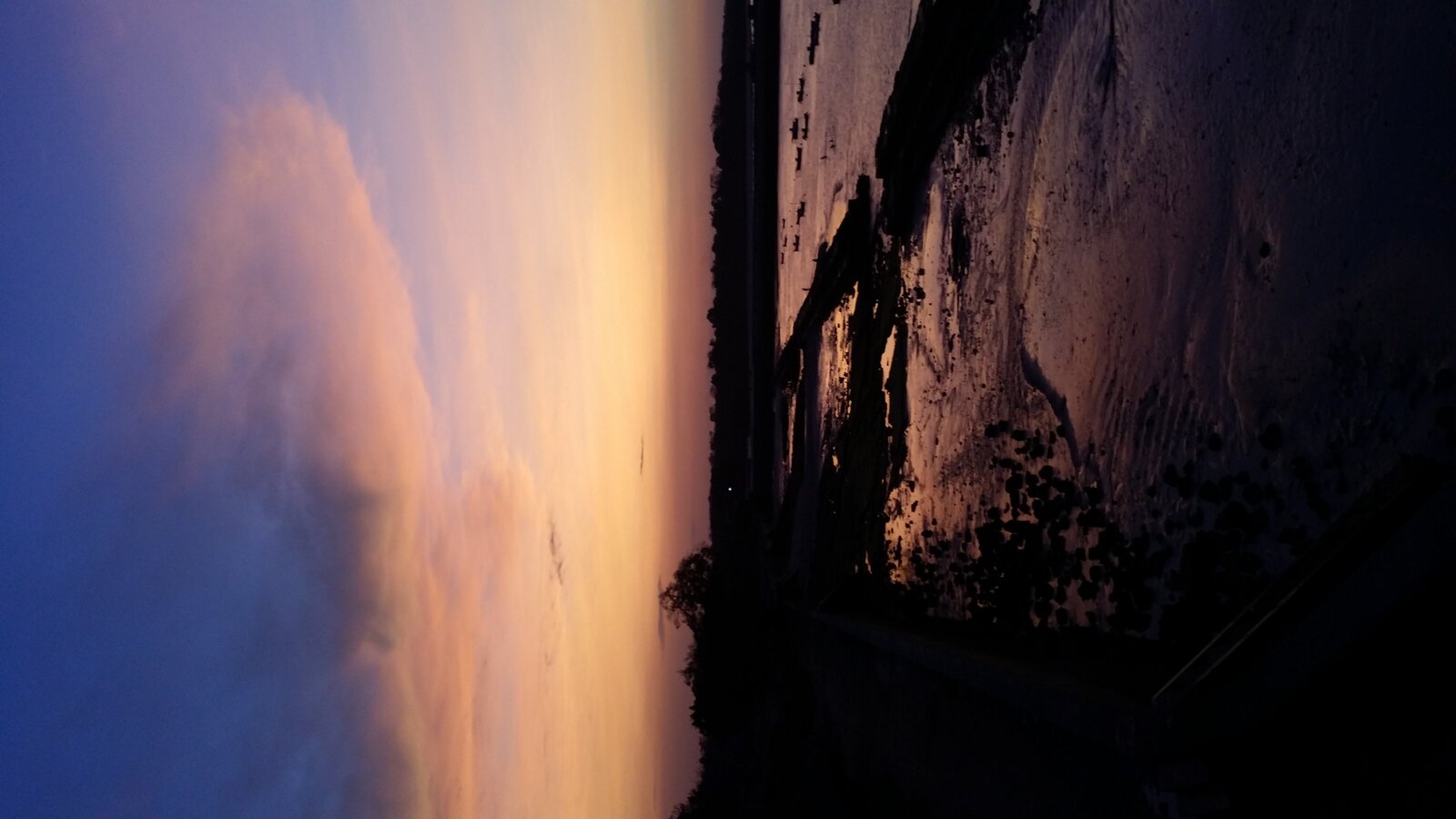 Down at the dock a line of trucks waited to depart. They were carrying cashew nuts to Sumbawa. Their drivers squatted by the roadside smoking. Patience was their long suit, resignation their default position. I joined them for a coffee at a ramshackle stall. Time passed. More coffee, more smokes. 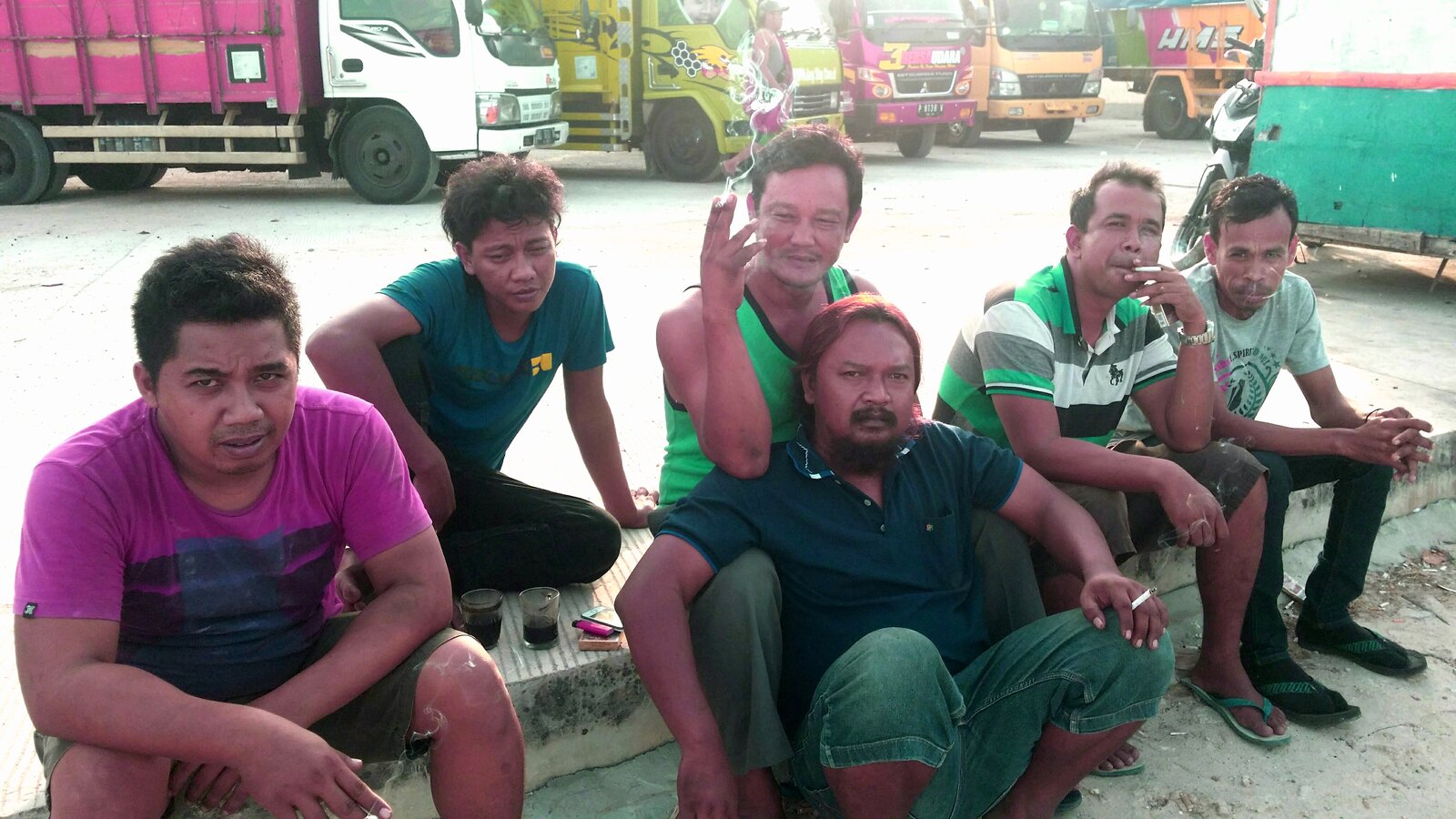 Then, around eleven, the loadmasters gave us the signal. The roughest-looking of this gang of desperadoes insisted on paying for me which goes to prove that old adage: you can't judge a ... 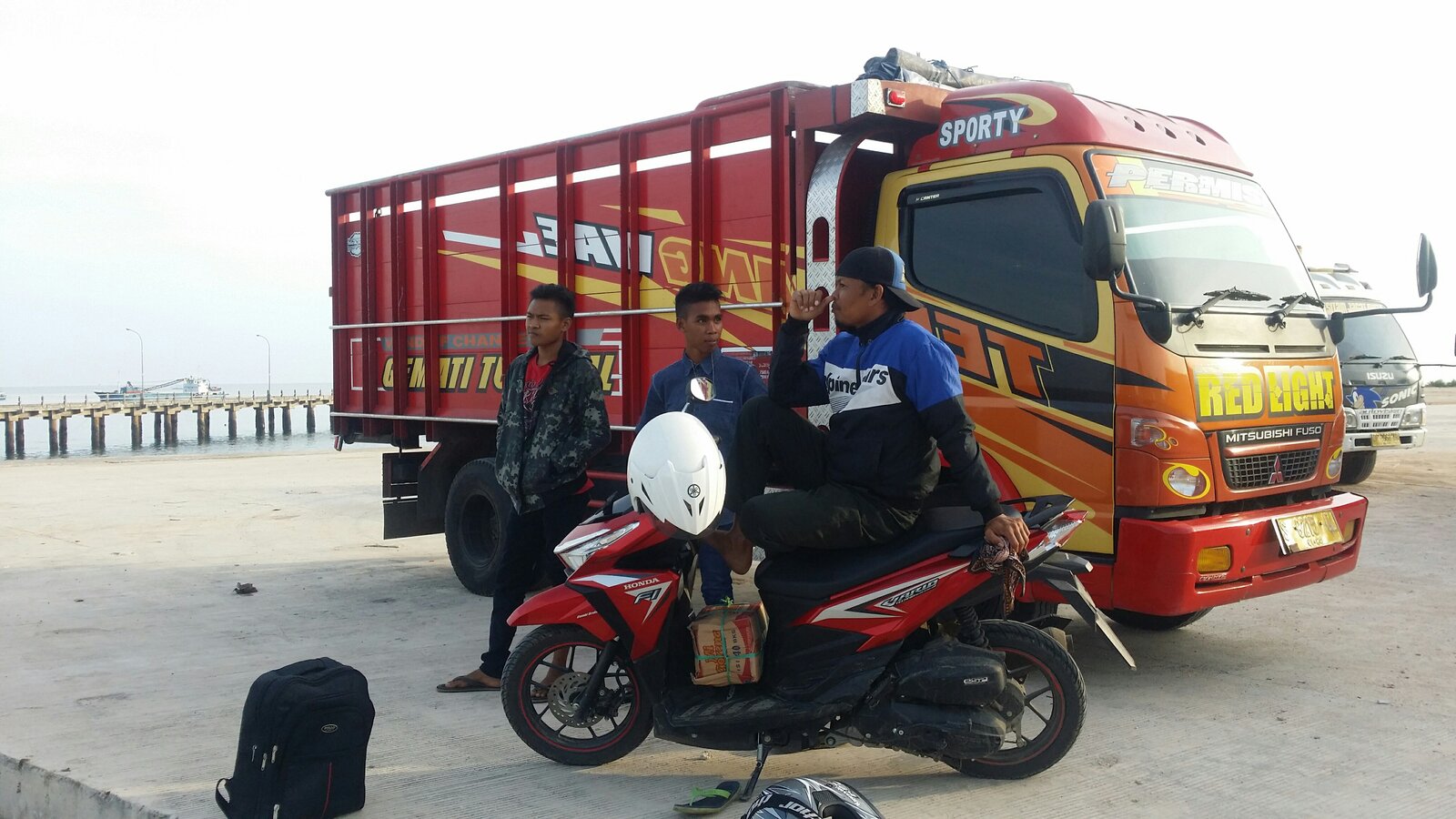 We cast off just on midday. The port of Sape in east Sumbawa was eight hours distant. I'd met Sumba at the end of a three week circuit that had taken me from Lombok east to Kupang and then back west. For the moment, I'd run out of that most precious of all commodities - time left on my visa. There were many aspects of Sumba still to explore - pristine beaches, fortified mountain redoubts, river valleys and the wild south coast. I'd had a taste but wanted more. So, as the little port of Waikelo faded in the distance I made a vow: "Sumba, you haven't seen the last of me. I shall return. Promise." 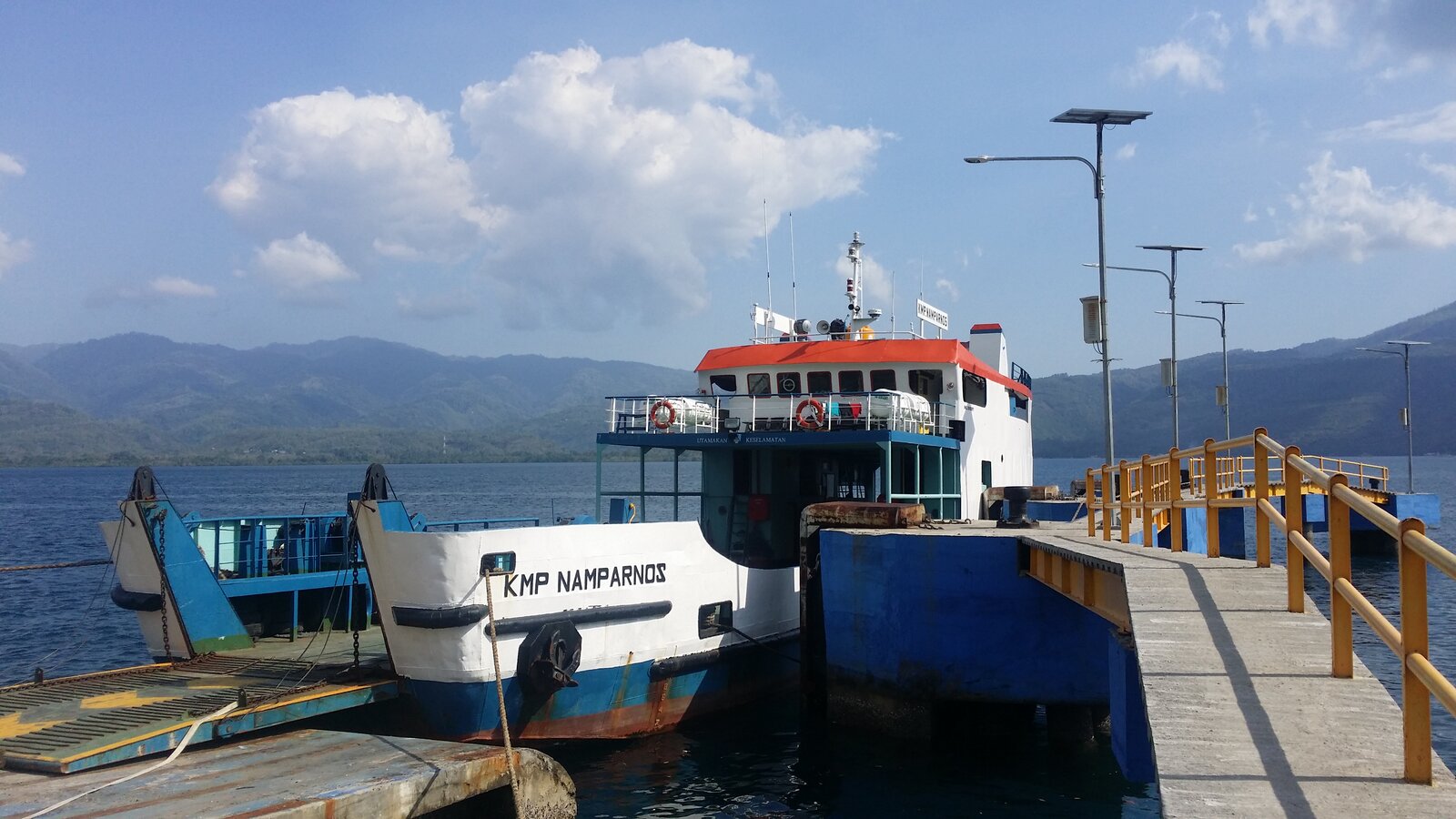