This is officially unconfirmed and none of the Laos new agencies have this reported yet, but there are rumors of 50 LPA (Laos Peoples Army - Government forces) dead from Hmong insurgent & now a 8pm curfew in the Phonsavan area.


I just received this email from another source confirming this too:

Over 50 LPA dead. Even the new army base on Boum Long, the big mountain east of Yodt Phair, was attacked.

Yep , Confirmed. around Nam Siem , on the Long Chien Track out of XK according to them, still going on. Other areas around Xieng Kouang ( the Laos province containing Phonsavan) too."

STAY AWAY FROM THE PHONSAVAN REGION FOR A WHILE 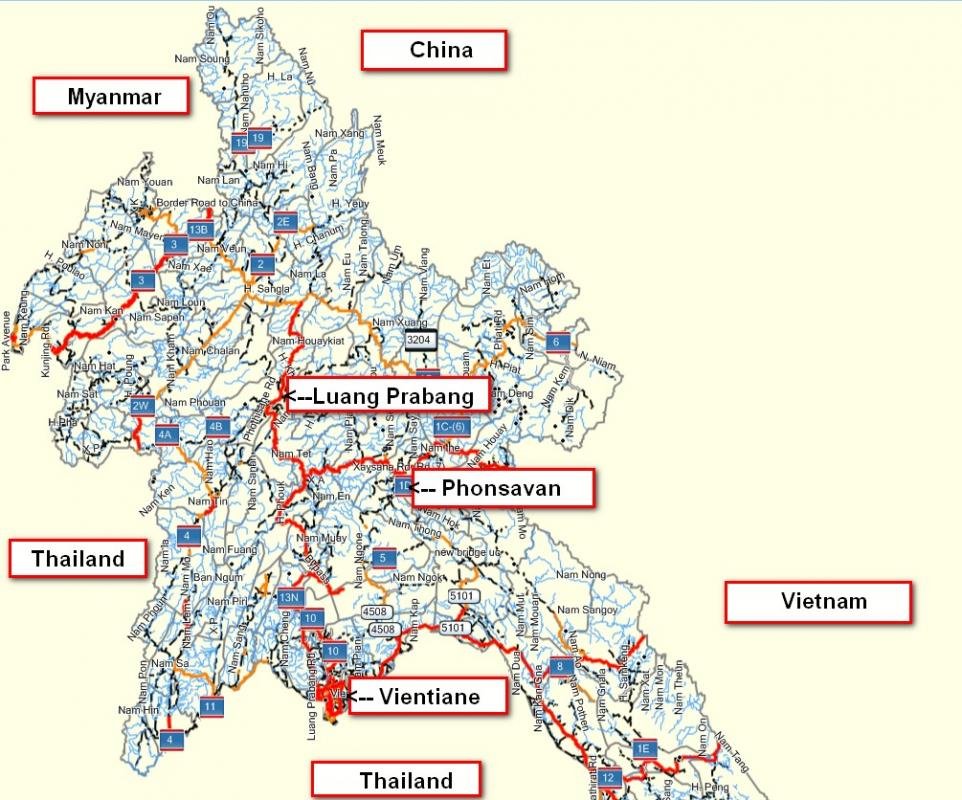 Apparently a bridge has been destroyed around Phonsavan, the Laos military are saying a truck did it, but there is no sign of a truck.

They have 21 weeks to get their shit sorted as I'm not changing my trip now.
B

Leave the bridges alone! Focus more on the paved roads...Like all of them!

Midnite mentioned this area back in April as a no go.

Just spoke to the Vansana plain of jars Hotel in Phonsavan, they say there is still a curfew in force by the military now 10pm (July 9th, 2012).

Another top end hotel in Phonsavan just told me the guests have to be back in the hotel by 2130 (9 30pm), I asked the reason, they said "some problems in the countryside".

Yes, just got word from a friend that they are fighting in the Xaysomboun area near the Phou Bia mine. However. However, many people in Vientiane and I guess also in other areas have not heard about it. No specific information but it seems that they are still fighting and the problems have not yet been solved. Some people in XK think that promises, made to fighters who gave themselves up, have not been fulfilled and that might be the reason why they have taken up arms again. My friend will try to keep me updated.

Some interesting information on the situation with the Hmong in Xaisomboun Special Zone (south of Phonsavan) in the link below:

On the 4[SUP]th[/SUP] of June 2005, a group of 171 people (20 Hmong and 9 Khmu families with 83 adults and 88 children) emerged from the forest and put themselves in the hands of a government police officer in the Saisomboun Special Zone, north of Vientiane province. Their arrival had been well publicised as one of the few rebel groups that voluntarily surrendered. Government troops of the Lao People's Democratic Republic (Lao PDR) and other officials were soon on the scene, including four US citizens from the Fact Finding Commission, a lobby group based in California, USA. The US visitors were there to witness the rallying and to ensure that the group was given all the help they needed after spending 30 years in the jungle of central Laos refusing to be part of the Lao communist regime. The Americans were promptly arrested for "liaising illegally" with the Hmong, but were released and deported a few days later after diplomatic discussion between the two countries (BBC News, World Edition, 7 June 2005).
The new arrivals were taken a few hours later by military trucks to Phu Kout in Xieng Khouang province where they were allocated 50 hectares of farm land and other forms of emergency assistance, with local officials welcoming them "as a gesture of appreciation for their support to (sic) the government's policy of alleviating poverty", according to Vientiane Times, the official English language newspaper (http://www.vientianetimes.org.la/Contents/2005-107/Phou.htm). For the Lao authorities, the Hmong families coming out of the jungle were no more than villagers on the move in search of new farming land. There was no question of rebellion or resistance.
On the other side of the globe, however, the U.N. Secretary-General Kofi Annan, on 7 June 2005 in New York, welcomed reports on the humane treatment extended to "Hmong, coming out of remote areas of Laos" and urged the Vientiane government to continue providing the necessary assistance to them in case a larger number decide to follow in the days ahead. The Secretary-General said the UN was ready to provide every kind of humanitarian assistance to such groups the Lao government may request (News Updated, Tuesday 12 July 2005 at http://news.webindia123.com/news/showdetails.asp?id=86608&cat=World). This is the first time, the UN made any public acknowledgement of the existence of Hmong rebels in Laos.
Meanwhile, a television report in France entitled "The Secret War in Laos" was broadcast on 16 June 2005 on France Channel 2 (http://info.france2.fr/emissions/73095-fr.php). It shows a campaign of "ferocious repression, even extermination" conducted for the last three decades by the leaders of the one-party state of the Lao PDR against thousands of Hmong in the jungle of Saisomboun and Bolikhamsay province (Lao Movement for Human Rights, "Petition to Save the Hmong in Saisomboun" at http://www.mldh-lao.org/petition_online/petition1.php). A Lao Foreign Ministry spokesman, Mr Yong Chanthalansy, dismissed the televised report as an attempt to "make something out of nothing", claiming that there were no rebels in Laos and that the two French reporters had been mislead by "bad people" ("khaun-bordi") to invent the report (Lao Language Program, Radio Free Asia, 26 June 2005).
Ever since 1975 when the communist Pathet Lao (Lao Nation) gained control of Laos with the support of the then Soviet Union and North Vietnam, reports have continued to circulate about the exploits and suffering of many thousands of Hmong resistance fighters in remote jungles of that country. Initially they saw themselves as part of a rather ill-coordinated liberation movement to bring back democracy and non-communist rule to the country. After many years with little progress, this mission was changed in the last five years to one where the few small groups who remain, are simply fighting for survival as remnants of the so-called "secret army" which the American Central Intelligence Agency (CIA) recruited and supported during the Lao civil war from 1961 to 1973 (Conboy, 1995 and Warner, 1998). They now see their plight as the legacy of their involvement as members or descendants of the members of this CIA "secret army" and are thus targeted for extermination by the new communist regime.
This paper will focus on the Hmong and their armed resistance in Laos. It will begin with a short overview of the Hmong and their past armed rebellions. I will then discuss the current situation by looking at the internal and external factors and groups involved, before concluding on what will be the likely future of Hmong armed resistance in that country. In a sense, the Hmong cannot be said to be rebels against the Lao PDR government, as these dissidents have never joined the new regime and raise up against it from within its own ranks. Rather, they have chosen to resist the new communist rule by being fiercely anti-communist and by isolating themselves in their mountain fastnesses, refusing to be under the control of the new authorities.

Conclusion
The Lao PDR government has tried hard to blame the political instability in Laos on overseas Hmong, not local Hmong inside Laos whose dissidents have so far been officially labelled only as "bandits". It has tried quietly to solve the problem of local Hmong resistance in the backwaters of its jungles in northern Laos. It has tried to deny that such resistance groups exist rather than acknowledging them for what they are. It has made prominent reference in the country's Constitution to ethnic minorities as inseparable groups in the make-up of the Lao nation's unity who are accorded equal rights and obligations. It established the Saisomboun Special Zone as a show-case development site for the Hmong to attract Hmong rebels. There are now Hmong district and provincial governors, Hmong deputies in the National Assembly and even two Hmong Ministers (one as Minister for rural development and one as Minister for Justice) in the 2008 Lao government. Many Hmong are now in middle management in the Lao public service, more than under the old right-wing Royal Lao Government. A group of Lao soldiers who arrested and killed a number of Hmong civilians in 2002 in Saisomboun were reportedly executed by their local commander in front of survivors as an example of what is not allowed by the Lao government.
Apart from political differences, there seems to be other equally important factors involved in the equation, including racial discrimination of ethnic minorities by private Lao citizens, poverty and high inflation, ripe official graft and corruption, lack of economic and employment opportunities leading people to be easily susceptible to alternative political propaganda, resentment for lack of promotion and forced retirement of Hmong communist party supporters, alleged framing of Hmong officials for drug trafficking and other crimes leading to their arrests and imprisonment to deprive the Hmong of their leadership, murder and mysterious disappearances of repatriated Hmong refugee leaders and resistance leaders who rallied to the Lao PDR government.
These factors, together with free-for-all political propaganda (by word of mouth or radio broadcast) and material support from the diaspora Hmong outside Laos, will continue to make it difficult for the Hmong resistance fighters to stop their activities and for the Lao government to pacify them. This is now especially the case when the issue has been well played into the hands of the United Nations, the world media and international human rights organisations which have been keeping a close watch on anything to do with the Hmong and human rights abuses in Laos.
Regardless of this continuing impasse between the Lao government and the Hmong resistance movement, we need to keep the problem in perspective. There are currently 460,000 Hmong living in Laos according to the 2005 Lao government census. Of this number, less than 1,000 are now actively involved in the resistance, and their number ebbs and flows according to their fortune and the action of the Lao government at any particular time. The number may be small, but the Lao authorities will need to resolve many of the causes of this discontent. The problem is real and cannot be ignored or simply stemmed out by force as there are many underlying social, political and economic factors involved, not just ideological differences. So long as these needs are not addressed, even if existing insurgent groups are stemmed out, new ones will rise up to show their displeasure in one form or another. Resettlement as has been done in Muong Kao (Bolikhamsay province), Saisomboun and Muong Mok (Xieng Khouang) is a constructive and peaceful response to the problem, and is indicative of a cool and clear-headed approach. The government should be commended for stopping its previous use of armed retaliations and turning to rural development instead. This is the only way that will promote cooperation and trust between those involved in this long-standing conflict.

Just got this from a Lao Forum:

I have recieved a number of reports of disturbances in Xieng Kuang.

It seems that Hmong groups have been fighting the military. Soldiers
have been killed. A petrol station was attacked. A bridge was blown
up ...

These are the things I am being told, but I don't know how accurate
they are. One thing is sure: there is a curfew in Phonsavanh.
Foreigners need to be in their hotels after 8 pm.

I am sure this is a concern for many people in the development
community. There are a lot of projects and staff in Xieng Khuang. We
need facts, not rumours... so please share hard information if you
have got it. I doubt if the Vientiane Times will be giving us the
full story.

(But for those who enjoy speculation... do you think it is a
coincidence that Hillary Clinton will be arriving in Laos this week?)

I don't think Hilary will be going to see the jars.

I guess it is all over