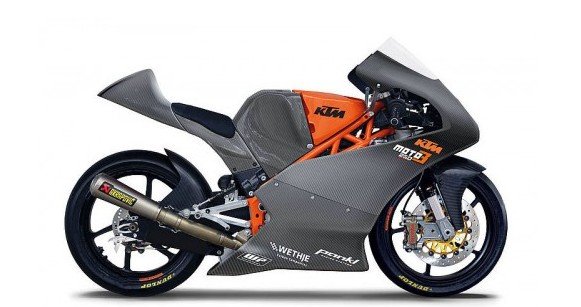 KTM has begun accepting orders for a production racer version of its 250cc Moto3 World Championship race bike. The production racer will be available in February 2013 though orders will be accepted from July 1 to Oct. 1 of 2012 for 45,000 euros (US$55,400).
The 2013 KTM Moto3 250 GPR offers similar specifications to the Moto3 bike including the one ridden by current series leader Sandro Cortese. The production racer runs on the same single-cylinder liquid-cooled engine.
Mosts of the differences are ones made to meet Moto3 Grand Prix regulations, namely a 14,000 rpm rev limit, Dell’Orto electronic control unit and an Akrapovic exhaust that screams out at a Moto3-limited 115 dB.
The production racer revs up to 13,500 rpm, uses electronics inherited from the KTM RC8R and has a quieter Akrapovic exhaust. It will also come with lower-spec Brembo brakes and WP suspension and OZ forged aluminum wheels though the GP factory version’s brakes, suspension and magnesium wheels can be purchased separately.
The production racer will also be used in the 2013 Red Bull MotoGP Rookies Cup, a youth racing series that runs during the MotoGP season. The Red Bull Rookies bike will run the same specifications as the GPR but with Red Bull livery.

The production racer may also open up new entries to Moto3 next year. KTM currently has five factory riders in Moto3 with the Kalex team fielding another four on a race bike equipped with the same engine but a different chassis. Pit Beirer, head of KTM’s racing operations, says there will be more KTM and Kalex Moto3 machines in the 2013 season.
“In 2013 we want to increase the power of Orange in the Moto3 World Championship. There will be an addition of four KTM Moto3 bikes, KALEX however stays our exclusive partner with their own chassis development and will be supplied with engines. They also want to lift their contingent of bikes by another two,” says Bierer. “We would also be very pleased if other teams and riders were on the grid for next season’s World Championship riding the KTM production racer. Continuing to support and to supply the Red Bull MotoGP Rookies Cup with four-stroke KTM Moto3 bikes has never come into question. With Danny Kent and Luis Salom, both former Red Bull Rookies, this closes the circle and once again illustrate the successful concepts of the series and our engagement in the support of young talent!”
KTM Moto3 250 GPR (Production Racer 2013) Specifications:
Engine: Single cylinder, liquid cooled / 4-stroke / DOHC
Displacement / Bore x Stroke: 249,5 ccm / 81 x 48,5 mm
Performance: min. 37 kW at 13.000 rpm
Engine speed: max. 13.500 rpm
Front Suspension: WP / DM 45 mm, RCMA3548
Rear Suspension: WP / adjust. length, hydraulic preload
Brakes front/rear: Brembo Radial caliper, 290 / 190 mm single disc
Rims front/rear: OZ Forged Aluminum 2,5 x 17 / 3,5 x 17
Tires front/rear: Dunlop 95/70-17 / 115/70-17
Silencer: Akrapovic Full Titanium System (max. 108 dB)
Frame: Tubular steel with adjust. headstock and swing arm pivot
Dry weight/tank capacity: approx. 83 kg / approx. 11 l (182 pounds / 2.9 US Gallons)
[Source: KTM]