And here we go again. A beautiful day and my son on new bike, the Kawa KLX 150. Started off behind Mae Jo Reservoir and ground our way into the mountain. Good pace, not too fast, not too slow. Then we entered,what we call "Rock Garden Hell", this time from the top and we didn't exactly know, what to expect further down this trail, as in the rainy season everything can change pretty quickly.

About half way into the track, Oskar had issues starting the bike, it would die, all the time and it drained the battery. It became clear, that we had to decide, whether to turn around or keep going. Uphill was not really an option, so we decided to keep going and push the bike thru the dried out creek bed. It was hard work for Oskar and jumped off, sometimes to lend him a hand.

It was hard work, but we got closer to the end of the gnarly part and so we were in good spirits. At some point I decided, to go get a rope in some village. I knew it would take me at least an hour to get out here and the clock was striking 4 just now. I tried to be as fast a possible, but soon I found out the hard way, that this was not going to end good. The trail was so overgrown with reed and the bamboo grove was so low and narrow, there was not getting through without proper tools. I had to turn around and get Oskar, it was 5 by now and we only had a few hours of daylight left to make it out of here.

Then my XR250 started making trouble and would go out every time I would steer to the left. I had to leave my bike behind and walk back towards Oskar. By now it was already 6pm and we tried to get out of this asap. The KLX was parked further up the hill and was left behind in the jungle for a day. We got back to my XR and both tried to keep going, but the bike kept stalling all the time and when it got darker it was , we had to leave this bike behind us as well. It was now a 15km walk to get us back to civilization and by now it was pitch dark here in the Jungle. Luckily I am very good at reading trails even in the dark. Every two or three Kilometers we had a small rest, we ran out of water a long time ago and we didn't bring any food with us. Thirsty and starving we kept marching, still no reception on the phone. It seemed to take forever and we still didn't know if we were on the right trail or not.

Finally about 22hrs00 we reached a wide gravel road that I remembered. Now it was only a couple more Kilometers and we would be safe, but still no reception on the phone. Half an hour later I got finally a call from my wife. I told here our whereabouts and half an hour later we were picked up.

10 am we started, still exhausted from the last day. But the whole family came along to help with clearing the track and getting the bikes. It was a long walk, from where we parked the bike to first bike. My wife collecting as much bamboo shoots as possible, so we should it later some Gaeng Nomai, which we all love so much. The XR started first click, but we left it for now and wanted to get Oskar's bike first as that one was much further down in the jungle. Anothere 2 kms or more we hacked our way thru the never ending reeds and bamboo groves.

Just before reaching the KLX my wife got attacked by about 10 wasps and got stung. Her face got immediately swollen and it was bad pain for some time. Su now pulled the rope and Oskar pushed the bike up and down the trail. 30 minutes later we took a rest just before another hill climb. The swelling from my wife had gone down now, but the pain was still there. We moved relatively fast forward and reached the XR250 in no time.

It started now raining like crazy and I tried to ride the bike back to the car, but it was not an easy task, because still a lot of bush and bamboo blocked the pathway. Roughly one hour late I reached the car. 10 minutes later everyone else arrived. We put my son's bike on the truck and I tried to ride my bike home.

All in all I must say, this was an outstanding experience for everyone and at the end everyone enjoyed a little bit. Off-course the video can't give back what we experienced but at least it gives you some idea 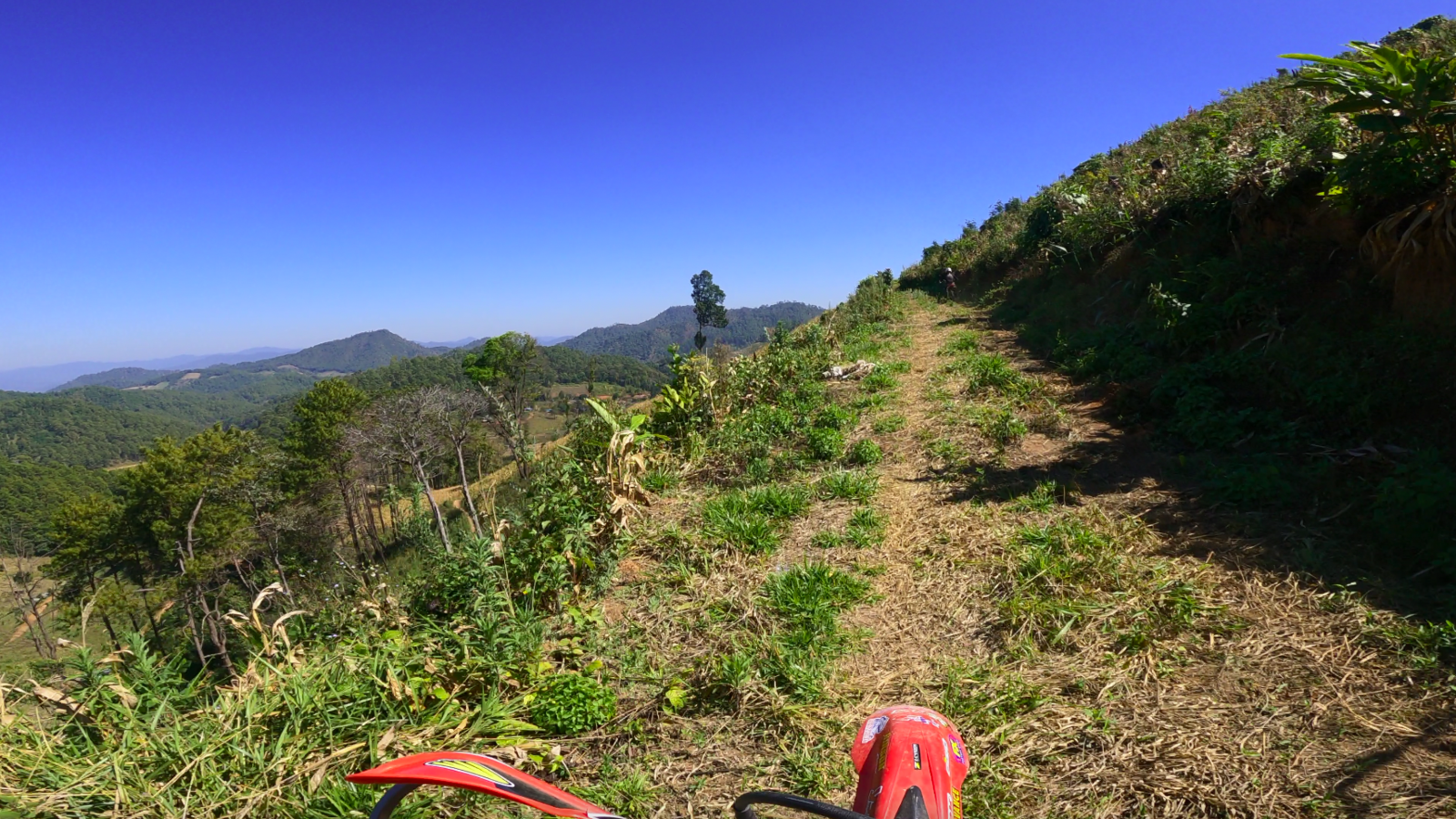 my buddies went to Pai 2 weeks ago and were introduced to a trail called Mt. Doom, all Enduro riders around Pai had claimed nobody so far was able to conquer the giant. So my two friends were the first to achieve this without too much drama. They convinced me to come along and give it a try. So I gave in and I didn't regret a bit. The scenery is stunning and the temperatures left nothing to be desired. Mt. Doom is only about 18 kms long and in my honest opinion not too difficult at all. But it needs some skills and a little bit of confidence. Mistakes up in those heights can be very dangerous. For sure this is not a trail for novice riders, there's a few obstacles that are hard to tackle if you have not enough experience. All in all I had a great time riding three days in Pai. I still missed a little bit of more hard enduro but it was still pretty awesome. The GH we stayed in was 250 Baht a Night, which is also unbelievable good. Hope you enjoy the video of Mt. Doom

So here we go, my son's first race. Grateful to have my friend lend him his bike. A Hengjian KTN 4t. Not being 100 percent fit going to the race with sore arm and legs he managed to get 422 overall from 700 plus riders and 58 in his class. He got a little bit lost at some point and lost about 10 minutes of time there, towards the end he bent the gear shifter and had to finish the race in first gear

Received a call from a mate on Tuesday afternoon. I was asked to go and help search for a mushroom picker of the local community of Papai Ban Pong Mae Jo, Wednesday morning we all met near the temple of Ang Keb Nahm Mae Jo and were met by some government officials and rescue teams and some military units. After a small discussion and planing on a big map, we spread out in many small groups to try to find the missing man, that was missing since Sunday the 19th of June 2022. There must have been around 30 bikes showing up the rest were walking patrols. It took us all day and when we got back in the early evening about 18:30 we were completely knackered and returned without any good news on us. We had to call it a day for today

Last part of our search mission in the neverending jungle of Mae Jo, this trail is refered to Erich's Dinner which derives from Carl's Dinner, the notorious section of Erzberg Rodeo