At around 1100 metres my clutch threw in the towel. A fistful of throttle saw nothing happening at the back wheel. I dismounted and spat on the clutch housing; it was like throwing water onto a hot barbeque plate. What to do? I was stopped at the bottom of what was possibly the steepest stretch yet - maybe 100 metres of humps and bumps, interlaced with holes deep enough to hide an axe murderer's handiwork. Fifteen kilometres along the track up the south-west side of the Mt Tambora massif; fifteen kilometres from help should I need it. And to get back down I still had to traverse two very steep and dangerous crossings of a dry river bed. And so, probably six kilometres short of my destination - Post 3 at 1800 metres - I had a decision to make. Wait an hour, or so, and then press on, or head back towards what might turn out to be a very nasty encounter with the river crossing, one which might leave me stranded anyway. I found the answer in my sweat saturated shirt. Wet from exertion? No, wet from stress! I had to admit defeat and turn back. I took a drink, removed my riding gear and sat down to wait. I consoled myself with the fact that I had already climbed Tambora in 2008. I'd stood on the crater rim, stared into the abyss and then raised my eyes to scan the opposite rim, six and a half kilometres distant. Nearly 200 years before ex-heavyweight champ Muhammed Ali, Tambora had also 'shook up the world'. Ali could bang hard but Tambora out-gunned him. On April 15, 1815 an almighty explosion catapulted 150 cubic kilometres of its innards four kilometres skywards. This cataclysmic event obliterated the Tambora civilisation, whilst, in the Northern Hemisphere, 1816 became known as 'the year without summer.' Crops failed and famine stalked the land with a terrible tenacity. 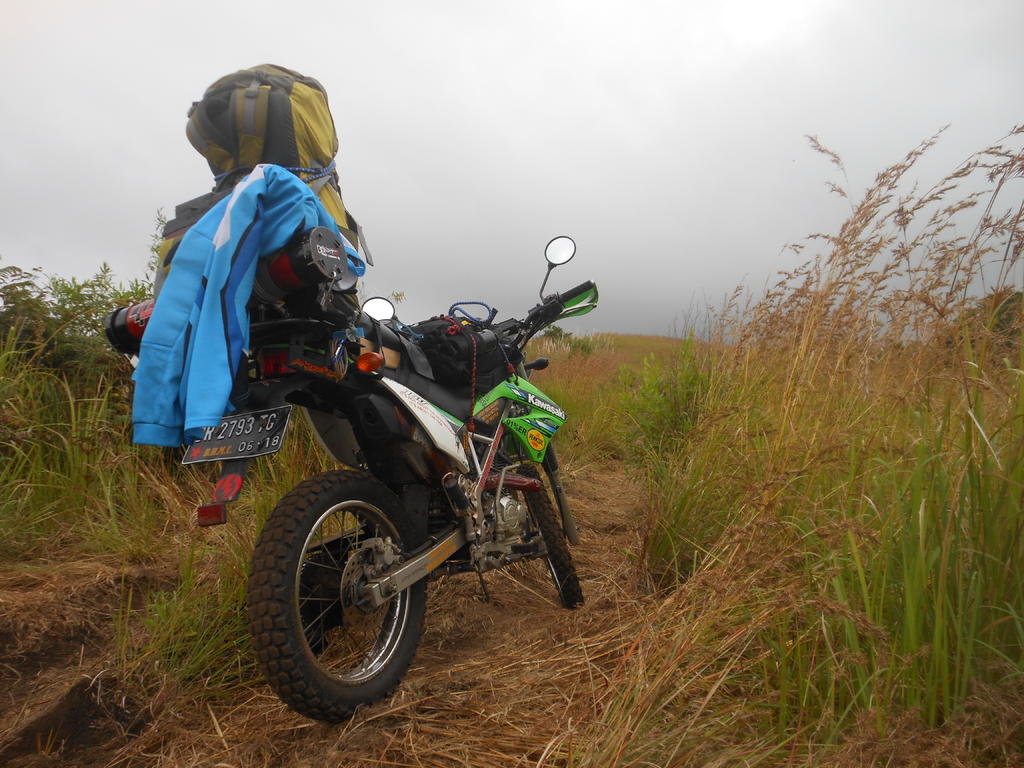 I sat, high on Tambora’s flank and watched warily as the weather began to close in. An eerie mist crept up from below enveloping me in its wraith-like embrace. I might as well have been the last being on earth so complete was the silence. I realised that even if I had made it to the top, I would not be able to see much anyway. Convincing myself of this went some way to assuaging my disappointment at again having failed to reach Post 3. In 2014, I'd made it seven kilometres along the track; this time I'd managed fifteen. Third time lucky maybe? 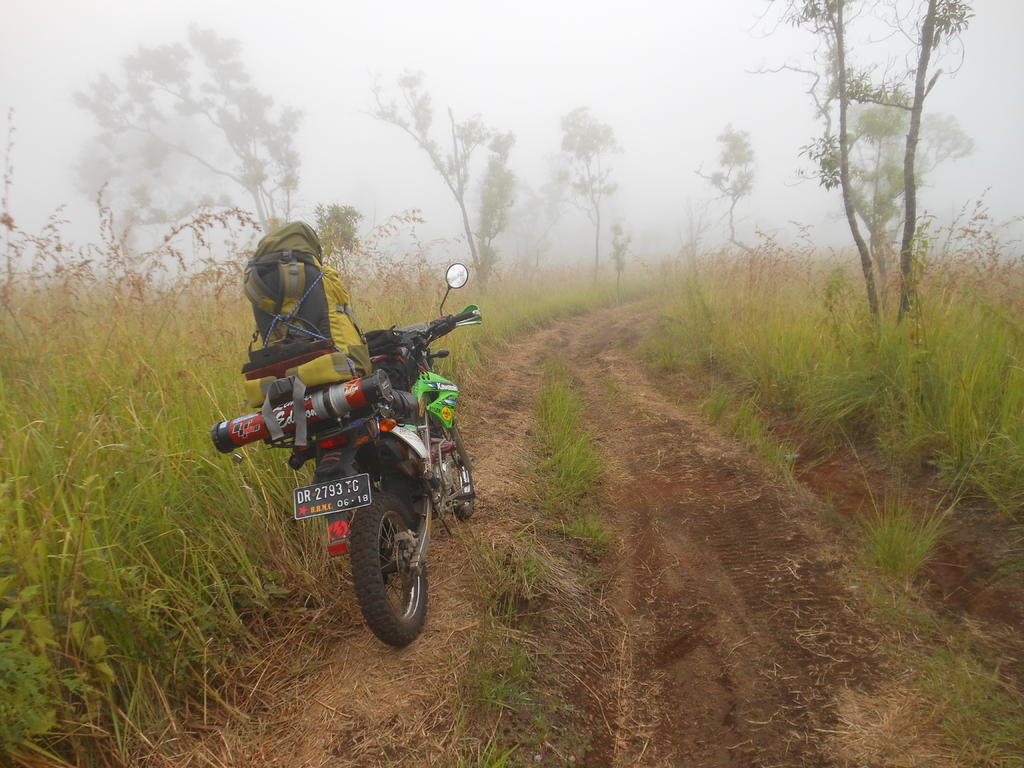 My thoughts turned to the job at hand. Two major obstacles lay between me and safety - the dry river crossings. Even if my clutch held up, there was still the possibility that I might take the wrong line, or, drop the bike. If I lost momentum it may well be nigh impossible to ascend the steep bank from a standing start. Without extra willing hands to give me a push from behind in the sandy going, I could well find myself marooned a long way from help. Such a scenario didn't bear thinking about. It was a bridge I'd cross when, and if, I came to it. 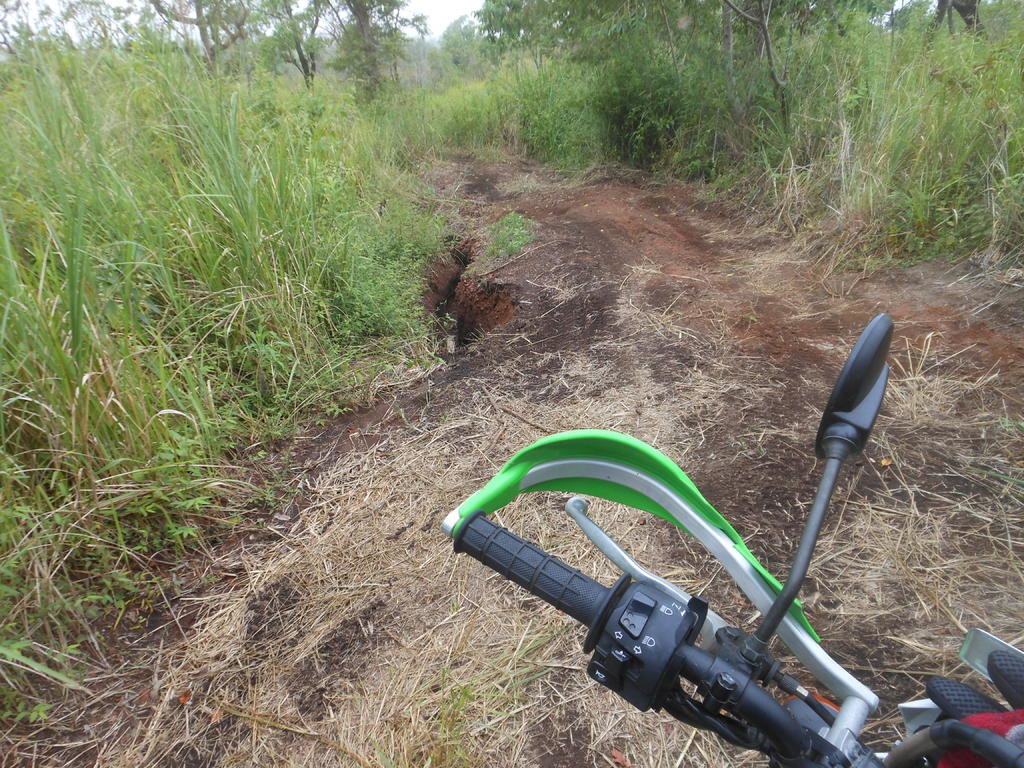 I looked at my watch. An hour had passed. I could rest my hand on the clutch housing. It was time to go. I turned around on the narrow track, the mist swirling around me. I set off, taking it very slowly. I tried to pick the line furthest away from the deep holes that waited to entrap me although, with the twists and turns of the track, this was not easy to do. I managed to stay upright often using my feet as outriggers.. The track was slippery and many of its ridges were not much wider than a tyre. Ten minutes passed. The clutch was holding up; so far, so good. I reached the first river crossing and stopped. It was the easier of the two so, with the axiom: 'He who hesitates is lost', front and centre, I plunged downwards. I was like entering a tunnel. Little light penetrated the heavy foliage above. Fearful of a front wheel washout in deep sand, I went down under heavy rear braking, primed to gun the motor just before the track levelled out. With eyes the size of dinner plates, I tore up the incline and made it out of danger. Post 2, and a break, was only ten minutes away. The second river crossing was the more problematic. If I could just make it onto the large flat rock, two-thirds of the way up the far bank, I felt I would be ok. 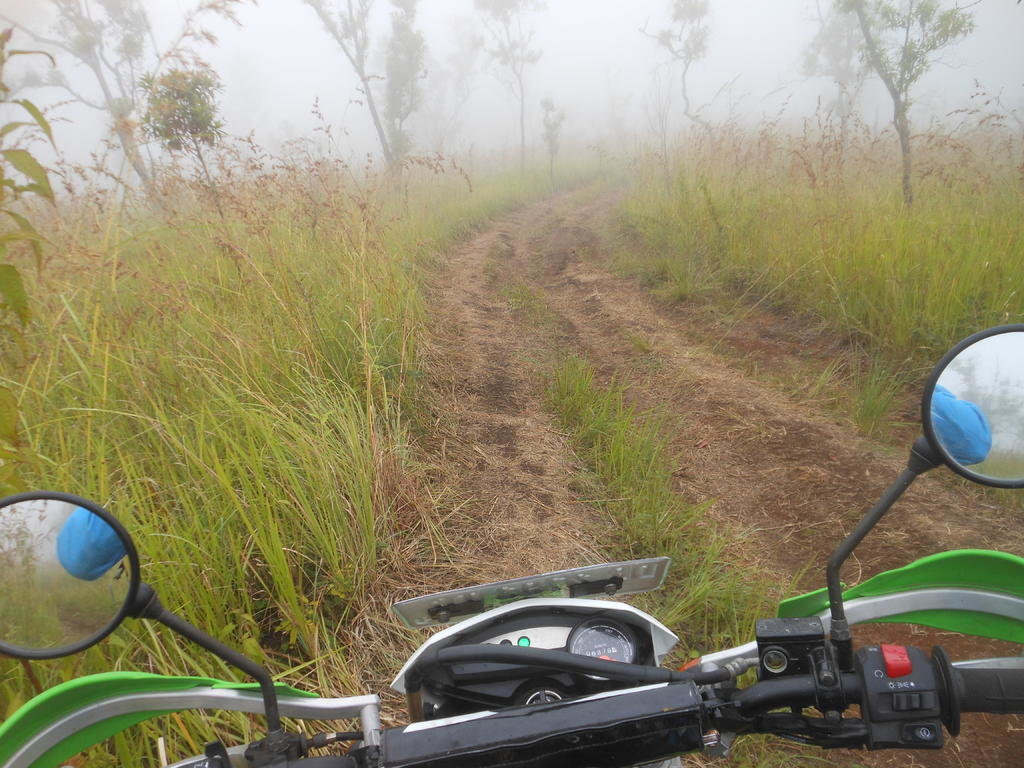 I mounted the bike and set off. When I reached the crossing I didn't hesitate. Down I went, into the gloom. I gunned the engine, just before the river bed and, bucking and rolling, rear tyre clawing at the sand, I powered up before starting to lose momentum. Just when I thought all was lost, the flat rock appeared. My back wheel found traction and sling-shotted me upwards with enough force to get me to the top of the rise. I was a lather of sweat and it wasn't a hot day! 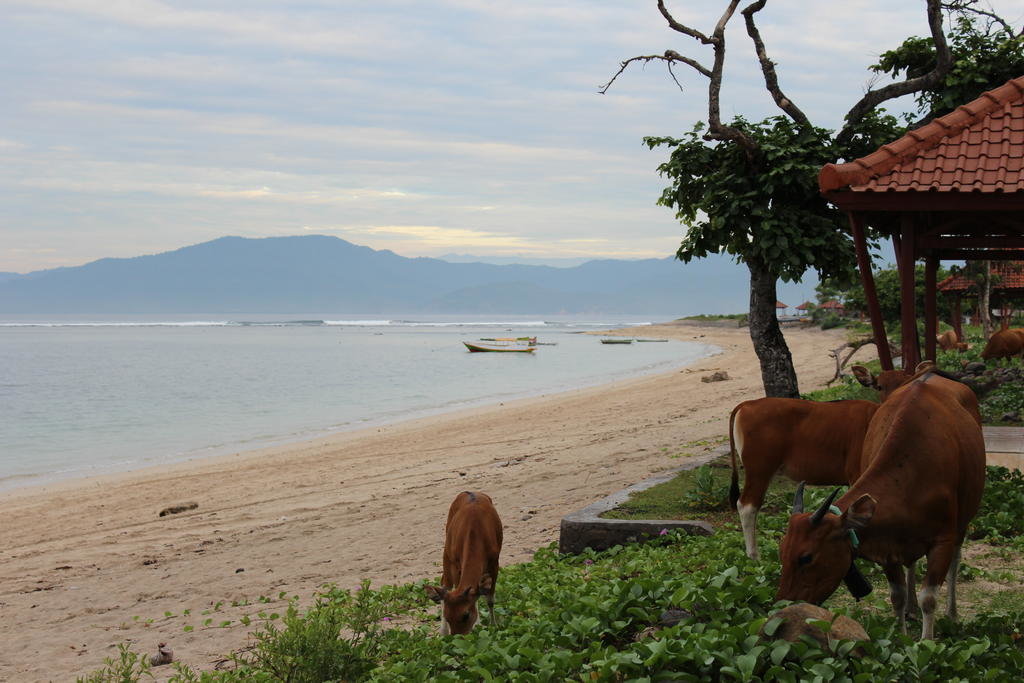 I reached the road without incident and made for Hu'u beach, about two hours away, south-west of Dompu; a convenient spot to lick my wounds. My old friend, Robbie at Monalisa, gave me a warm welcome. A shower, a shave and a good feed set me up for a decent night's sleep and an appointment with the dream generator.


I awoke with the roosters armed with a plan. I'd head for Maluk, 260 kms away or the south-west coast. I breezed past the Bugis fishing hamlet and took breakfast at Rasabau village. In and out of Dompu in a flash, I was soon into the sweeping bends that take you over the range and down onto the Soriuti Plain. The countryside was green and bursting with fertility; a stark contrast to when I passed this way during 2014s big dry. I sped along the valley floor and then started the next climb. To my left the road overlooked a patchwork of fields. The harvest was in full swing and, where the verge allowed, a golden bounty of corn was spread out on tarpaulins to dry. 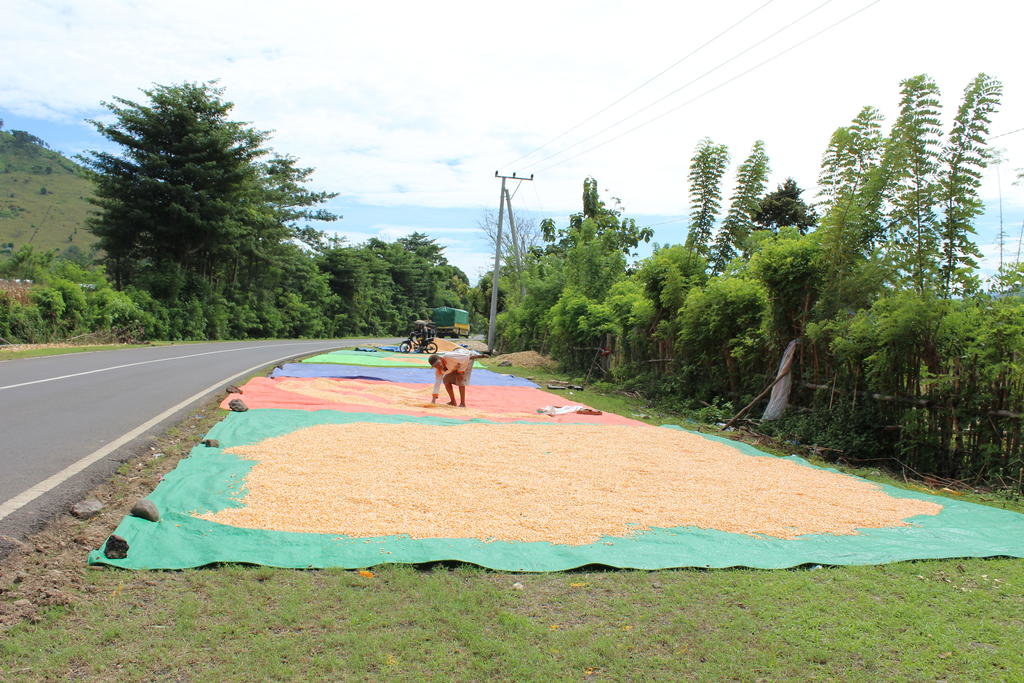 The north coast scenery is simply stunning. Jungle-clad hills caress the mangrove encrusted shoreline of Telok Salleh, its calm waters the perfect haven for the fishing fleet that depends of its bounty. In places troops of long-tailed macaques patrolled the roadside, a white-chested sea eagle dined on the carcass of a fair-sized monitor rendered flat by a truck's Michelins - the road is rarely boring. 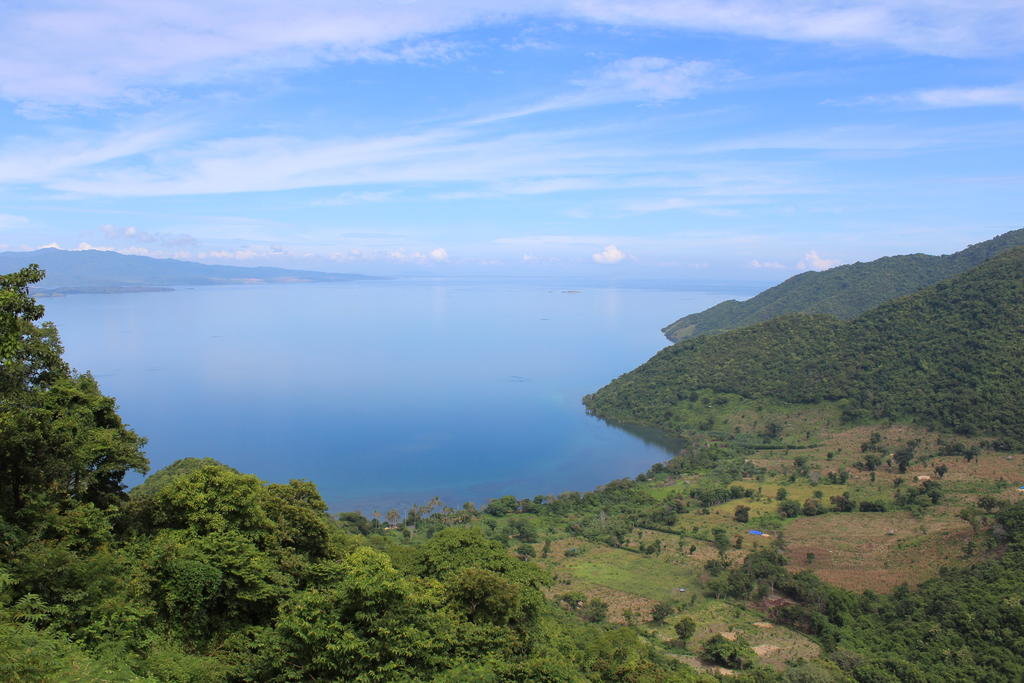 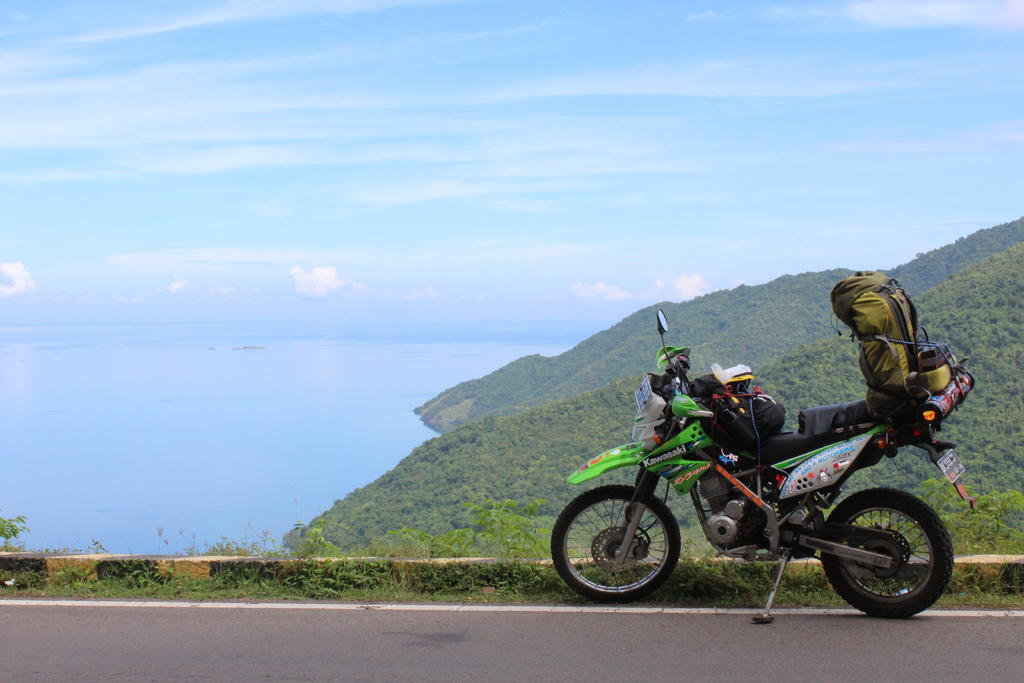 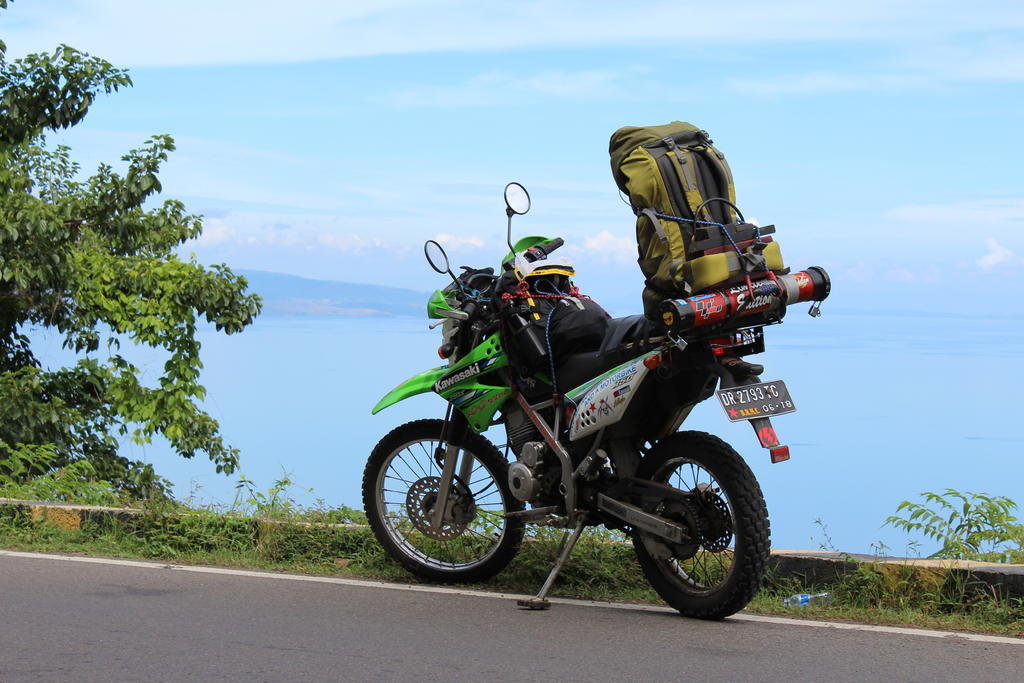 Around lunchtime, I pulled up at one of my favourite haunts: Warung Ikan Bakar, Telok Santong. I'd been stopping by for six years to dine on fresh fish barbequed over hot coals. Served with a salad of cucumber, cabbage, coriander, a spicy sambal and a dish of soy sauce it was the perfect way to kick back and rest for an hour. Known to every truck driver in Sumbawa, the business had flourished over the years. Ibu Baitiri, the enterprising owner, was born in Sumbawa of Javanese parents who had migrated in the 70s. Her father started farming and then producing roof tiles. She'd set up business in 2008 with three little pavilions, their feet planted in the calm waters that lapped the shoreline of the inlet. Now there were fourteen pavilions and a staff of six. Ibu Baitiri had four kids and proudly told me that her eldest was studying at university in Java. She was a hard-working woman and smart too. She didn't go to market anymore. Instead, traders brought fish to her. Knowing that she only bought the best, they always brought the best so everyone was a winner. After a slap-up meal and a pleasant conversation with a retired agricultural officer, I made my goodbyes and headed for my bike. Whilst gearing up, I was approached by three young women who asked if it would be alright if they talked to me. Is the Pope from Argentina? They were English teachers from the senior high school in Plampang, explained Kadarwati. Her colleagues, Cutradewi and Wulandani said that they rarely got a chance to meet a native English speaker. They had never seen a tourist in Plampang. By late afternoon I'd made it beyond Sumbawa Besar via the by-pass. But the weather was closing in. Dark clouds, coming from the direction I was heading, massed on the horizon. The wind sprang up; large droplets were bouncing off my cheeks. It was time to look for shelter. I found an abandoned building, complete with veranda but, by the time I got in out of the rain, I was semi-soaked. 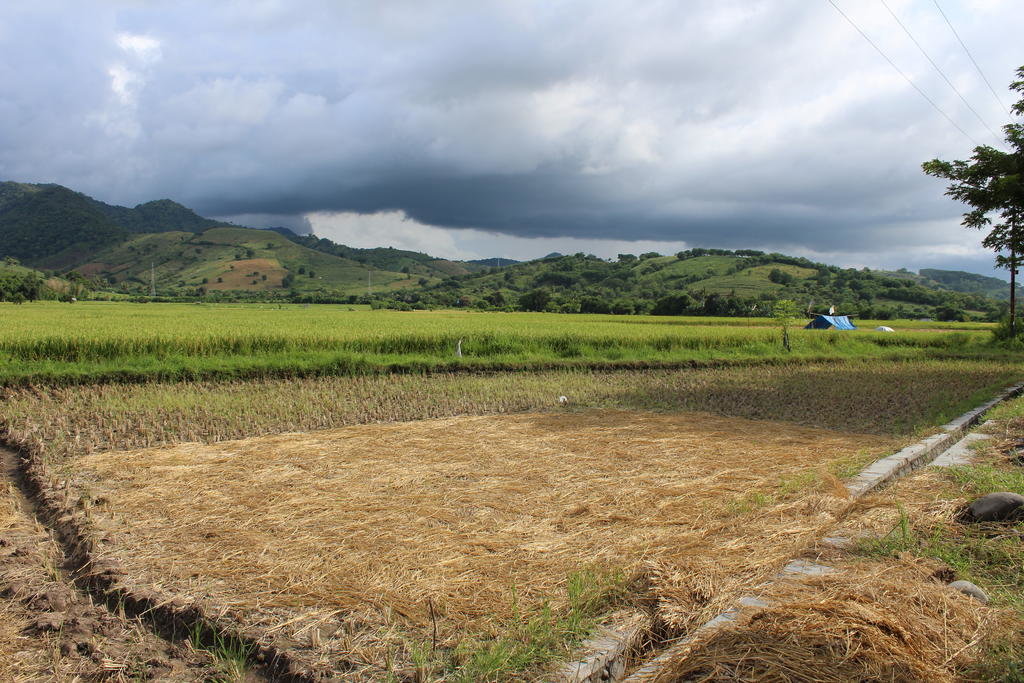 I donned my wet weather gear and pushed on. The rain sheeted down and a veil of gloom dropped over the road. Most traffic had stopped but I battled on, for a while, until my engine began to run rough after being showered by water thrown up by a passing truck.

I took shelter again at a warung along with a dozen other riders. The rain hammered on the tin roof of the veranda; it was digging in. I had a decision to make. Maluk lay two hours away, with no guarantee that my engine would run smoothly in the drenching rain. The ferry home to Lombok was half an hour distant. Taking the latter option would see me make landfall in the dark at Kayangan Harbour and I'd still have a two hour ride to get home. Of course if it was raining in Lombok my gamble would have failed. I decided to take a punt and turn for home. My luck was in. Kayangan had seen some rain but it had stopped well before we docked. I coasted out the port gates and swept along the corniche that led to town.


After a two hour battle with the poorly adjusted headlights of on-coming traffic, I made it home at 9.30 after a fourteen hour day. I had to accept that I had failed for the second time to reach my goal. I'd covered 1000 kilometres in three days aboard my KLX150. I'd met some lovely people and seen some glorious scenery. I'd had an adventure and I'd survived it. Travel: it's not only about the destination, it's about the trip. Nice stuff thanks very much for showing us the area..

You're welcome. If you haven't already been, then come over to Indonesia sometime. There's a lot to see and a lot has never been visited.

Kembali. If you are ever over this way don't be a stranger, get in touch.

An extremely interesting report there, have you had problems with the clutch before?
My KLX 150 has covered 16,000 km and no problems with mine but then again I am running the gearing from the KLX 125

hows old Blighty colin ??? i made it back to China ok hope you are fine

Captain_Slash said:
An extremely interesting report there, have you had problems with the clutch before?
My KLX 150 has covered 16,000 km and no problems with mine but then again I am running the gearing from the KLX 125
Click to expand...

I think the problem was a combination of over use and lack of free play in lever. 15 km of sometimes very steep uphill over rough, slippery (and potentially very awkward terrain when you're on your own) caused severe over heating. Clutch was still slipping in 4th and top when I got back down to the main road so I adjusted the free play and haven't had any issues since. Have done 7000 km now and bike has been good.
You must log in or register to reply here.
Share:
Facebook Twitter Reddit Pinterest Tumblr WhatsApp Email Link
Top Bottom