A new feature in BaseCamp (compare to MapSource) is the ability to directly use .img maps when your GPSr is connected to the computer in USB Mass Storage mode. This allows to use any .img maps without installing them. But there are two problems with this - first, access to the memory card is very slow this way, and second, you don't always want to plug your GPSr into your computer to use BaseCamp. Both problems can be solved by putting the memory card into a fast card reader and plugging that into your computer (or, for example, I can use my notebook's internal card reader). BaseCamp will see the removable device and not distinguish it from the real GPS. Basically any removable drive (memory card in a card reader, USB flash drive, but NOT an external hard drive) will be recognized by BaseCamp, just create a Garmin folder on that drive and put the maps in there.
However to me it seems quite strange/stupid to require to have a memory card or a USB drive always connected to use the maps, so I researched a bit and found out a way to do it. First, I tried the Windows 7 built-in Virtual Hard Disk (VHD) feature. But unfortunately the virtual disk created is not recognized by BaseCamp as it's not marked as a removable drive but rather is a removable hard disk. Then, I found the solution.

To make a virtual disk, I installed ImDisk Virtual Disk Driver (free): Tools and utilities for Windows
Then I created a small 8Mb disk image, making sure I check the "removable media" checkbox, otherwise BaseCamp won't recognize it, which I mounted it as disk M.
Formatted it as NTFS - it's not a problem for BaseCamp. Then I created a junction from M:\Garmin pointing to D:\media\gps\maps - my hard disk where I've got the .img maps stored, using this command from the shell: mklink /j m:\garmin d:\media\gps\maps
Then I ran BaseCamp and voila - it's showing the maps from there. The reason for using the Junction instead of making a bigger virtual disk and just copying the maps over there is to avoid wasting disk space (or ending up with a virtual disk that doesn't fit all your maps at some point). Basically the virtual disk is almost empty and just links to another directory on my main hard disk. So there will be no need to grow or shrink the virtual disk image file.
Unfortunately ImDisk doesn't offer the feature of remounting the virtual disk on system reboot, so I created a task in the Task Scheduler, that triggers after boot, and executes the remount command for my image:
C:\Windows\System32\imdisk.exe -a -o rem -f D:\media\gps\maps\maps.imdisk -m M:

There is another catch with using .img maps with BaseCamp. BaseCamp, and this this was done on purpose by Garmin, only shows Garmin original maps. But actually you can make any .img show up fine in BaseCamp, using JaVaWa Device Manager (free): JaVaWa GPS-tools | JaVaWa Device Manager
I ran this program, selected my virtual disk M:, clicked on Manage Maps, then there's the list of maps on M:, and on some of them there is an icon "Visible in BaseCamp". The ones that don't have this icon, I selected and clicked the button on the toolbar "Toggle visible in BaseCamp". Started BaseCamp and all my maps are visible now. Not sure exactly what this does but it does write some changes to the map itself - if you copy this "visible" map to another removable drive or the GPS itself, BaseCamp will be able to see it from there as well.

I'm just learning BaseCamp but it was not so easy to find this information, so I thought maybe it will be useful to somebody.

Adding this to the thread also as others who search might find the above and this is relevant.

==============
OK I want to say Thanks.. That javawa tool is absolutely essential if using multiple mapsets with basecamp..

Previously basecamp would only see my maps.. On the garmin device, while in USB mode.. But then cannot write to the device, until its connected in garmin mode and cannot 'import' the maps.. So your constantly rebooting the garmin, changing it from USB to garmin mode, losing your map, or unable to send the GPS the data.. I have no idea who thought this was a viable workflow but this is what the public stocks were invented for, that or public stonings.

One issue I had with the app was that, due to not reading any manuals, I put the maps onto a thumb and told the app to make them visible.. The app says they were.. They were not.. They needed to be 'exported to' the thumb which just put them in a garmin subfolder like they would be on the device.. Simple but I didnt see any obvious instruction that this was what needed to be done. I suspect manually making the /Garmin/ folder would be enough.

Now I can keep all my maps sets on a USB stick, and switch between them with basecamp, while also keeping my GPS in garmin comms mode, and send waypoints and tracks to it.. Thats almost user friendly.

One big reason to get a big Android tablet - you can run the Orux Maps app and open/ view/ run all the .img Garmin maps files you want without any messing around, you just drop them in the mapfiles folder and they will open. Had a quick mess around with Javawa, dragging .img files in and it didn't like them, will have to investigate further.

just tried the nthai rc map in my android with Orux.

It only works down to 3km scale. Any suggestions?

Connected to the locked status ?? Just a guess.. 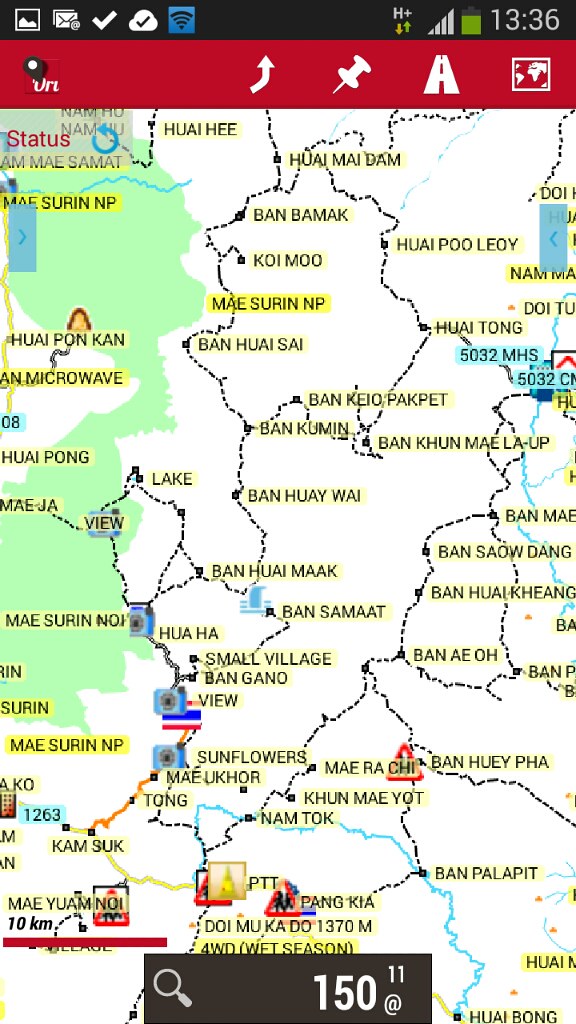 on a Samsung Note 2
Y

What phone ? What Adroid version?


I've just upgraded my Galaxy S2 to Jelly Bean (4.1.2) and am having issues zooming.

So farI have tried putting the .img on a sdcard, and tried javawa, but cannot get the new nthai 6.03 map to show in Basecamp.
I just updated basecamp to the latest version.
Also basecamp does not show my GPS when connected, so I have to do my transfers via mapsource

I will probably now uninstall basecamp and start again.

alexuk said:
So farI have tried putting the .img on a sdcard, and tried javawa, but cannot get the new nthai 6.03 map to show in Basecamp.
I just updated basecamp to the latest version.
Also basecamp does not show my GPS when connected, so I have to do my transfers via mapsource

I will probably now uninstall basecamp and start again.
Click to expand...

[h=1]How To Load .img Files Into MapSource or BaseCamp With MapSetToolkit[/h]Author: Dan Blomberg | Last updated April 19th, 2009 at 04:27pm
[h=2]Introduction[/h]This tutorial will help you take .img files and load them into MapSource so you can install them on your Garmin GPS unit easily.
Chances are you do NOT need this tutorial. It could be easy: If you downloaded the map from GPSFileDepot and it had a setup wizard (where you kept clicking next to install the map) the files are already loaded into MapSource so you can just load the maps onto your GPSr with this tutorial.
[h=2]Getting the Necessary Software[/h]This tutorial will require you to have two free pieces of software.

[h=2]Installing the .img Files In MapSource or BaseCamp[/h]Make sure you already have an .img file or a set of files that you want installed.
[h=3]The Map Doesn't Have A .tdb File[/h]This part of the tutorial is for maps that don't have a .tdb file; if you have a .tdb file click here.

[h=3]The Map Has a .tdb File[/h]Follow this part of the tutorial if the map you downloaded has a .tdb file and a .img file that doesn't have a name containing only numbers.

[h=2]Conclusion[/h]Now that you have the map installed you can freely use it as you see fit. If you want you could also create an executable setup file to help others not have to go through these steps.


From : How To Load .img Files Into MapSource or BaseCamp With MapSetToolkit - GPSFileDepot
Last edited by a moderator: Nov 24, 2018

Just kidding...I found the Garmin is pretty easy, complete and quite accurate, could be a nice alternative.